Small business owners said the financial reality complicates their reopening plans, especially in sectors that will welcome customers at reduced capacities like restaurants. The situation is also an obstacle for businesses that received PPP funds and want government loans forgiven.

Mike Costa walked us around the Abington Ale House and described some of the changes that will be in place when his restaurant is eventually able to open its doors to customers: plexiglass separating booths, hand sanitizer dispensers and disposable menus.

For now, the traditionally bustling business is only providing takeout. Costa estimates that the revenue only accounts for about 8-10% of the typical cash flow.

“One word: crazy,” the 30-year restaurant veteran said about the current restaurant landscape.

Costa said he couldn’t remember the last time he had to lay off an employee. Then, suddenly in March, he had to add about 80 workers to the Massachusetts unemployment rolls when the COVID-19 emergency shutdown began.

The interesting twist? Some of Costa’s laid-off employees are making more money now, thanks to a federal coronavirus relief package that gives workers an additional $600 per week on top of their traditional state unemployment benefits.

Congress added the money to help workers stay home and avoid spreading COVID-19. It is currently scheduled to last until the end of July.

“We’ve had some employees say they are doing unbelievably well,” Costa said. “Some have said, ‘Why would I come back to work if I can make that kind of money?’”

Heather Quinlan told me she is in a similar position with her yoga studio in Burlington. She moved her classes at Bikram Yoga online and currently has six instructors collecting unemployment.

It’s still unclear when she will be able to reopen the studio and when employees will feel comfortable returning to work.

“The situation is kind of complicated by that extra $600,” Quinlan told me. “You can’t really blame anybody not wanting to risk that amount of money.”

Here’s how the math works:

The average weekly benefit in Massachusetts is about $555. To be eligible for that amount before the pandemic, a worker with no children would need to have been making around $27.69 an hour before they were laid off. That's about $1,107 per week, or an annual salary of around $57,595.

Before the pandemic, that worker would have received only about half of their weekly salary from unemployment. But now, with the extra federal boost, they’d get $1,155 -- their full paycheck, plus about $50 more per week.

Workers further down the pay scale come out even further ahead. For example, a grocery store worker making the state minimum wage of $12.75 an hour would get $345 more per week from unemployment than they would punching in full time at their job.

Want to see that explained another way? Watch a breakdown of the math below:

“The unemployment benefits that the state offers coupled with the federal benefits certainly creates a perverse incentive for some workers to stay home,” said Christopher Carlozzi, the state director of the National Federation of Independent Business, a nonprofit that advocates for small businesses.

Current rules say the loan is only forgiven if the majority of the money is used on payroll and getting employment back to pre-pandemic levels.

Quinlan told me she hopes the requirements are loosened to allow for more of the funds to be used for rent and utility payments, her largest cost as the business remains closed. At the earliest, the yoga studio would not likely reopen until late June, phase three of the state’s plan announced Monday.

“If the PPP just turns into another loan for the business, that’s not an ideal situation,” Quinlan said. “I don’t think it’s fair to say, ‘We’re going to close you down for more than two months.’ And then when you reopen, you have more debt.”

Costa said his restaurant qualified for the second round of PPP funding. However, the half-million dollars is still just sitting in a checking account. The business owner does not want to risk having to pay back the money with the restaurant landscape still so uncertain.

Costa hopes employees will be anxious to return to work, even though the restaurant will be operating at far less than full capacity.

“We’re just going to go down the list and tell them, ‘Okay, we need you to come back.’ And we’re hoping they do,” Costa said. “That $600 payment doesn’t last forever.”

If you are offered your job back and turn it down, you risk losing your benefits unless you can show you need to stay home to care for someone affected by coronavirus or for a child while schools and day cares are closed. 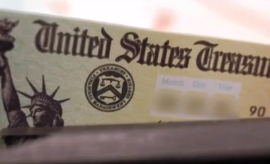 2 Men in Mass., RI Are First in US Charged With Defrauding Paycheck Protection Program