To be included on Massachusetts' list of low-risk states for travel, the location must have fewer than 10 average daily cases per 100,000 people and a positive COVID-19 test rate below 5%

Missouri, Oregon and Washington state were designated lower-risk states Friday. Puerto Rico and Hawaii had been the only locations in the United States considered low-enough risk for quarantine-free travel.

The change for travelers from Missouri, Oregon and Washington goes into effect Saturday morning after midnight, the Massachusetts Department of Public Health said.

To be included on Massachusetts' list of low-risk states for travel, the location must have fewer than 10 average daily cases per 100,000 people and a positive COVID-19 test rate below 5%. Both figures must hold over at least a seven-day average.

Ahead of Maine's tourism season, Gov. Janet Mills allows visitors from Massachusetts, Rhode Island and Connecticut to visit the state without quarantining or testing negative for COVID-19.

The change comes as the coronavirus surge recedes both in Massachusetts and nationwide. Maine on Friday announced that travelers from Massachusetts, Connecticut and Rhode Island no longer need to quarantine when traveling there. (Maine remains high risk under Massachusetts' travel order.)

Travelers from places that aren't on the low-risk list must fill out the Massachusetts Travel Form and quarantine for 14 days, according to the state's guidelines. That includes anyone who's coming from one of the low-risk states but stayed "for more than a transitory period of time in the last 14 days" in a higher-risk state.

There are some exemptions, including for people who are going to higher-risk states just to commute or go to school. See the full order, which includes the exemptions, here.

More on Travel in Mass. Amid COVID 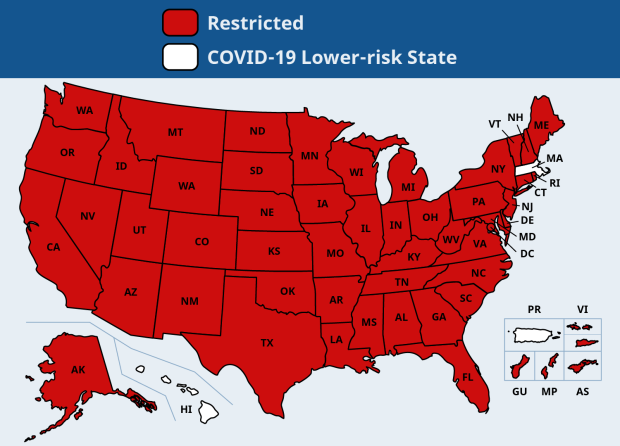