Trump's Hospitalization, Condition After Positive COVID-19 Test: What We Know

As of Friday night, at least seven people who attended the Supreme Court nomination announcement event on Saturday at the White House have tested positive for the virus

The Marine One presidential helicopter took off from the White House lawn to transport the president to the hospital as a precautionary measure, according to a senior administration official.

Trump announced early Friday morning that he and first lady Melania Trump have tested positive for COVID-19. White House officials have repeatedly said the president is experiencing “mild symptoms.” The news comes just four weeks before Election Day and after a week full of campaign events.

As the leader of a nation that's seen over 7 million coronavirus cases and more than 200,000 deaths, Trump is now facing the very threat he largely downplayed for the past six months, including on the presidential debate stage just three days ago.

She is the closest aide to President Donald Trump to test positive for the virus.

A senior administration official Friday afternoon said President Trump would be hospitalized at the Walter Reed National Military Medical Center as a precautionary measure after consultation with physicians.

The official said Trump will work out of the hospital for the next few days, adding that his symptoms are still mild, that he's in good spirits and doing well.

Trump received "a single 8-gram dose of Regeneron's polyclonal antibody cocktail. He completed the infusion without incident," according to the White House. Trump also has also been taking zinc, vitamin D, famotidine, melatonin and a daily aspirin.

COVID-19 symptoms can appear as early as two days and as long as 14 days after an exposure, according to the Centers for Disease Control and Prevention. Most people who are infected develop symptoms after about five days, although approximately 20% to 40% who are infected don’t develop any symptoms.

Up to half of patients who are hospitalized don’t have a fever when admitted but nearly all develop one. How people fare varies widely — some seem to be recovering and then suddenly worsen.

Trump published a video on Twitter thanking supporters for their well-wishes.

How Did Trump Get the Virus?

It's not yet clear exactly how the president and first lady got the coronavirus.

However, the first couple were tested Thursday after a top White House aide, Hope Hicks, tested positive for the coronavirus. Hicks began to feel symptomatic while flying back from a campaign event with the president and several other Trump administration officials Wednesday night. She quarantined herself on the plane, but she had spent much of the past week with the president.

An RNC official confirmed Friday that Chairwoman Ronna McDaniel learned she had tested positive Wednesday afternoon and has been at her home in Michigan since last Saturday after a family member's positive test. McDaniel was last with Trump a week ago, according to The New York Times.

Utah Sen. Mike Lee and University of Notre Dame President Rev. John I Jenkins both said Friday that they tested positive. Both visited the White House on Saturday, Sept. 26, when Trump announced that he nominated Judge Amy Comey Barrett to the Supreme Court.

Conway was also involved in the Trump campaign's preparations for Tuesday's presidential debate.

What Is the White House COVID-19 Protocol?

Senior staff have been tested for COVID-19 daily since two people who work at the White House complex tested positive in early May, prompting the White House to step up precautions.

The measures include deep and frequent cleaning of the West Wing and requiring staff who serve Trump and are close to him throughout the day — such as White House residence staff, his military valets and members of his Secret Service detail — to wear face coverings, the official said. Everyone who comes into contact with the president also receives a quick-result test.

Yet since the early days of the pandemic, experts have questioned the health and safety protocols at the White House and asked why more wasn’t being done to protect the commander in chief. Trump continued to shake hands with visitors long after public health officials were warning against it and he initially resisted being tested. He has been reluctant to practice his own administration’s social distancing guidelines for fear of looking weak, including refusing under almost all circumstances to wear a mask in public. 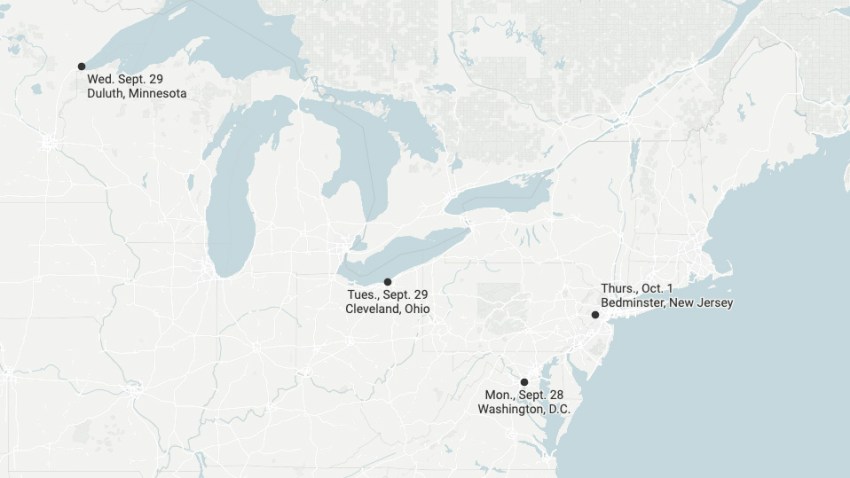 Where Trump Has Been and Whom He's Seen 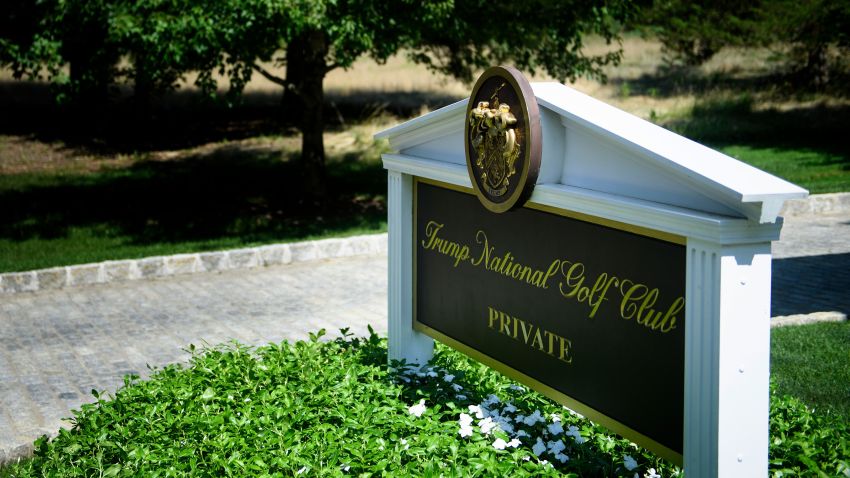 What Is the Risk to Trump's Health?

At 74 years old, Trump is at higher risk of developing severe complications from COVID-19.

People ages 65 to 74 are seven times more likely to be hospitalized for COVID-19 than those who are 18 to 29 years old, according to the U.S. Centers for Disease Control and Prevention. The risks rise exponentially at older ages. And about 80% of deaths in the U.S. from COVID-19 have occurred in those 65 or older, the CDC reports.

In 2018, Trump was diagnosed with a form of heart disease common among men in his age group, according to results of his annual physical at Walter Reed National Military Medical Center, NBC News reports. The president's physical last year revealed he had a body mass index of 30.4, which would categorize him as obese — thought just barely, according to to the National Institutes of Health. Both conditions put him at greater risk for severe complications from COVID-19.

Trump also takes a statin drug to lower his cholesterol, and that also raises his risk for COVID-19 complications, doctors said.

White House Chief of Staff Mark Meadows spoke with reporters about the condition of President Donald Trump, who tested positive for COVID-19.‹›

What Happens If Trump Gets Sick and Can't Perform His Duties as President?

While there is currently no evidence that Trump is seriously ill, the positive test raises questions about what would happen if he were to become incapacitated due to illness. The Constitution’s 25th Amendment spells out the procedures under which a president can declare themselves “unable to discharge the powers and duties” of the presidency. If he were to make that call, Trump would transmit a written note to the Senate president pro tempore, Republican Sen. Chuck Grassley of Iowa, and House Speaker Nancy Pelosi, D-Calif., who took a test Friday and tested negative. Pence would serve as acting president until Trump transmitted “a written declaration to the contrary.”

Will This Affect Trump's Work and His Campaign?

The Trump campaign announced Friday that all events involving the president and his family will either be turned into virtual events or postponed until further notice.

Trump had been scheduled to attend a fundraiser at his Washington, D.C., hotel and hold a political rally in Sanford, Florida, on Friday evening. But just after 1 a.m., the White House released a revised schedule with only one event: A phone call on "COVID-19 support to vulnerable seniors."

Trump's physician wrote in his memorandum, "Rest assured I expect the President to continue carrying out his duties without disruption while recovering."

With the election only 32 days away, Republican strategists acknowledge the timing is bad the president. The virus has now grounded Trump in a quarantine, denying him the large public rallies that fuel his campaign.

Does Biden Have COVID-19?

"I hope this serves as a reminder: wear a mask, keep social distance, and wash your hands," Biden tweeted Friday after announcing their negative diagnosis.

Biden was on the debate stage with Trump for more than 90 minutes earlier in the week. While the two candidates maintained their social distance throughout the debate, many in Trump's campaign were not wearing masks.

Kristin Urquiza, a Biden guest at the debate who sat in the front row and has vocally condemned President Trump’s handling of the coronavirus pandemic, told NBC News that she is "terrified" after learning she had been exposed to the virus given that she knows the "darkest results of COVID-19" after seeing her father succumb to the deadly disease. Urquiza later told MSNBC's Ayman Mohyeldin she was getting a COVID-19 test on Friday.

Democratic presidential nominee Joe Biden and his wife Dr. Jill Biden have tested negative for the coronavirus. Biden was in close proximity to President Donald Trump at the presidential debate in Cleveland on Tuesday.

The Biden campaign said the Democratic candidate will appear at his scheduled campaign events later in the day.

In August, the Biden campaign announced that he and running mate Sen. Kamala Harris would be tested "on a regular basis to help further protect those around them" and it would announce if either candidate tested positive. The campaign also regularly tests staff.

Biden, who spent much of the summer off the campaign trail and at his home in Delaware, has since resumed a more active campaign schedule, but with small, socially distanced crowds because of the virus. Biden also regularly wears a mask in public, something Trump mocked him for at Tuesday night’s debate.

Has Pence Been Tested?

Pence is tested every day for the virus, O’Malley confirmed.

Has Anyone Else Tested Positive?

The White House medical unit said it begun contact tracing efforts to determine if anyone else who had close contact with the president or the first lady has tested positive.

Utah Sen. Mike Lee revealed Friday that he has tested positive for the coronavirus after experiencing “symptoms consistent with longtime allergies.” Lee said in his statement that he had tested negative for the virus when he visited the White House on Saturday for President Trump’s announcement that he had nominated Judge Amy Comey Barrett to the Supreme Court, an event which featured little social distancing and few masks.

Late Friday, Sen. Thom Tillis, R-N.C., announced he tested positive and would be isolated for 10 days. He was also at the White House on Saturday for the Supreme Court nomination announcement.

Another attendee at Saturday's White House event, University of Notre Dame President Rev. John I. Jenkins, also tested positive for the coronavirus. Jenkins was seen not wearing a mask at the event, and in a letter to students and faculty, apologized for "failing to lead as I should have."

The White House also learned of Hicks' positive coronavirus test — and exposure to the virus by the president and others — before Trump arrived in New Jersey for an indoor fundraiser at his Bedminster golf club, White House Chief of Staff Mark Meadows said, but allowed the event to go forward anyway. The state of New Jersey has started contact tracing on Friday for people who attended the fundraiser.

Republican U.S. Reps. Tom Emmer, Jim Hagedorn and Pete Stauber, flew with the president to and from his rally in Duluth, Minnesota, on Wednesday night. All three said Friday afternoon that their test results came back negative. South Dakota Gov. Kristi Noem also crossed paths with Trump on Wednesday when she attended a Minneapolis-area fundraiser. Spokesman Ian Fury told the Argus Leader that Noem tested negative on Tuesday and was “not a close contact” of Trump or anyone else who tested positive.

Other officials who have been in close contact with the president this week include: Trump's children and their spouses, many of whom are in the Trump administration; White House press secretary Kayleigh McEnany; Department of Health and Human Services Secretary Alex Azar; Department of Education Secretary Betsy DeVos; Office of Trade and Manufacturing Policy Director Peter Navarro; White House Chief of Staff Mark Meadows; White House Deputy Chief of Staff for Communications Dan Scavino; Rudy Giuliani, who tested negative Friday afternoon; former New Jersey Gov. Chris Christie; as well as several state representatives and other administration staff members.