The man accused of shooting and killing a Weymouth police officer and an elderly bystander on Sunday was free on bail at the time despite having failed a drug test required as a condition of his probation on a drug-dealing charge.

The Boston Herald reports that a judge allowed Emanuel Lopes to be released on bail despite having failed a drug test on April 25. He was on probation for a charge of selling cocaine to minors at the time.

Lopes reportedly told his probation officer that he had a medical marijuana card, and prosecutors did not ask to have his bail revoked. The case was continued and Lopes was allowed to go free as long as he refrained from using alcohol and drugs.

Lopes, 20, pleaded not guilty to murder charges at his arraignment Tuesday and was ordered held without bail. He is accused of shooting and killing Weymouth Police Sgt. Michael Chesna and 77-year-old Vera Adams.

Prosecutors say Chesna responded to a report of a crashed vehicle on Sunday morning when he saw Lopes throwing a rock through the window of a home. Lopes then allegedly threw another rock at Chesna, striking the officer in the head. 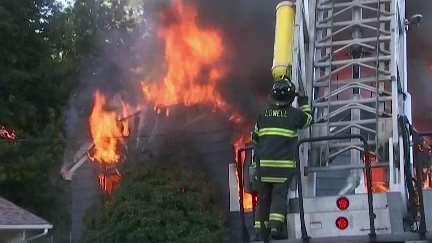 When a responding officer arrived, he fired at Lopes, striking him in the leg.

Lopes fled through several yards, arriving behind a Torrey Street home. That's where authorities say he fired three shots into the home of Adams, killing her.

An estimated 3,500 people attended a vigil for Chesna on Monday. He was honored with bagpipes, flags and an honor guard at the Weymouth High School football field.

Chesna's wake is scheduled for Thursday afternoon and his funeral will be held Friday at 11 a.m.