The collision left dozens of people injured on Friday

A train on the Green Line of the MBTA was going triple the speed limit when it crashed into another train in Boston Friday, investigators have determined.

The National Transportation Safety Board said Monday that the train in front was going about 10 mph when it was overtaken by another train going about 30 mph.

The MBTA noted last week that the speed limit in the area is 10 mph.

Two trains on the Green Line collided Friday around 6 p.m. on Commonwealth Avenue, injuring 27 aboard, including four train operators.

An MBTA operator is on administrative leave after two trains collided on Friday, injuring more than 20 people.

Riders on the Green Line Monday expressed safety concerns after learning of the development.

"Obviously, it's not OK," said BU student Donnie Howard. "It's unfortunate what happened."

"It's concerning, as a student that goes to BU that uses the B line often, it's scary to think you could be on the next train that crashes," said Katarina Soto.

"I could have been on that train. I use the T very regularly, the T and the bus system in Boston," Gowtham Asokan said.

Gov. Charlie Baker said earlier Monday he is anxiously awaiting more information about the crash, which he says could have been much worse.

"I’m really anxious to find out what happened," Baker said during an event in Everett, "because this could have been a far more significant incident than it was, given the estimates that are out there about how fast that train was traveling when it hit the other train."

Both trains were heading west out of the city when one rear-ended the other. The MBTA said 65 to 70 people were on board both trains.

Baker said he was told by officials that those hospitalized in the crash "seemed to be OK."

Two trains on the Green Line of the MBTA collided Friday, injuring dozens of people.

The National Transportation Safety Board is leading the investigation into the crash.

"We fully expect that they will generate both preliminary reports to our team and ultimately a final report and we’ll work to move on the things they recommend," Baker said.

The NTSB, a federal agency that examines transportation-related accidents and pipeline incidents such as the 2018 Merrimack Valley gas explosions, deployed four investigators with specialties in "operations, crashworthiness, and human performance" to the scene of the Green Line crash, a spokesperson said.

"At this early stage of an investigation, NTSB does not state a cause but will provide factual information when available," NTSB spokesperson Jennifer Gabris said in a statement on Monday. "Investigations involving injuries and other major investigations currently take between 12 and 24 months to complete. A preliminary report is expected to be published in a few weeks."

The NTSB's probe appears to be the agency's first into an MBTA incident in more than a decade. Records show the NTSB's last rail investigation in Massachusetts occurred in 2009, when a Green Line train collided with another train in an underground tunnel near Government Center, derailing both vehicles.

Officials placed one of four operators on board the two Green Line trains on paid administrative leave. The suspended driver has not been publicly identified.

Joe Pesaturo, a spokesperson for the MBTA, declined to identify the operator, but said the decision was made Saturday based on developments in the ongoing investigation, according to the Globe.

The employee, who has been with the MBTA for seven years, was operating the first car in the train that hit the other train from behind. No other operators have been put on leave, the MBTA said.

The MBTA has said it was not clear how fast the trains were going at the time. The speed limit at the site is 10 miles per hour. 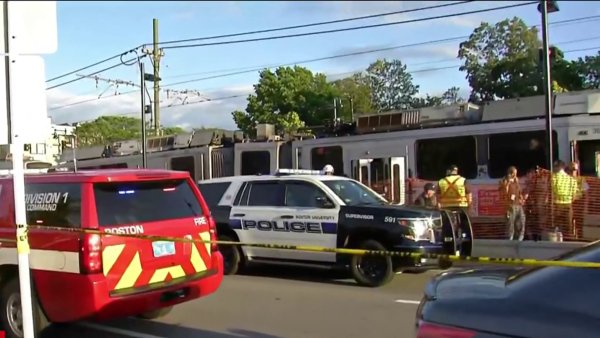 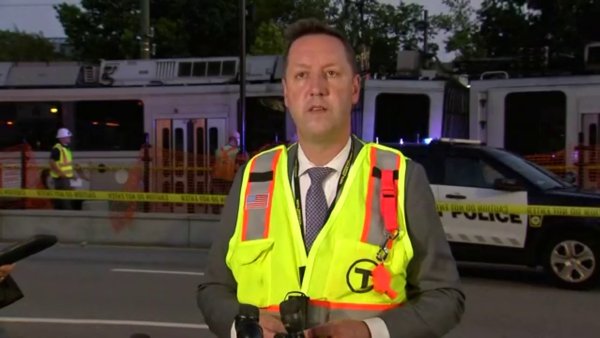 Green Line service between Kenmore and Washington Street was restored on Saturday.

T officials say there is significant damage to the infrastructure. The impact of the crash shattered one of the train's windshields.

The Green Line is currently undergoing a $170 million project designed to "reduce the risk of train collisions by installing signal overrun protection, collision avoidance monitoring, and speed enforcing transponders," the MBTA said. It will be completed in 2024.

"This should not have happened and we will determine the cause to ensure it won't happen again," Poftak said in a statement.

The NTSB recommended the Green Line Train Protection System after two high-profile accidents -- the one in 2009 and an earlier accident in 2008 where the driver was killed when she apparently fell asleep behind the controls.