‘We Have Work to Do': Baker Releases New Details About Vaccination Rollout in Mass.

Over 654,000 Massachusetts have already been vaccinated, and about 120,000 new appointments are expected to be made available this week

"I get how unhappy people are with the rollout," Baker said after touring the Fenway Park mass vaccination site. "There are some reasons for that unhappiness that have to do with the decisions we made out of the gate, which I do not apologize for."

Those decisions, he said, included vaccinating hospital workers and other health care workers first, and then structuring the rollout to address congregate care facilities, the homeless population and others considered high risk.

"I think we did the right thing here," Baker said. "But I get the fact that meant other people had to wait."

"I'm not happy with where we are," he added. "I know a lot of other people aren't either. We have work to do, and we know that."

The chair of the state's COVID-19 vaccine advisory board also explained Wednesday what he thinks can be improved.

Dr. Paul Biddinger specializes in emergency preparedness at Massachusetts General Hospital. In a one-on-one interview with NBC10 Boston, he said the state has to focus on improving efficiency and accessibility.

"The fundamental problem is clearly that there is not enough supply, but that's out of our control," he said. "What we have to control is how easily people can get their vaccine and make sure they know what's going on."

"I think it's really important for people to get access to a centralized booking system. I don't know if it's quite a bridge too far to unify all of the different hospital systems, community health centers and mass vaccination sites, but we need to make this easier for everyone," he said.

Biddinger said he was concerned to see Massachusetts was using only about half of its vaccine supply, but he is hopeful now that the numbers have started to improve.

"Now, it's at 60%, so some of these efforts to really improve utilization, to make sure shots are flowing from supply right into arms as quickly as possible, I think those are starting to pay off," he said.

The vaccine rollout is getting back on track after the nor'easter with a new mass vaccination site open in Massachusetts.

Biddinger said the board receives countless letters from groups advocating to be moved up in vaccine priority. He said the board has to make "heart-wrenching" choices. NBC10 Boston asked him why Massachusetts is not yet allowing educators to get shots when almost half the country is already prioritizing them.

"I can't comment directly what might happen with teachers, but I think it's unbelievably important to make sure we think about how we can get schools back and how we can bring back teachers," he said.

Biddinger said the board can only make recommendations to the state and cannot speak about them publicly, but discussions about who should get priority are ongoing.

There are 125 operating vaccination sites in Massachusetts, with another 40 expected to be online by the the middle of the month. To find a site near you, go to mass.gov/covidvaccine

The mass vaccination sites at Fenway and Gillette Stadium returned to regular hours Tuesday after some appointments were changed and vaccinations were curtailed due to Monday's storm, according to CIC Health, which is running both sites.

The Reggie Lewis Center in Boston’s Roxbury neighborhood, which was supposed to open Monday as a mass vaccination site for residents ages 75 and older, opened Tuesday instead. Appointments that were scheduled for Monday were automatically rescheduled for Feb. 8.

A mass vaccination site at the DoubleTree by Hilton Hotel in Danvers north of Boston opened Wednesday.

As part of a national push to get doses of the coronavirus vaccine directly to pharmacies, 18 CVS locations in Massachusetts are slated to receive shipments starting next Thursday.

The number of newly confirmed coronavirus deaths rose by 45 on Tuesday, pushing the state’s confirmed COVID-19 death toll to 14,362 since the start of the pandemic.

The number of newly confirmed cases of COVID-19 increased by fewer than 2,000 and its confirmed caseload rose to more than 502,000.

There were more than 1,600 people reported hospitalized Tuesday because of confirmed cases of COVID-19, with about 350 in intensive care units.

"This represents very significant progress since the start of the new year," Baker said Wednesday. 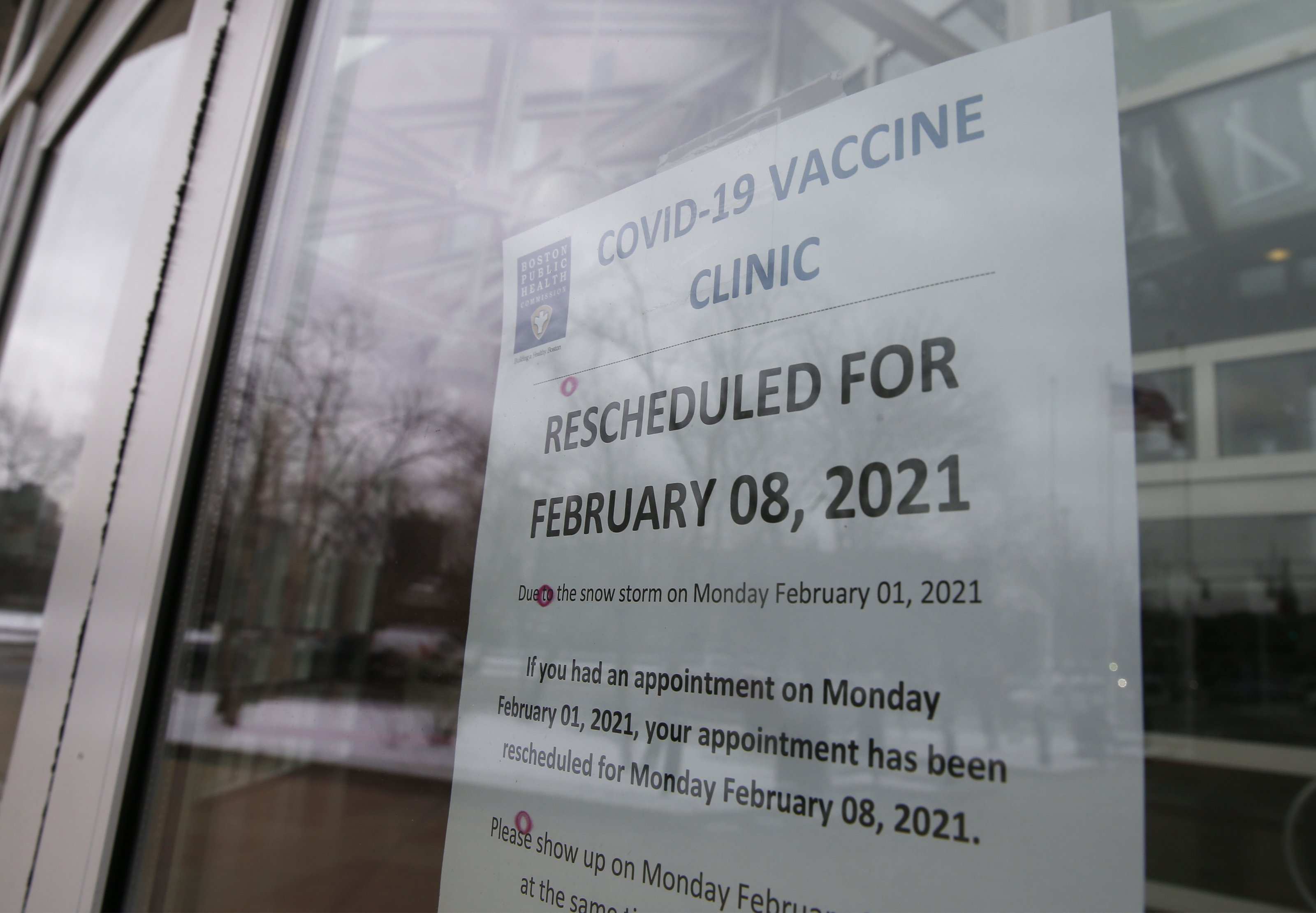