Boston celebrated Juneteenth on Saturday for the first time as a federal and Massachusetts state holiday.

June 19 commemorates the end of slavery. From Copley Square to Dorchester and Brockton, the now national holiday was celebrated across the Bay State.

There was food, music and other entertainment at a large ceremony Saturday at Franklin Park, with other events also held around the city.

The Museum of Fine arts, in partnership with New Roots AME church, hosted an exhibition about African worship and the end slavery in America.

There were pop-up shops and live music at District Hall, and a virtual dance party hosted by the Boston Ujima Project and other groups. The Dorchester Art Project hosted a paint party from 3:30 to 6 p.m.

Mass Action Against Police Brutality held a rally at Ronan Park in Boston where advocates of mixed races dissected the lasting impacts of slavery.

“When we get separated from our own humanity that way that causes inter generational trauma that we’ve got a lot of work to do to heal to get back to being fully embodied in ourselves so that then we can actually connect with other people in a more authentic way,” one rally attendee said.

Events commemorating the end of slavery are happening across New England Saturday.

Juneteenth was embodied by much more than microphones and organized events. It was celebrated on the block, on the playground, by fathers on the eve of their own day of recognition where Black history and American history intersect.

"You really just have to get to know American history. I mean all we’re really trying to do is just teach the truth,” one man said.

Boston Mayor Kim Janey was on hand for the city's celebrations Saturday and shared with NBC10 Boston what Juneteenth means to her this year, while also acknowledge there is still a lot of work to do in 2021.

"It's such an amazing day celebrating the first official Juneteenth here in the City of Boston with the first Black mayor, first woman mayor, I couldn't be more thrilled. Certainly grateful for this moment and deeply humbled," Janey said. "This day has always been important to me. Coming here to the park to celebrate Roxbury homecoming on Juneteenth has always been a very important part of my tradition, a part of my family's tradition. This is like a big family reunion."

Janey was joined Friday night by Gov. Charlie Baker in Roxbury's Nubian Square to ring in the holiday weekend. Both discussed the cultural work that lies ahead for the region.

“The work to make sure we have great schools for all of our kids in Boston. Safe playgrounds," Janey said. "Making sure that we’re dealing with environmental justice issues that too often disproportionately impact communities of color.”

Republican Gov. Charlie Baker and Boston acting Mayor Kim Janey, a Democrat, were among those who came together to mark the holiday in Nubian Square in the city's Roxbury neighborhood.

When it comes to environmental justice, Rev. Mariama White-Hammond works to make sure equity is included.

“Affordable housing and making sure we make it possible for the residents who love this city to be able to remain is really important,” the city's chief of environment said.

Friday night's gathering brought together people of different ages and races, not just honoring the end of slavery, but the joys of Black culture — a subject that is explored in author Thaddeus Miles' book.

“Being able to celebrate the innovations, the excellence, the creativity and the joy of being Black versus having to always talk about the trauma and the pain of being black,” Mile said.

More on Juneteenth in Massachusetts 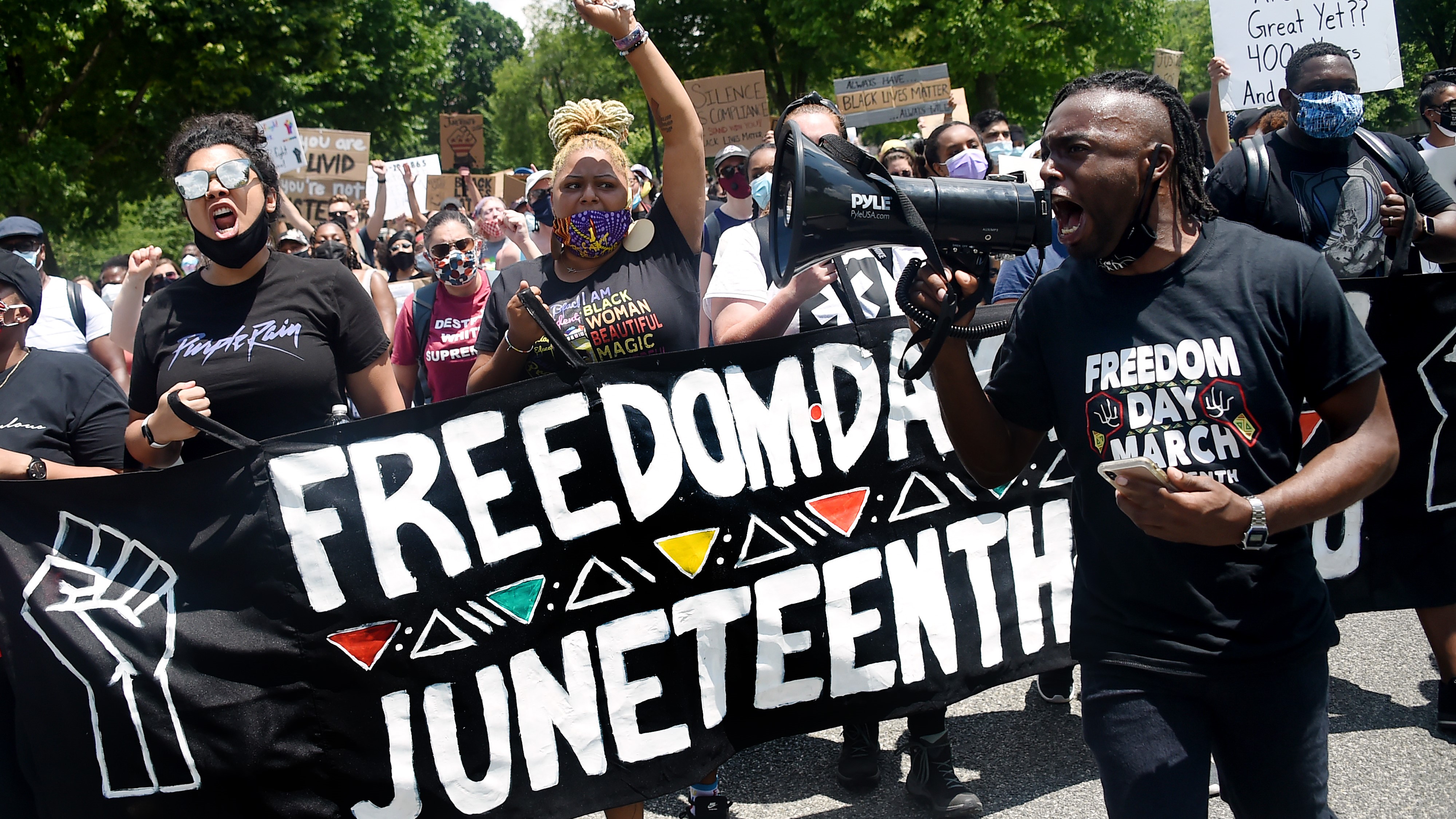 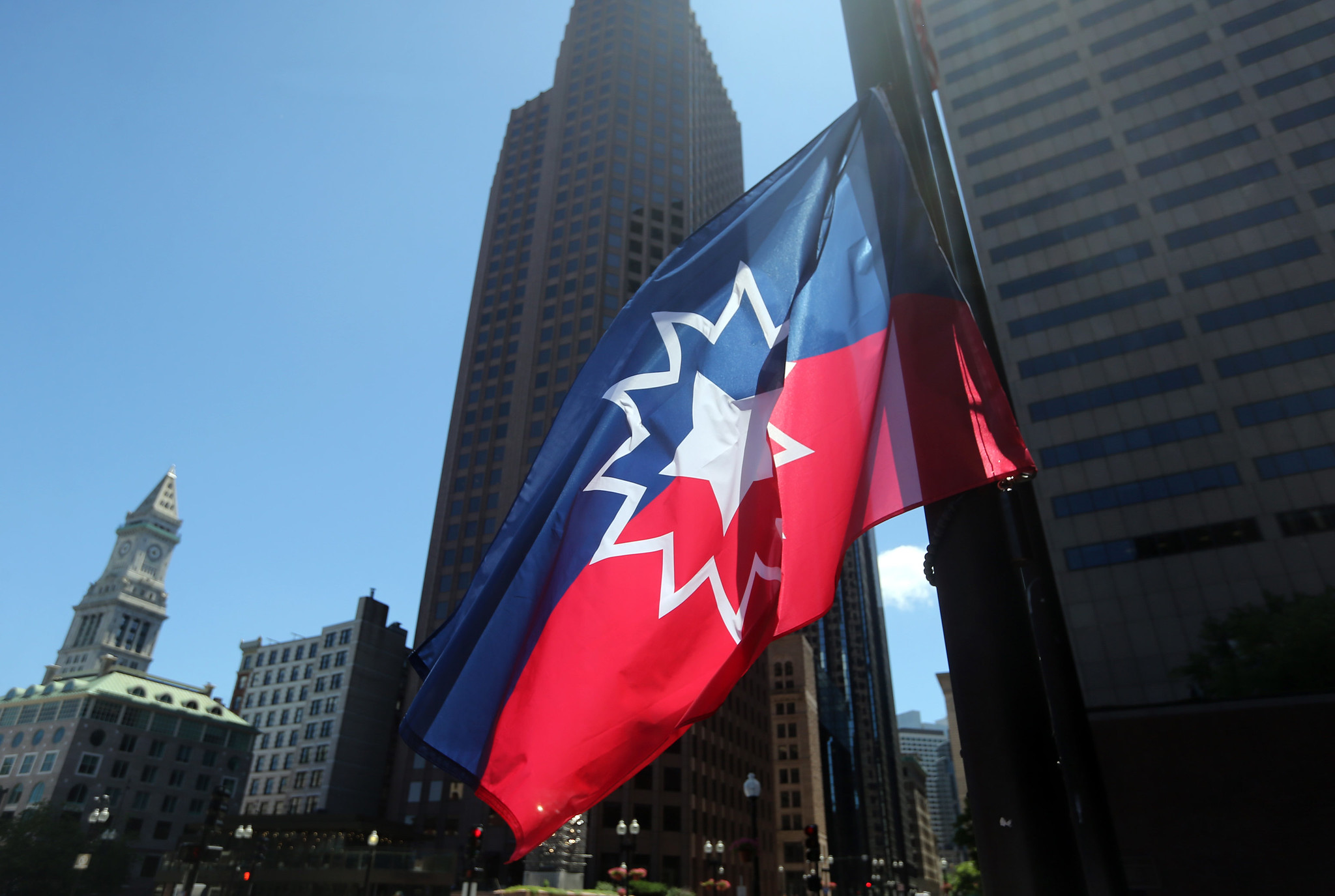 Pain transitioning to joy might look like Juneteenth becoming a state holiday last year, or even a national holiday this year. But leaders believe with that joy should come recognition of what all remains.

Earlier in the day as she and other city residents helped raise a Juneteenth flag over Boston City Hall, Janey — the first Black Bostonian to hold the city's top political office — said Black residents of the city have been celebrating the holiday for years, but welcomed the federal action.

"It means that there is a recognition of the inequality that has been here in our country over a number of years, decades, and centuries and that people are willing to do that tough work and that we're going to reflect on that and make sure that we're rolling up our sleeves to tackle what remains,'' Janey told reporters.

Among those participating in the flag-raising ceremony was Lt. Col. Enoch Woodhouse, who is one of the last surviving members of the Tuskegee Airmen, the primarily Black military pilots and airmen who fought in World War II.

"There are some areas that are not going to accept it,'' the 94-year-old Woodhouse said. "But that's why I'm happy to be a Bostonian.''