New England Braces for Major Snowfall; Blizzard Warning in Effect for Many

Officials in Boston and coastal Massachusetts communities have been preparing for the incoming storm for days, which was elevated to a blizzard warning early Friday morning.

Localized snowfall totals of over 2 feet are possible in some areas. Officials also said wind-blown snow could make travel "nearly impossible." Communities across Massachusetts declared snow emergencies and parking bans Friday to clear the roads for the plows.

"It's gonna big a big one," Boston Mayor Michelle Wu said Friday as she declared a snow emergency starting at 9 p.m. "This has the potential to be a historic storm, a huge one."

The snow emergency means anyone parked on a main street will need to move their car to make way for plows and emergency vehicles. Space savers will be allowed, except for in the South End. Boston is one of numerous communities that have declared snow emergencies and parking bans.

Boston Mayor Michelle Wu declared a snow emergency starting at 9 p.m. Friday that could remain in effect until Sunday morning. Once in effect, any cars parked on major roads and main streets will be towed.

The city has 38,000 tons of salt, 164 pieces of city owned snow management equipment and the ability to put 800 to 900 pieces of equipment on the road with the help of contractors. Still, city officials are urging people to stay off the roads, saying it could take some time to clear streets because of the high rate of expected snowfall.

Wu said the expectation right now is that Boston Public Schools will be open on Monday.

Boston Public Works crews were already starting to place barriers near the Aquarium T stop Thursday in preparation for anticipated flooding in that area. The MBTA is expected to make the call by Friday afternoon on whether the entire station needs to be closed.

Officials in Boston and coastal Massachusetts communities have been preparing for the incoming storm for days, which was elevated to a blizzard warning early Friday morning.

With larger storms like this one and rising sea levels, there’s always the concern of flooding in the Long Wharf and Seaport sections of the city. Beyond that, with snow totals predicted to be above a foot in the city, plowing and parking can become an issue.

Eversource said Friday that they have hundreds of crews from Canada to Florida responding to New England to help with this storm.

In Scituate, the town was recommending voluntary evacuations for coastal residents. Officials advised residents planning to leave do so Friday evening, or by 6 a.m. Saturday at the latest, two hours before high tide.

Sullivan said the biggest concern in a storm like this will be the safety of their crews both getting to location and doing the work once they arrive.

"We’re getting really windy gusts so for us, keeping the crews safe, sometimes they cant go up when it’s really windy," he added.

High snow totals are expected in much of the region, with crews preparing to deal with potential power outages, as well.

Residents who live along the coast should prepare for the possibility of flooding with this storm — the timing coincides with high tide.

In Scituate, the town was recommending voluntary evacuations for coastal residents. Officials advised residents planning to leave do so Friday evening, or by 6 a.m. Saturday at the latest, two hours before high tide.

"It's frightening, as it always is," said Scituate resident Bette Kincaid, who has seen her share of nor'easters over the last 25 years living along the seawall. "We've been through it before, we hope our house is strong enough to withstand some good waves, certainly the water will flood the streets."

The area could get wind gusts between 35 to 50 miles per hour during the day, which means the potential for trees down and power outages. Town officials are suggesting that residents in flood-prone areas board up and head out until the storm passes.

The town gave away between 200 and 300 sandbags Friday morning at St. Mary's to people who need them for their waterfront properties. Those homeowners filled their trunks full Friday to try to get ahead of the roaring waves that could come crashing onto their properties and potentially into their homes.

"No, it’s hard to fool mother nature, you know? She’ll just say, 'Get these sand bags out of my way!' I’ve been there done that, but we’ll try again," said Rick Sweeney, a Scituate resident living on the coast.

“Our home is raised but the basement underneath has an access to the back and so we put the sandbags there and the water still gets in but it slows it down a bit," said Christian Putnam, a Scituate resident living on coast.

Gov. Charlie Baker strongly urged everyone who can to stay home Saturday.

Amtrak has modified its services in the Northeast Saturday, including significant cancellations. See the full set of changes here.

Scituate Town Administrator Jim Boudreau talks about how the town is preparing for the blizzard as time runs out for residents to decide whether to evacuation. Officials advised residents planning to leave do so Friday evening, or by 6 a.m. Saturday at the latest, two hours before high tide.

MassDOT warned that conditions could be treacherous as state officials urged residents to stay home if possible.

Most of the MBTA lines are operating on normal service schedules, though officials warned that could change depending on conditions. For details and updates, click here.

Logan Airport said to expect delays and cancellations and warned travelers to check with their airline before arrival. Hundreds of flights have been canceled due to the storm, with New York and Boston area airports the most affected.

Some people in coastal New Hampshire are trying to make the best of the winter storm.

People across New England are hunkering down, but in Portsmouth, some local bars and restaurants are opening up.

"That's right, when it snows, it flows," said Marissa Rustici at Portsmouth Brewery.

The brewery is keeping normal hours Saturday and offering snow specials on four of its popular dark beers.

Head brewer John Bergeron says there's something about a storm that makes an iced cold beer even better.

"I always tend to look for the comfort of a nice pint after a long day snowed in and after coming in from shoveling," Bergeron said.

Local residents say at this point, their pre-storm chores are done, so now, they wait.

"I've got my cross-country skis ready, because I'm hoping if they don't plow too fast, I can cross-country in the street for a bit before they plow," said Colleen Kendall-Piel.

City Manager Karen Conard says those plow drivers are on top of things.

"We have ample staff, and some of them actually look forward to this," she said.

Conard says the city has been prepping for snow since summer.

"Actually, in July, we had a snow rodeo to run old and new folks through the training and new technology, so we are ready to go," Conard explained.

People are reminiscing about the last time it snowed this much in Portsmouth, when a city-wide snowball fight broke out in Market Square back in 2015.

"We will see if it comes back," Rustici said. "I saw some people online talking about it, we're hoping the snowball fight comes back."

Locals say they're feeling lucky to live in a place that makes the very best of blizzard conditions.

"You have to embrace it," said Terrence Parker. "It's just what you have to do to have fun up here in New England. It's what we have, it's what you got to love."

A parking ban will go into effect overnight Friday.

City leaders are urging people to stay of the roads altogether on Saturday -- the only way you should be enjoying a beer at a local pub is if you can walk, snowshoe, or ski your way downtown.

Emergency workers are getting ready for Saturday's blizzard conditions.

Rhode Island Under a Blizzard Warning

Merrick McCormack, 51, of Cranston, Rhode Island, was among hundreds who packed a Shaw’s Supermarket in neighboring Warwick for last-minute items.

With the entire state under a blizzard warning, state officials mobilized more than 500 snow plows and Gov. Daniel McKee scrubbed a planned trip to Washington, D.C.
“I don’t fuss with storms. I know in a couple of days, we’re going to be free and clear. No need to panic,” McCormack said, flashing some New England stoicism as he unloaded his groceries.

"We ask shoppers to buy what they need and save some for their neighbors," the Quincy, Massachusetts-based grocery chain said in a statement. "Supply chain and labor challenges as a result of COVID-19 have made product availability more challenging than usual."

At Maine Hardware in Portland, a steady stream of customers stocked up on storm essentials Friday as officials took the rare step of issuing a blizzard warning. 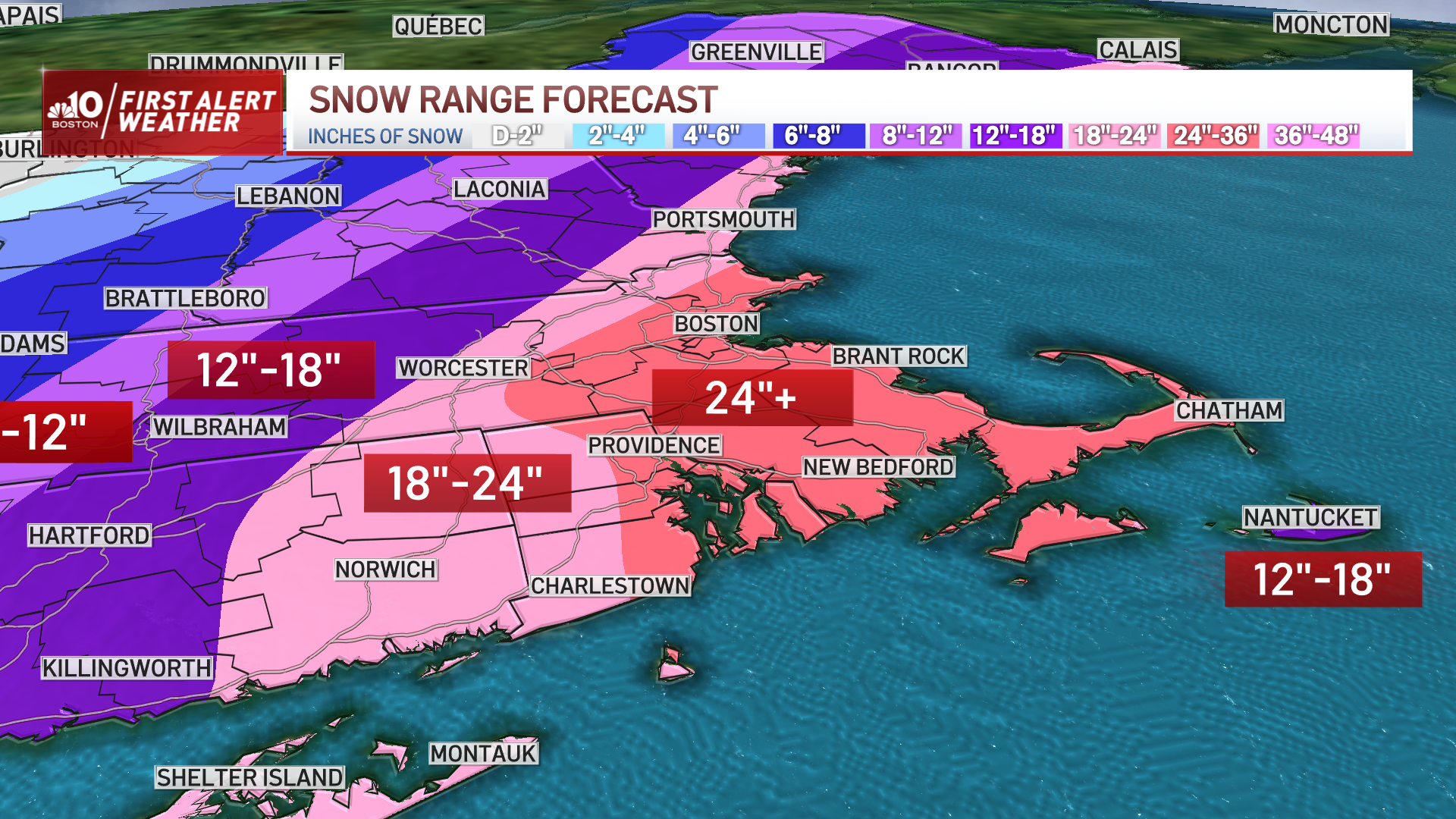 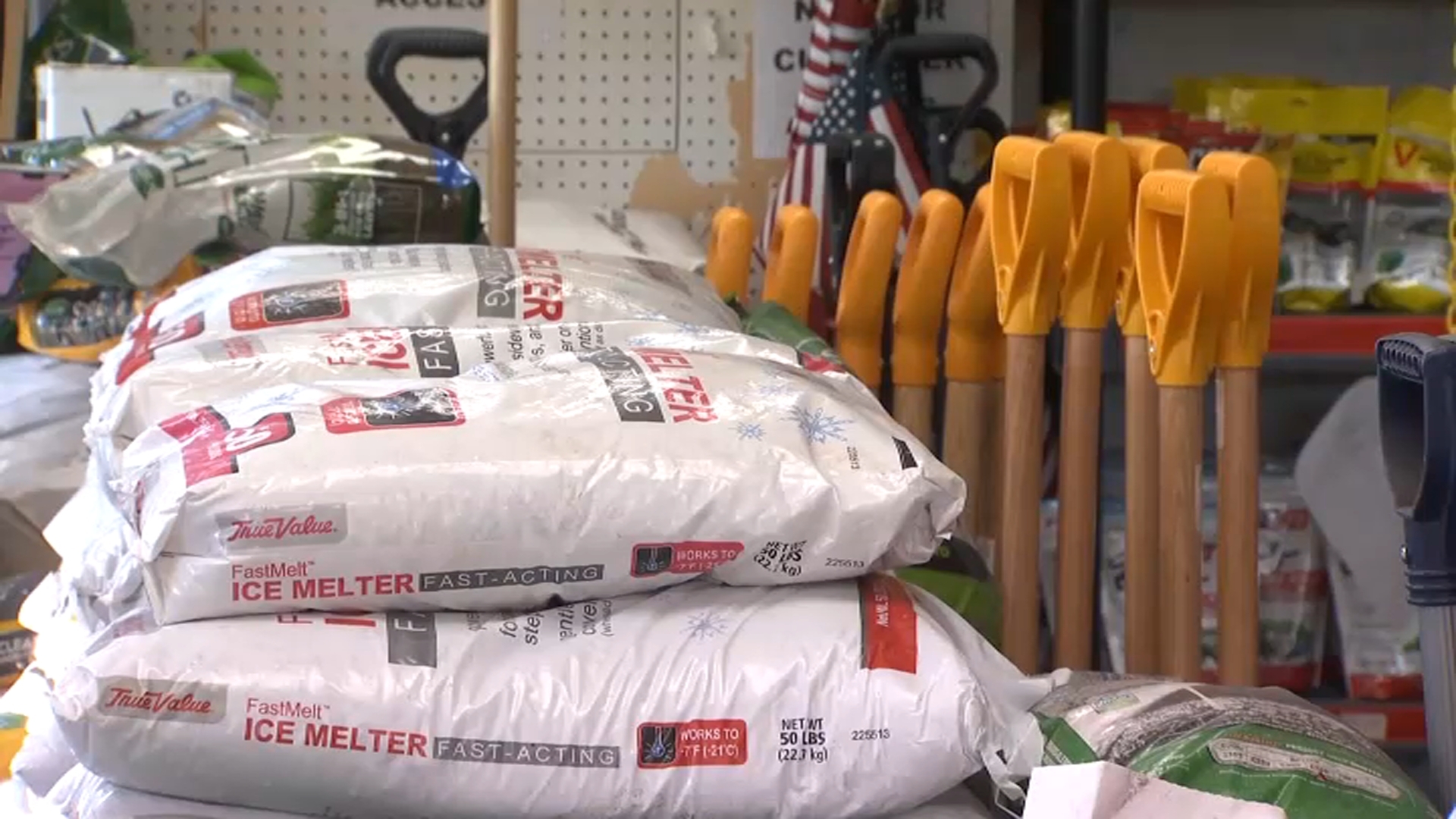 How is New England Preparing for This Weekend's Nor'easter?