All cars must be moved from Boston parking garages by 8 a.m., otherwise they will be charged regular rates

Cleanup continued Monday across New England after this weekend's blizzard.

In Boston, plenty of cars were still buried in snow, but the city's snow emergency has expired.

Boston Mayor Michelle Wu declared the snow emergency Friday ahead of a vicious nor'easter that brought blizzard conditions to Massachusetts, and left more than 100,000 customers without power for a stretch that could last into Monday. Boston saw a record-breaking, single day snowfall total -- a whopping 23.9 inches.

The snow emergency meant anyone parked on a main street would need to move their car to make way for plows and emergency vehicles. Free or discounted parking was offered at city garages, which are listed at boston.gov/snow.

Whipping winds and plenty of snow made for a historic storm on the North Shore of Massachusetts.

All cars must be moved from discounted parking garages by 8 a.m., otherwise they will be charged regular rates.

“I’m going to have to grab some foldable chairs and stick them here," South Boston resident Jake Peelen said. "Hopefully those chairs don’t get taken. We’ll see what happens.”

As predictable as snow in the winter in Boston – space savers are now decorating Southie's side streets like an annual right of passage.

We found everything from diapers and baby walkers to golf clubs and house plants.
Some people are still shoveling out two days after Saturday's record-setting blizzard dropped nearly two feet of snow on the city of Boston.

"I was worried that it was going to be the Snowpocalypse. I actually moved up to Boston during the Snowpocalypse," said Joey Triska of East Boston. "I'm pleasantly surprised that it's only two or three feet or something."

Piles of snow remain on the ground in Boston and across New England.

Heather Schon and her roommate spent an hour-and-a-half Monday afternoon shoveling snow outside their home in South Boston.

"I definitely got my arm workout for the day," said Schon.

They were clearing the snow that covered their car and clearing the space where it was parked. They joined countless others removing snow in the narrow streets of South Boston.

"I've lived in New England for like four years, and I've never seen snow like this," she said.

"There was like 2 feet of snow in front of the car, just to dig out the car," said Bryan Smith.

It took Smith two hours to dig his car out and use all the snow to build a wall around the parking space, a space now saved with things Sara Rizzolo found in their house.

"I have our beach chair and a mop bucket to keep my spot safe for the day," said Rizzolo.

Plow driver Paul Antonino says after spending 19 hours plowing, shoveling and snow blowing over the past three days, it's a little frustrating when people clear their snow onto his freshly cleaned streets or sidewalks.

"I came and caught her throwing all the snow on my sidewalks, so I went crazy, I was yelling at her, but just like I yell at my daughters, I end up making up right away, so that's what ended up happening," Antonino said.

Others haven't even tried to dig out – with their cars so buried in snow, it seems like they'll be covered until spring.

Jenny Burns and Matt Coolidge gave up on shoveling and just tried to power through what was left of the snow piles in their driveway.

"I knew that we could get in there leaving that little bit, I mean, I'm not shoveling it," Matt Coolidge said.

Space savers, which were allowed throughout the city except for in the South End, must be removed by 6 a.m. Wednesday, 48 hours from when the snow emergency expired.

Initially, Wu said people would have 24 hours to move the space savers after the snow stopped falling, but she granted an extension. Boston residents said the two extra days will come in handy.

The space saver system is not popular with everyone.

"I understand how it's reasonable to save your spot for a couple of hours if you need to leave, but I think after 24 hours, it becomes useless and it makes parking even harder I think in South Boston," argued Keyan Golestaneh.

But those who play by the rules hope they're not crossed.

"Maybe leaving a sassy note, or maybe taking the air out of their tires or something," said Smith. "Although that's counterintuitive because they couldn't go anywhere. But we would be pretty mad, I guess."

It took Schon standing in people's shoes to know not to take over their saved space.

"I always made fun of it, but honestly, after [shoveling] for an hour-and-a-half, I see. I totally don't blame them," she admitted.

School districts in some cities and towns had to decide whether to open Monday after this weekend's heavy snowfall.

School or no school?

The weekend blizzard had many school districts struggling to decide whether or not to close or be open for classes on Monday. In Chelsea, the superintendent said she waited until late Sunday afternoon to make the call. After seeing some of the streets were still snow covered and a lot of the sidewalks were slippery, she chose to have a snow day.

"At the end of the day, it boils down to safety at the sidewalks and at the bus stops. We have mountains of snow so we decided to give everyone an extra day to dig out and be safe," Chelsea Superintendent Dr. Almi Abeyta said.

In Boston, some parents criticized the decision by the district to be open on Monday. The Perry School put out a call for shoveling help on social media just a half hour before students arrived. Custodians at New Mission High School were still clearing snow at lunchtime.

"It's brutal. I was honestly surprised when they said school was open," custodian Leonard Upshaw said.

Ryan Ward was supposed to be in school in Boston Monday, but her school bus never showed up to her snow-packed street. With her mom’s car still buried in snow, she hopes to make it on Tuesday.

"I just thought it was a bad decision. It's unfair to the students. It's unfair to the parents. I think they don't want to add a lot of days to the end of the school year, but at the risk of safety, you have to err on the side of caution," said her mom, Shamieh Wall. 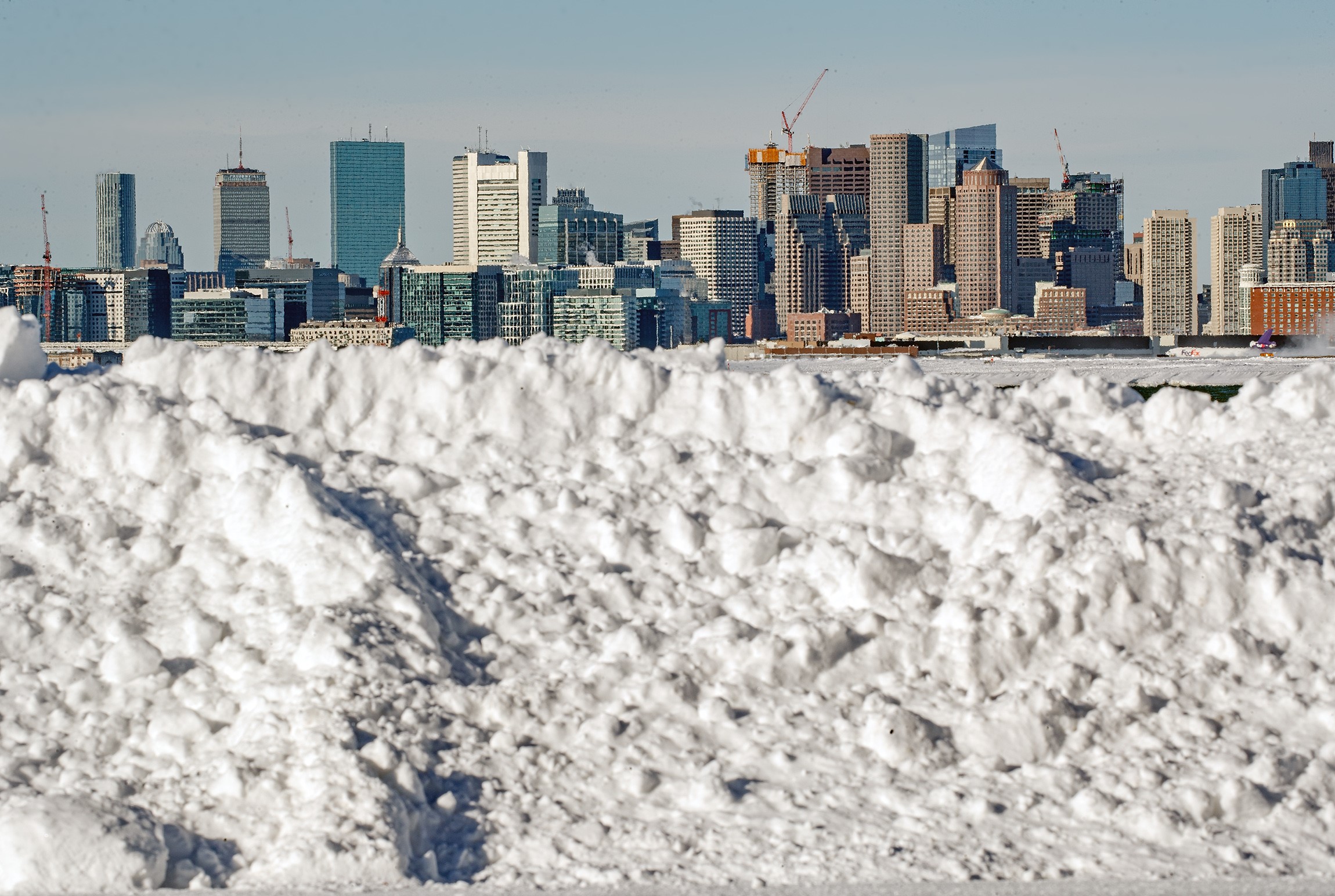 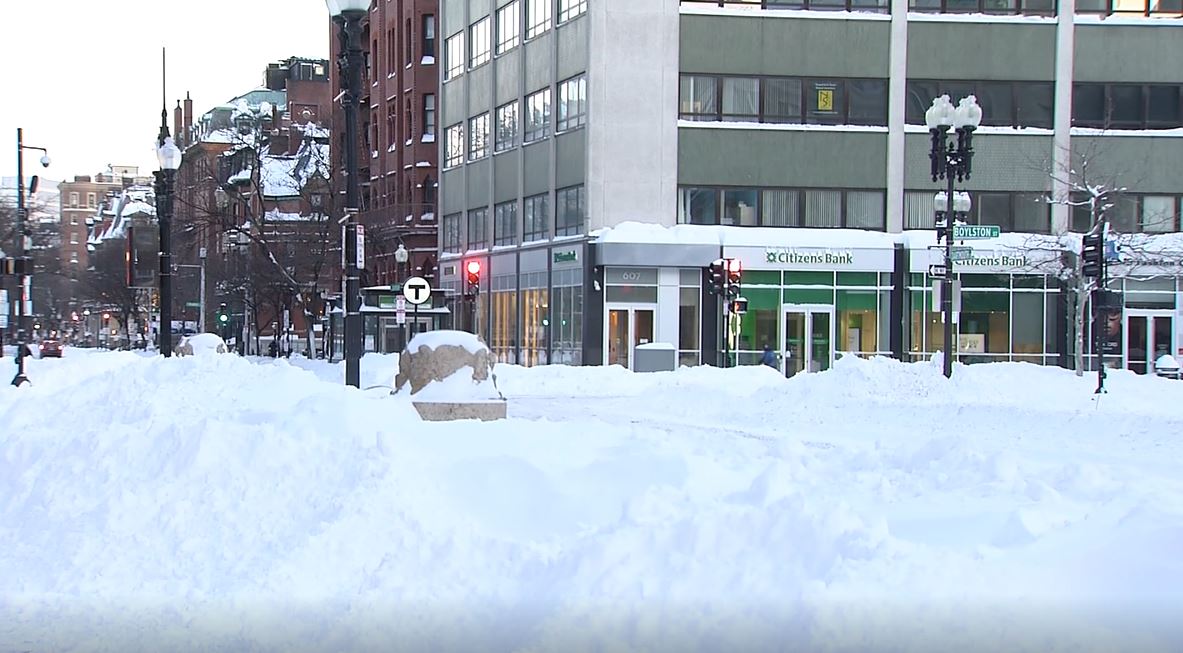