Service cuts are coming to Saint Vincent Hospital in Worcester, Massachusetts, nearly five months after its nurses went on strike.

"We've reached a breaking point," said Saint Vincent Hospital CEO Carolyn Jackson. "It's unsustainable to continue all the services that we've been continuing, so we've had to make some really difficult decisions."

Jackson says the hospital is scaling back some procedures, while temporarily closing outpatient services like cardiac rehab.

"Probably the biggest thing that people will notice is our reduction in in-patient beds," said Jackson, "and what that means is less room for people who need admission, predominantly from the emergency department, so you can expect longer wait times and perhaps more transfers out."

"It's just sad that our patients are the ones suffering," said same-day surgery nurse Lil Lapense, who's worked at the hospital for more than 42 years.

"It's heartbreaking, we love our patients so much," RN Karen John said emotionally.

Nurses who've been walking this picket line for more than 140 days say they knew the hospital would have a hard time sustaining operations with replacement nurses.

More on the nurse strike at Saint Vincent Hospital 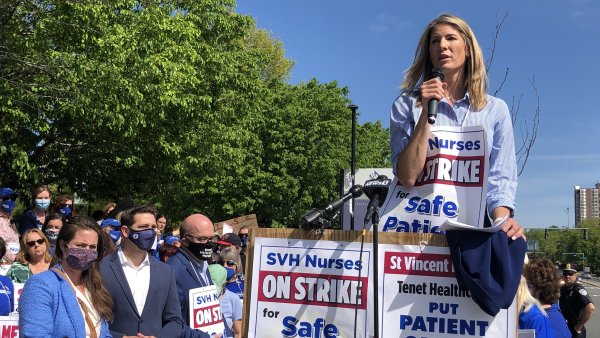 "If they would have just given us one extra nurse per shift, that's all we're asking for," said Tonya Pohl, who's been a nurse at Saint Vincent for 22 years. "This could have been done months ago."

But Jackson says there are other factors impacting staffing levels now.

"The rise of the [delta] COVID variant across the country is part of the challenge because travel nurses are being pulled to other parts of the country," Jackson said.

The hospital is blaming the striking nurses for having to make these cuts, while the nurses are blaming the hospital for not coming to terms on increased staffing levels. But both sides agree the patients are the ones who will be affected.

The nurses' bargaining unit and the hospital have in-person negotiations scheduled again for Monday.