An intense storm hit Boston and parts of New England Wednesday afternoon, prompting widespread severe thunderstorms and the grounding of planes at Boston Logan Airport for over an hour.

Among heavy rain and strong winds, a ground stop was issued to halt flights into and out of Boston Logan Airport, according to the National Weather Service. It observed a microburst over the airfield, with a wind gust of nearly 60 knots.

As severe storms passed through New England, hail and heavy wind knocked down potted plants on a deck in Newmarket, New Hampshire. 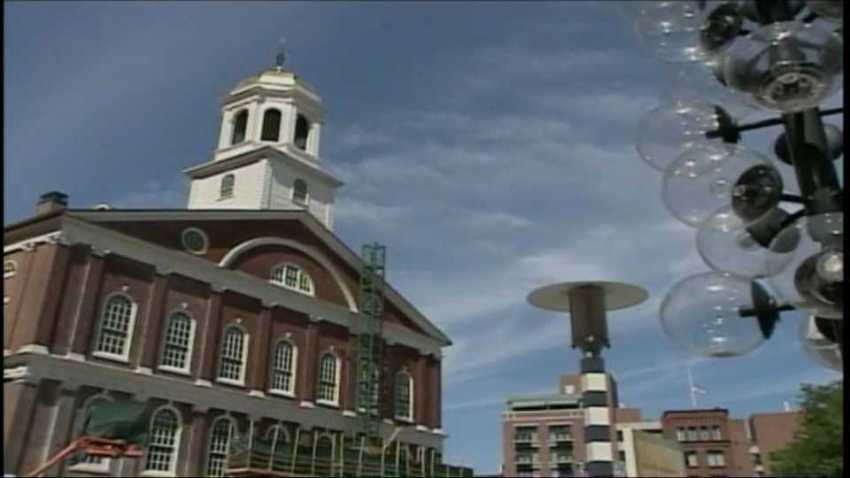 The ground stop was being lifted after about 90 minutes, with safety officials checking the runway for debris. Microbursts are localized and potentially dangerous areas of intense, straight-line winds that come out of a storm.

"I was here for work. I was sitting on my plane for an hour, and then the storm came and we had to wait on the plane, at the gate," said Melissa Burke of San Diego. "The airport shut down, so we all just got off, deplaned, and they rebooked my ticket, actually."

"I'd much rather be safe and sound in the airport than roll the dice," added passenger Lauren Reyes. "I'm glad they're taking the right precautions to make sure we get home safe."

A massive tree fell on cars in the Fields Corner neighborhood of Dorchester in Boston, and neighbors said they thought it was taken down by lightning. It left Jeremy Gomes startled — the tree came down on his car while he was inside.

"The tree came down and I come out of the car and I see a spinning in the air," Gomes said, describing the thunder as "so impactful."

In Gloucester, crews were in the water cleaning up after the stormy weather flipped more than a dozen sailboats.

The Gloucester house where David Newsom and his family, visiting from California, were staying was badly damaged when a tree pierced through the wall, ending up in a closet.

"It felt like everything exploded, like a train blew through the house," Newsom said. "I went out on the deck to move the umbrella, to close it down before it blew away, and it blew up out of my hands and then the whole tree came down on me."

There were significant delays Wednesday evening on the Newburyport/Rockport Line of the MBTA Commuter Rail due to signal and crossing gate issues caused by lightning strikes.

The storm was carried in by a cold front that continues to slowly work through New England will gradually bring some relief from the heat.

Boston reached 90 degrees for the fourth straight day on Wednesday, but the downpours and storms cooled things down before fizzling at night.

Overnight lows were expected to be in the 60s to around 70.

The front will continue its gradual move south on Thursday, so while we wake up with sunshine and lower humidity in the mountains, expect some clouds, showers, and humidity in southern New England through midday.

During the afternoon, those leftover downpours will move out and humidity will drop across New England. Highs will be in the 80s.

Friday brings lots of sunshine and comfortable air to New England, with highs in the 80s inland and in the 70s to around 80 at the coast thanks to a seabreeze.

The weekend looks mainly dry for now, with a good deal of sunshine and highs in the 80s. There’s just a slight risk of an isolated downpour or storm.

Next week, at this point, looks more seasonable, with temperatures in the 80s and a storm threat primarily focused on Tuesday and Wednesday.