Wu doesn't have much time to revel in her historic win -- she will be sworn in on Nov. 16

"Not particularly," she told a reporter with a laugh.

But Wu, who is the first woman, Asian American or person of color elected to serve as mayor of Boston, was getting to work on Wednesday, attending a City Council meeting and getting together with outgoing Mayor Kim Janey at City Hall to start going over the transition of power.

Wu doesn't have much time to revel in her historic win -- she will be sworn in on Nov. 16. Janey, who endorsed Wu after missing the cutoff to progress from the primary election in September, has committed to a smooth transition of power.

Speaking Wednesday morning, newly elected Mayor Michelle Wu said she is "honored and humbled" to have the trust of residents across Boston, and she is ready to get started.

Wu said Wednesday morning that she is "so honored and humbled to have the trust of residents across the city and the partnership of so many. Ready to get started."

She collected 28 percentage points more votes than her opponent, fellow Boston City Councilor Annissa Essaibi George, in the election, which was a key milestone in the city’s long political history. Boston had only elected white men as mayor before her.

“One of my sons asked me the other night if boys can be elected mayor of Boston,” Wu told supporters Tuesday night. “They have been, and they will again someday, but not tonight.”

For the first time ever, a woman has been elected mayor of Boston, with Michelle Wu now getting ready to take office.

Wu had racked up a series of high-profile endorsements, including support from acting Mayor Kim Janey, U.S. Sens. Elizabeth Warren and Edward Markey, and U.S. Rep. Ayanna Pressley, a former Boston city councilor and member of the “Squad” in Congress.

The city’s previous elected mayor — Democrat Marty Walsh — stepped down earlier this year to become U.S. Secretary of Labor under President Joe Biden. Walsh was replaced on an acting basis by Janey, sworn in March 24 as Boston’s first female and first Black mayor.

Janey told reporters Wednesday in a joint appearance with Wu that her main advice for the incoming mayor is, "Through all of the difficulty, it is so important to make space for joy. And so, I hope that you do love and enjoy the work as much as I do -- I'm sure you will -- but that you also make space for joy."

With her victory in hand, it’s now up to Wu to try to make good on some of her sweeping proposals, though she does so with a mandate from voters, and in her election night speech, Wu pitched her agenda as a shared one.

"The mandate from yesterday's results is to take on the big challenges facing our city and to do so in a way that truly brings everybody into the conversation," she said.

Wu has only 14 days to put together her team, connect with key department heads and get briefed on any crises de jour. She said she will work closely with Janey's team in the coming days to ensure she can hit the ground running.

Michelle Wu thanked Boston voters for making her the first woman to be elected as the city's mayor.

Her "top priority is building out our team," one that will "reflect the city of Boston," Wu said Wednesday.

Before the election, NBC10 Boston asked both candidates, what will you do on your first day in office? Both first spoke about tackling the Mass. and Cass housing and addiction crisis.

"One of my first hires will be a Mass. and Cass cabinet level chief reporting directly to me so we have a point of accountability and coordination," Wu said.

Secondly, Wu said she wants to prioritize COVID recovery, its effect on the schools and expected new funding from the federal government.

"The decisions have to be made, not as Band-Aids on situations but to really get at root causes and build out the systemic change that we need to seem," Wu said.

Jacquetta Van Zandt, a political activist, explains why Michelle Wu’s victory marks a turning point for the city of Boston, which only elected white men as mayor before her.

Two of Wu’s most ambitious pledges focus on housing and public transportation, familiar themes for the city’s 675,000 residents.

To help push back against soaring housing costs that have forced some former residents out of the city, Wu has promised to pursue rent stabilization or rent control. The biggest hurdle to that proposal is the fact that Massachusetts voters narrowly approved a 1994 ballot question banning rent control statewide.

Another of Wu’s top campaign promises is to create a “fare free” public transit system. Wu has said the proposal would strengthen the city’s economy, address climate change and help those who take the bus or subway to school or work.

Like the rent control pledge, Wu can’t as mayor unilaterally do away with fares on the public transit system, which is under the control of the Massachusetts Bay Transportation Authority.

Wu said she would try to work with partners in state government to make each proposal a reality.

“We don’t have to choose between generational change and keeping the streetlights on, between tackling big problems with bold solutions and filling our potholes,” she said.

Other challenges that Wu will have to grapple with as mayor include public education, policing, the city’s ongoing struggle with the COVID-19 pandemic, and the long-term effects of climate change on the coastal metropolis.

NBC10 Boston's Alison King sat down for a 1-on-1 interview with Michelle Wu, who is in the race to be Boston's next mayor.

Wu, 36, was the first Asian American woman to serve on the Boston City Council, having first been elected in 2013 at the age of 28. She became the first woman of color to serve as council president when she was elected in January 2016.

Her parents immigrated to the United States from Taiwan in the early 80s, before she was born. She is fluent in Mandarin and Spanish.

Wu graduated from Harvard University and Harvard Law School. It was while she was a student at Harvard, as her parents were separating, that Wu noticed her mother showing signs of mental illness. Shortly after graduating, just months into her new job, Wu was called home to Chicago by her younger sister, with their mom in a full-blown mental health crisis.

After stabilizing her home life, Wu moved the entire family back to Boston, where she began to attend Harvard Law School. Wu believes the move saved her mother's life. Her mom was diagnosed with late onset schizophrenia and was inpatient at Massachusetts General Hospital.

Wu got her start in City Hall working for Mayor Thomas M. Menino as a Rappaport Fellow in Law and Public Policy. She later served as statewide constituency director in the U.S. Senate campaign of her former law professor, Elizabeth Warren.

Wu lives in Roslindale with her husband, Conor, and her sons, Blaise and Cass. Wu and her family share a two-family house with her mother.

"We put the kids to bed last night and they were happy, they were thrilled, but they just wanted to know if they really had to go to school tomorrow," Wu said Wednesday, adding, "the answer was yes." Michelle Wu to Be Next Boston Mayor, Making History as Essaibi George Concedes 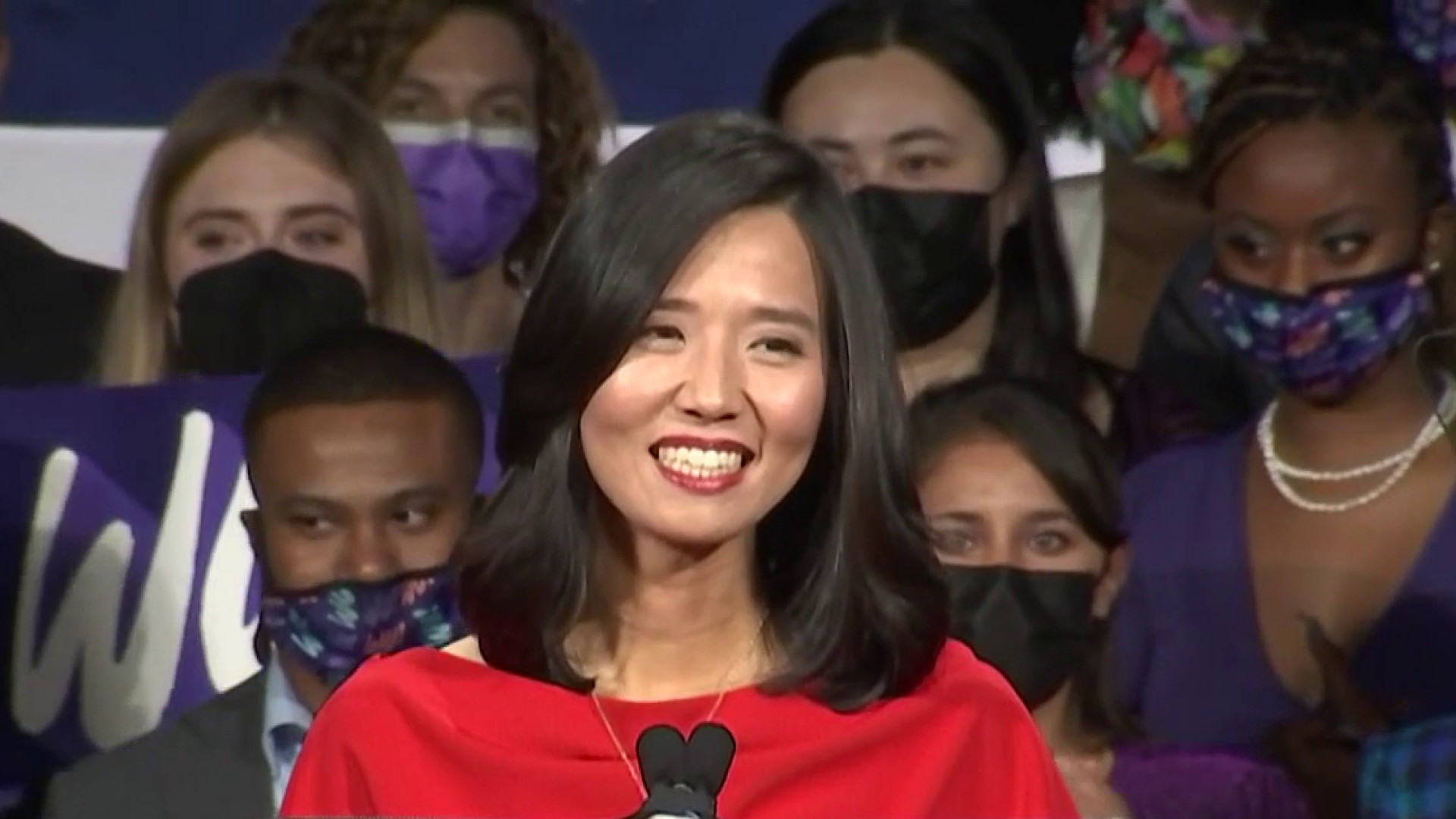