Cases are rising in Massachusetts, in schools, and most counties in the state are now in the CDC's high risk category

COVID-19 cases are surging once again in Massachusetts, with statewide and school numbers seeing large increases in recent days. And most counties in the state are now in the high risk category, the CDC says.

This latest increase is being attributed to subvariants of omicron -- the "stealth" omicron variant BA.2, and the BA.2. 12.1 subvariant, which health officials say appears to be up to 27% more contagious than BA.2. However, there is no data to indicate it causes more serious illness.

The subvariant now accounts for 40% of all virus circulating in New England, according to new Centers for Disease Control and Prevention data released Tuesday.

That largely mirrors what's been seen in New York of late, where a surge in BA.2. 12.1 cases has led to what they're calling the fifth wave of the coronavirus pandemic. So are things going to get worse here before they get better?

Here's what we know:

Massachusetts health officials reported 5,576 new COVID-19 cases and 16 new deaths on Thursday. The last time there were over 5,000 new cases reported in a single day was at the end of January.

The state reported 728 people hospitalized for COVID-19 Thursday, with 230 of them being primary cases. Of the total hospitalizations, 66 are in intensive care and 27 are intubated.

Massachusetts' COVID metrics, tracked on the Department of Public Health's interactive coronavirus dashboard, have declined since the omicron surge, but case counts have been on an upward trajectory in recent weeks. For context, this is nowhere near the numbers seen at the height of the omicron surge in January, when average daily case counts reached over 28,000 and hospitalizations peaked at around 3,300.

COVID levels in wastewater, as reported by the Massachusetts Water Resources Authority's tracking system are also increasing. It's important to note that the levels of virus seen in the wastewater remain nowhere near where they were during the peak of the omicron surge.

The number of new COVID-19 cases in Massachusetts schools shot up significantly over the past week, with 17,423 students and staff members testing positive in the last week.

The state Department of Elementary and Secondary Education released the numbers Thursday in its weekly COVID-19 report, which covers May 5-11. During that time period, 13,380 students and 4,043 school workers tested positive for coronavirus. Those cases make up 1.45% of the student body and 2.89% of employees.

The total cases represented an increase of 62.6% from last week's report, when 10,715 cases were confirmed in schools, including 8,079 students and 2,636 staff members.

New COVID cases had been on the rise through the holiday season and the omicron surge, but began to decrease after Jan. 13, when 48,414 were reported. From around the start of March, though, cases have been ticking back up.

Most of Massachusetts now at high risk

All but three of Massachusetts' 14 counties are now considered high risk for community levels of COVID-19, according to the latest data from the Centers for Disease Control and Prevention.

The latest data released Thursday shows that Barnstable, Berkshire, Dukes, Essex, Franklin, Middlesex, Nantucket, Norfolk, Plymouth, Suffolk, and Worcester counties are all listed as high risk. Bristol, Hampden and Hampshire counties are medium risk, with no counties in the low risk category. Just one week ago, only seven Massachusetts counties were listed as high risk.

In New Hampshire, the entire state is now considered either high or medium risk. Grafton, Rockingham and Sullivan counties are designated as high risk, while the rest of the state is medium risk.

Four Maine counties -- Aroostook, Hancock, Penobscot and Piscatiquis -- are considered high risk, with the remainder of the state in the medium risk category.

In Connecticut, Hartford, Litchfield, Middlesex, New Haven, Tolland and Windham counties are all high risk, with Fairfield and New London in the medium risk category.

All of Rhode Island remains in the medium risk category for the second straight week.

Residents in counties with a high risk levels are urged to wear masks indoors in public and on public transportation, to stay up to date with vaccines and to get tested if they have symptoms, according to the CDC.

Residents in areas with a medium risk levels are encouraged to wear a mask if they have symptoms, a positive test or exposure to someone with COVID-19. Anyone at high risk for severe illness should also consider wearing a mask indoors in public and taking additional precautions, the CDC says.

Will Massachusetts bring back a mask mandate?

Despite the rising cases here, Massachusetts and the other New England states have yet to take any steps to bring back mask mandates or any other COVID-related restrictions that were relaxed following January's omicron-fueled surge.

But some schools in areas where transmission is high have already made the decision to recommend that students and staff start wearing masks again. The Department of Elementary and Secondary Education dropped their mandate earlier this year.

The return of masking in schools is not nearly as widespread as earlier in the pandemic, particularly as the public’s worries over the virus have ebbed. But districts in Maine have brought masks back, with a few in Massachusetts also recommending them even as the school year enters its final weeks.

Maine’s largest school district, in Portland, said this week masks would return, with Superintendent Xavier Botana saying that was the “safest course at this time” amid rising cases. Bangor, Maine, schools also brought back a universal mask requirement.

In parts of Massachusetts that have seen high levels of COVID-19 transmission, authorities are also recommending masks in schools. Arlington, Belmont and Cambridge are among the schools now urging students and staff to wear face coverings.

Diana Martinez and Owen Cornwall, who have a first grader at Graham and Parks School in Cambridge, have been following the recommendation to mask their daughter.

“We’re very happy about it. It gives us a little peace of mind,” said Martinez, 42, a professor at Tufts University. “I think the parents generally trend toward wearing them and that gives us some comfort. It’s the same case at our pre-school. There will be a couple of parents who don’t mask their child, but we will be masking our child.”

Cornwall said there seems to be a general consensus in the school community in favor of playing it safe.

“We’re sort of lucky in this neighborhood, that they share our concerns with health,” said Cornwall, 37, a visiting scholar at Tufts.

Half of the state's 14 counties are now considered a high risk for community transmission of COVID-19.

What are the experts saying?

We asked our panel of experts for their thoughts on the recent surge in cases and what they think is next during this week's "COVID Q&A" discussion.

"Right now, we are seeing some increases in hospitalization," Dr. Shira Doron of Tufts Medical Center said. "It can be very difficult to tease out how much of that is inevitable increase that you will see in hospitalization numbers when cases go up."

"It is a time to be vigilant," she said. "It is a time to use all the tools that we have available and to make those tools more accessible. I know that people are tired at this point -- it's been two years. I'm also tired, but my message is it's not too late to get vaccinated, especially the people who are who have not yet been vaccinated. Also, we know that boosting works and it is helpful. It's not an extra dose. It's actually an important dose that would provide a high level protection."

Assoumou said this is also a time where we should be using testing and masking up in indoor public settings.

"I know that people probably don't want to hear this because they're tired, but if you use the most recent CDC markers with the community levels, a lot of the counties in Massachusetts are high enough that they meet that indication," she said. "So anyway, my message is we're back here again, unfortunately. "It's been a long time, but we have more tools. So let's make sure that we use those tools and be more vigilant."

Dr. Daniel Kuritzkes of Brigham and Women's Hospital said he agrees with Assoumou that for many people, it's going to be important to review and reinstitute some of the safeguards that were relaxed when cases dipped, particularly masking on crowded places like public transportation.

"I think what's unclear is what is driving the current surge," he said. "Is it because we have a new more infectious variant or subvariant of omicron or is it that we never got to where we needed to be? And is it the relaxation of all these safeguards and letting down our guard that has contributed to the spread as a new subvariant takes hold in the community?"

Still, Kuritzkes said there are some encouraging signs. So far, this most recent subvariant is similar to the original omicron variant in that it is less likely to cause severe disease, meaning fewer people are being hospitalized due to COVID than during previous surges. 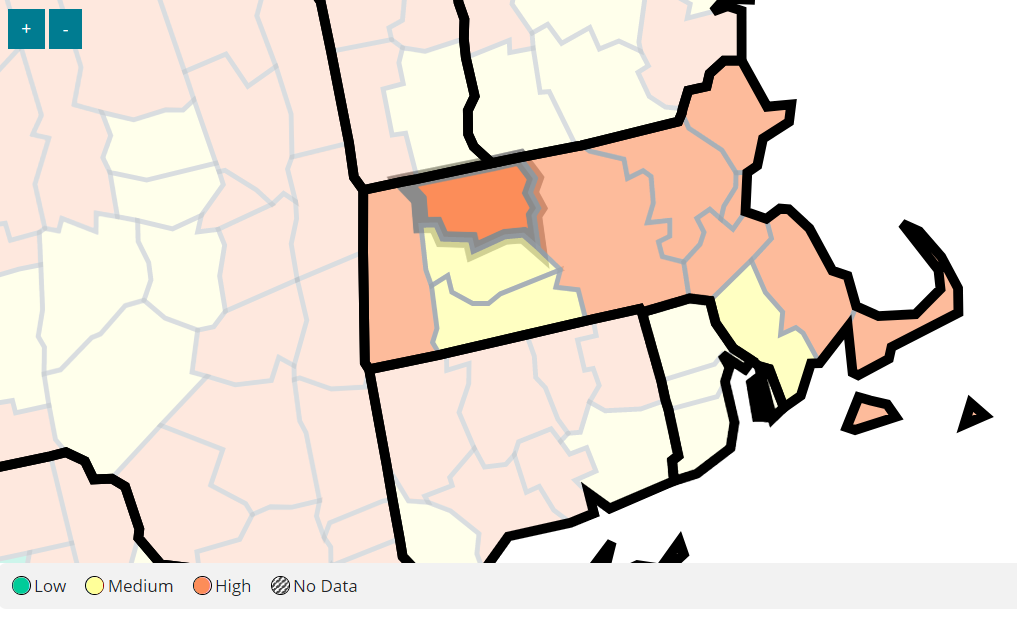 Most of Mass. Now at High COVID Risk, CDC Says

New COVID Cases in Mass. Schools Have Risen by 62.6% in Last Week