There isn't much time left in the race -- just two weeks left to make for Annissa Essaibi George and Michelle Wu to make their cases to voters before the Boston mayoral election on Nov. 2

Annissa Essaibi George and Michelle Wu went head-to-head Tuesday night in the most heated debate the Boston mayoral race has seen so far.

The two City Council colleagues have been cordial throughout much of the race, agreeing on Boston's shortfalls and touting their own accomplishments. But Tuesday's hourlong debate struck a combative tone not yet seen and highlighted some important policy differences on issues like free transit, rent control and police reform.

After fireworks flew in Tuesday's debate between Michelle Wu and Annissa Essaibi George, both candidates are trying to cement support in the final days before Boston's mayoral election.

The fiery exchange started early on when Essaibi George took a shot at Wu in what she characterized as “inconsistent” messaging on access to the city’s three exam schools.

“Talk to me please about why you are delivering a different message depending on which community you’re in," Essaibi George said.

"That’s simply not true, Annissa," Wu responded. "This is a big distinction between us. I support having equity in every part of our system and I think it’s right we are adding reforms to this process.”

That set the stage for much of the debate, hosted by NBC10 Boston, Telemundo Boston and NECN, in partnership with the Dorchester Reporter and the Bay State Banner, at the NBCUniversal Boston Media Center.

There isn't much time left in the race -- less than two weeks for the candidates to make their cases to voters before the Nov. 2 mayoral election -- and recent polls show Wu with a large lead.

The most recent poll, conducted by Suffolk University for NBC10 Boston and The Boston Globe, had Wu at 62%, more than double the 30% support for Essaibi George, with 7% of respondents still undecided. A MassINC/WBUR poll released last week also had Wu leading by 32%.

The two candidates both represent the city and have worked together, and the day after they progressed from the preliminary round of the election, they embraced at a City Council meeting. But on Tuesday night, they questioned one another's fitness for the city's top position.

“The city of Boston deserves better,” Wu said. “Our country and our democracy barely survived four years of Trump, and the types of campaigning that involve negative attacks, personal attacks, falsehoods, and fear mongering. This is not what I wanted this mayoral race to turn into.”

The candidates even accused each of other of lying, including when they discussed implementing measures like the city adding 19 clinicians to Boston's crisis response protocols.

City Councilors Michelle Wu and Annissa Essaibi George, the final candidates to be mayor of Boston, introduced themselves at Tuesday's debate at the Boston Media Center and discussed where they stand on how students should enter the city's exam schools.

Some of the most heated attacks came as debate moderator Latoyia Edwards asked about potential conflicts of interest.

Essaibi George was asked about a Boston Globe report from July that indicated that her husband was assisted by his wife's city council staff in a dispute with another developer. The article alleged several Housing and Development violations, and that Essaibi George could have recused herself and did not.

Essaibi George said that she had "no involvement in my husband's business and have filed a report with the Ethics Commission to clarify all that transpired."

Then she pivoted and pointed to a Boston Herald report from Tuesday that stated Wu and her husband purchased a Roslindale multifamily home at about half the price of what it sold the year prior from Wu's Harvard Law School roommate.

Wu's college roommate now works for her father, Terry Considine, at a Colorado development firm. Considine is a prominent Republican politician and contributor to GOP causes, the Herald reported, and has donated $2,500 to Wu's campaign.

"The people of Boston, the voters of Boston deserve to know about your relationship with Terry Considine, who has given you our campaign thousands of dollars," Essaibi George said. "A hatemonger, a man who ran for U.S. Senate and said terrible, racist and discriminatory things about people from Mexico. You need to disavow that."

The poll, conducted by Suffolk University for NBC10 Boston and The Boston Globe, has Wu at 62%, more than double the 30% Essaibi George received.

While running for Senate in the 1980s, Considine used a racial slur for immigrants from Latin America, according to The Washington Post. He reportedly later apologized.

Wu said that she and her college roommate purchased the property together, and added that they are the godmothers to each others' children.

"There's absolutely no wrongdoing that happened here," Wu said. "I am willing and able to stand behind every single bit of the success and stability that my family has had because it has taken hard work. And I have been reporting every bit of our financial transactions over the years as a city councilor. And there's simply nothing here and I'm disappointed to see the the tactics that are being used."

When asked if she has any conflicts of interest of her own, Wu said, "My husband and I just own one piece of property. It is a two-family home that we live in."

The candidates have called for outside groups to stay out of the race, but negative campaigning became a factor in the election last weekend.

On Sunday, a PAC comprised mostly of local labor unions released an attack ad about Wu. The same day, about 20 people approached Wu with flyers promising $100 gift cards for participating.

The flyers had been handed out at the city's troubled Mass. and Cass area -- another subject of Tuesday's debate -- according to the Wu campaign, and the candidate herself called it a "despicable" political tactic that manipulates city residents.

Essaibi George called the notion that the flyers could have come from her campaign "absolutely ridiculous" and said it distracts from the work she is doing. 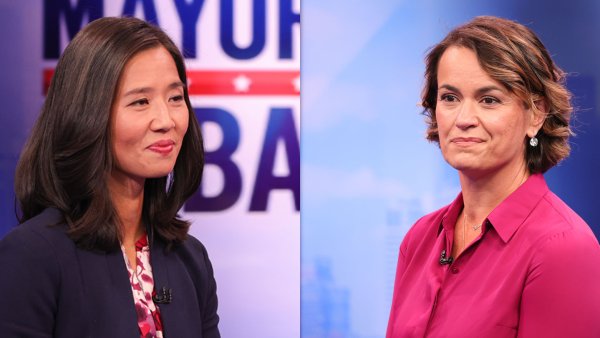