Michelle Wu, the first woman and person of color elected to be mayor of Boston, was sworn in on Tuesday, the latest historic achievement for the former city councilor in her adoptive city.

Wu took the oath of office flanked by her two children and her husband, vowing to "faithfully and impartially discharge and perform all the duties incumbent on me as mayor of the City of Boston."

Afterward, Wu spoke about the full-circle moment it was for her personally, having entered city government in Boston under the administration of Mayor Tom Menino. And she reiterated her campaign pledge -- an answer to critics of her progressive agenda -- that her administration will tackle major change while at the same keeping the city functioning.

"Not only is it possible for Boston to deliver basic city services and generational change, it is absolutely necessary in this moment. We'll tackle the biggest challenges by getting the small things right," she said.

Boston Mayor Michelle Wu spoke about her past in politics and her plans for her new administration after taking the oath of office.

Wu entered the City Council chamber with outgoing Mayor Kim Janey, and the chamber erupted in applause when Matt O'Malley, the council's president, mentioned at the start of the ceremony the history being made on Tuesday. In attendance were some of Massachusetts' top politicians, including Sens. Elizabeth Warren and Ed Markey and Rep. Ayanna Pressley.

"I feel good knowing that you share my love and my passion for Boston. I'm confident that you will lead our city with integrity and that you will center equity in all that you do. I know that Boston is in good hands, and I am so proud to call you 'madam mayor,'" Janey said ahead of the swearing-in.

The achievement felt completely out of reach to Wu when she first stepped foot in City Hall over a decade ago, she said.

"The first time I set food in Boston City Hall, I felt invisible, swallowed up by the maze of echoing concrete hallways," Wu said.

Judge Myong Joun administered the oath of office to Michelle Wu on Tuesday, beginning the term of the first woman and person of color elected to the position.

But she went on to become the city's first Asian city councilor and the first to nurse a child during a council meeting.

"Michelle has already accomplished things that people said were not possible," said Warren, Wu's one-time Harvard Law School teacher, in an interview after the swearing-in.

The senator said Wu has the heart and the determination to succeed, while Pressley said Wu has the mandate, after a nearly 30-point win in the election, "to ensure we have an equitable recovery but that we are charting a more just path forward."

There will be another ceremony marking Wu's ascendancy to leading Boston -- her inauguration in January.

Wu won Boston's mayoral election just two weeks ago with 60% of the vote. The special election to replace former Mayor Marty Walsh, who left for a presidential cabinet position, meant that Wu had far less time to make the transition than past mayors.

The first woman and person of color to be elected mayor of Boston, Michelle Wu took the oath of office in the City Council chambers on Tuesday.

Before Wu, Boston had only elected white men to the top political job. Wu's business cards are already in with her title listed in several different languages, a nod to her platform of making Boston more inclusive.

The swearing-in means Wu will now face the daunting task of trying to make good on a series of sweeping policy proposals that were the backbone of her campaign. To help push back against soaring housing costs that have forced some former residents out of the city, Wu has promised to pursue rent stabilization or rent control.

The biggest hurdle to that proposal is the fact that Massachusetts voters narrowly approved a 1994 ballot question banning rent control statewide. Another of Wu's top campaign promises is to create a "fare free'' public transit system.

Wu has said the proposal would strengthen the city's economy, address climate change and help those who take the bus or subway to school or work. Like the rent control pledge, Wu can't unilaterally do away with fares on the public transit system.

Michelle Wu will be officially sworn in as Boston's mayor in a historic ceremony Tuesday as the first woman and person of color elected to the position.

Wu has said she would try to work with partners in state government to make each proposal a reality.

A recent survey of zip codes across the country found 02119 -- Back Bay -- the second-most-expensive in the country. Only Silicon Valley in California tops it.

And the high cost of housing keeps many on the edge of homelessness.

"The first thing I'd do [is] move the money for the rent because I can't be homeless in the cold weather like this. Michelle out to know that," said Mireille Ancion, of Roxbury.

Other issues that residents mentioned including the coronavirus pandemic and education.

The 36-year-old Wu, whose parents immigrated to the U.S. from Taiwan, grew up in Chicago and moved to Boston to attend Harvard University and Harvard Law School.

Tuesday also marks the end of Janey's tenure as mayor. She stepped into the role eight months ago after Walsh left to be U.S. Secretary of Labor, becoming the first woman or person of color to serve as mayor in an acting capacity.

"I am proud to pass the baton to Michelle Wu and thrilled to call her Madam Mayor. I know that she will work with all of you to build that even better Boston. And, I know that she will value all of the energy and creativity that you bring to our city, just as I did," Janey said in a farewell message to the city. 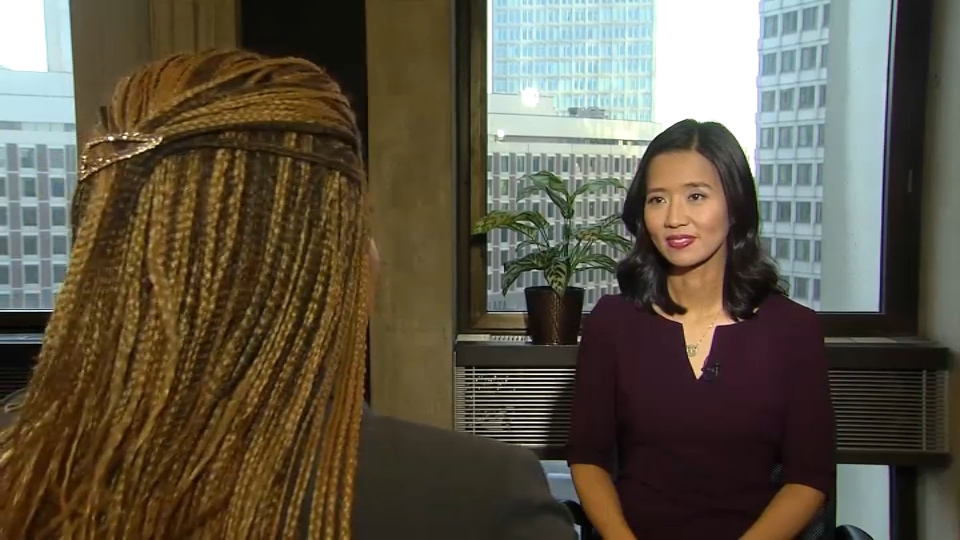 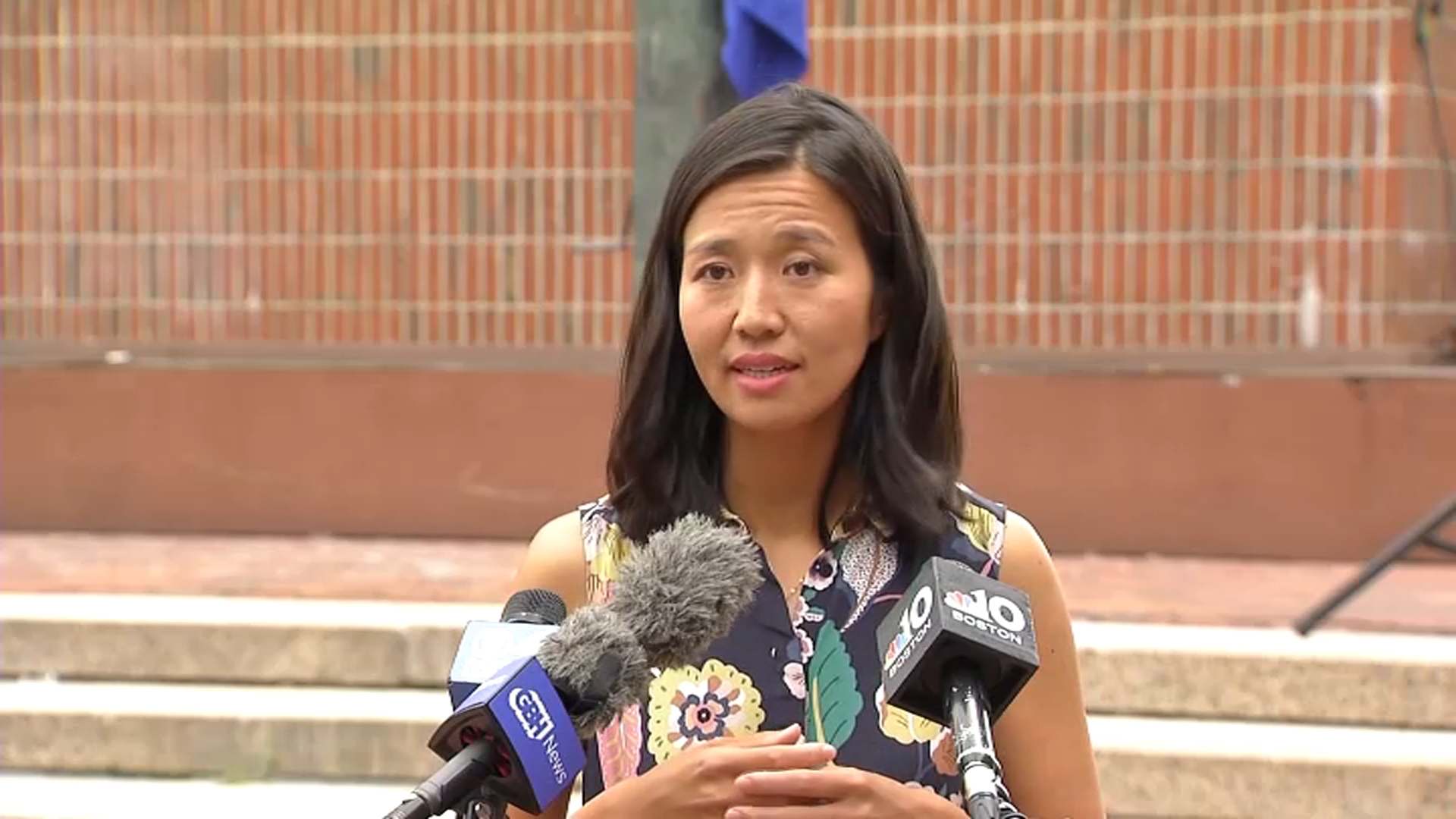