Race on to Clear Heavy Snow Ahead of Flash-Freeze in Mass.

"I hope we don't set a record this year, but 2020 is one of those years I suppose we could," Boston Mayor Marty Walsh said

Crews worked in whiteout conditions Thursday in a race to clear Massachusetts' roads as temperatures plummeted, threatening a flash-freeze.

"We're starting to catch up now, but this has been a tough storm. We're really concerned right now about this flash-freeze," Massachusetts State Highway Administrator Jonathan Gulliver told NBC10 Boston. "The temperatures are dropping rapidly."

The season's first major storm, officially a nor'easter, is expected to cover the state in 12 to 18 inches of snow when all is said and done. But the roads are expected to get worse -- not better -- despite over 3,000 pieces of equipment from the Massachusetts Department of Transportation treating roadways since Wednesday night.

The first Nor'easter of the season dumped more than a foot of snow across parts of New Hampshire on Thursday causing treacherous driving conditions.

Workers will continue clearing and salting the roadways throughout the day in an attempt to patch up pockets of moisture on the ground, Gulliver said, but he warned it likely won't be effective for long. Temperatures in the MetroWest area of Greater Boston dropped from the low- and mid-30s into the upper teens and low 20s Thursday morning.

"Really we're going to continue to advise people, stay in if you can and if you have to be out there, really expect there to be some really tough conditions," Gulliver said.

Boston Mayor Marty Walsh echoed Gulliver's plea for people to stay inside so the streets can be cleaned and the city can open up "in a big way," by Friday.

"This is a lot of snow. This is not a typical kind of snowstorm, this is a bigger, bigger, bigger type of snowstorm," Walsh said in a phone interview. "I'm not sure if they've defined it as a nor'easter yet, but it certainly feels like one."

Thursday: Heavy snow ending during the afternoon and evening. Temperatures fall to the teens. Overnight Thursday: Clearing, icy roads. Lows in the teens. Friday: Fair. Highs near the melting point.

Boston already broke the record for snowfall on Dec. 17, recording 9.1 inches falling since midnight on Wednesday, according to Bryce Williams, a meteorologist at the National Weather Service in Norton, Massachusetts.

“That is the new record right now, and it will probably be more before it’s done,” Williams said.

The previous record for snowfall on Dec. 17 was recorded in 2013 when 6.4 inches fell in Boston.

Boston Public Works employees and transportation workers were out operating about 700 pieces of equipment overnight and into the morning. A parking ban went into effect Wednesday night in Boston and schools are closed Thursday.

Boston Public Works employees and transportation workers were out operating about 700 pieces of equipment overnight and into the morning to remove snow. "This is a lot of snow. This is not a typical kind of snow storm, this is a bigger, bigger, bigger type of snow storm," Boston Mayor Marty Walsh told NBC10 Boston. "I'm not sure if they've defined it as a nor'easter yet, but it certainly feels like one."

While MBTA General Manager Steve Poftak joined the chorus of calls to avoid unnecessary travel, he warned that commuters should allow extra time if necessary.

All MBTA services were up and running, Poftak said Thursday, with the exception of the ferry, which was suspended due to the weather.

There were delays on the red, orange and blue lines Thursday morning, but they have since resumed a regular schedules. The commuter rail is already operating on a reduced schedule due to employees out with coronavirus.

General Manager Steve Poftak said all MBTA services are up and running but urged people to stay home if possible. Poftak said people should allow for extra travel time if commuting is necessary.

High elevations in the Berkshires saw the most snow, more than a foot, in Massachusetts. Moderate to heavy snowfall is forecast through Thursday afternoon, with another 3 to 4 inches accumulating before slowly tapering off.

The pandemic created added complications for countless crews working to clear Massachusetts roads overnight, particularly for the fire department in Attleboro, which has been operating with just about 20 firefighters out of 100 who have tested positive for coronavirus. About a dozen more are under quarantine orders after being exposed to COVID-19, according to Attleboro Fire Chief Scott Lachance.

"The pandemic has obviously been pretty difficult for us. It's had a pretty significant effect on our available staffing levels -- man power -- the numbers fluctuate pretty regularly," Lachance said. "But the firefighters are stepping up, you know, they're working a lot of extra shifts to cover. They're doing everything they can to keep each other safe and stop the spread."

The wind intensified as well Thursday morning, reaching gusts of up to 45 mph through 9 a.m. More than 4,000 people were without power just after 10 a.m., according to the Massachusetts Emergency Management Agency.

"Overall the system is holding up very well," Eversource spokesman Reid Lamberty said. "We will respond to each and every issue that we have in our system but due to the hazards and the conditions it may take us a little bit longer to get there."

Newburyport Fire Chief Chris LeClaire said the city placed about 400 sand bags along the beach in an attempt to prevent erosion from the storm. "We're looking pretty white, we've got a lot of blowing and drifting snow," LeClaire said. Crews will continue to clean up the roads and keep drainage areas open to mitigate the slippery conditions. "Ice is going to be a problem throughout the day so travel will remain treacherous throughout the time until we get some temperatures warming up," Leclaire said.

The force was palpable for officials along the coast like Newburyport Fire Chief Chris LeClaire. The city placed about 400 sand bags along the beach in an attempt to prevent erosion from the storm.

Crews will continue to ensure the roads and drainage systems are clear to mitigate the expected freeze-over, LeClaire added.

"Ice is going to be a problem throughout the day, so travel will remain treacherous throughout that time until we get some temperatures warming up," LeClaire said.

Some towns struggled to keep up with intense snowfall rates that reached four inches per hour at the height of the storm.

"We’ve had less and less contractors interested," said Carys Lustig, Needham's interim DPW director. "We had a few of our long-term contractors leave the business and what we’ve found is when they turn the businesses over, the people they’re turning them over to or they're dissolving the company they aren't as interested in snow because it’s really hard on equipment."

Finding contractors to plow has been a problem for the last few years now, according to Lusting. She attributes the shortage to mild winters in recent years that make the work less lucrative as well as concerns about damaging expensive equipment. The pandemic has only exacerbated the issue, Lusting said.

Lowell Department of Public Works Commissioner Christine Clancy said the city had 125 pieces of equipment on the streets to respond to the storm by 1:30 a.m. Thursday with plans to continue into the afternoon. "We're just trying to keep ahead of the storm," Clancy said.

Lowell deployed 125 pieces of equipment to the streets by 1:30 a.m. Thursday with plans to continue into the afternoon, according to Department of Public Works Commissioner Christine Clancy.

In Melrose, Police Chief Mike Lyle said the plow trucks were doing a "thorough job," in keeping up with the snow. Few other cars were on the road, according to Lyle, which made their work easier.

“Sometimes folks forget we live in New England," Lyle said. "We do get snow and obviously this is the big one so far. Probably this year alone, this is the biggest storm I can see."

Melrose Police Chief Mike Lyle spoke with NBC10 Boston about the city's response to the snow storm. "Sometimes folks forget we live in New England. We do get snow and obviously this is the big one so far. Probably this year alone, this is the biggest storm I can see," Lyle said.

Crews were also responding to storm damage throughout the state, including a wire that came crashing down in Wayland. The city's fire department said repairs were underway after the wire was reported down around 5:30 a.m. It was unclear if a power outage resulted.

Meanwhile, further south, conditions turned to a wintry mix of rain, slush and snow. Officials in Scituate are concerned about the free-over after the community saw some coastal flooding at high tide around noon.

“I’m originally from Maryland and we moved here at the end of winter last year, my husband and I," said Karen Sullivan of the Sand Hills General Store. "He’s originally from here so he’s talked all about these crazy nor'easters. This is my first one, I know we had a lot of snow this morning but we’re hoping to see more than just rain today.”

“It’s not as bad as I thought it was going to be like my way, we have almost twelve inches, but over here isn’t too bad," Reis said. "But the wind - I think the wind is worse than the snow.” 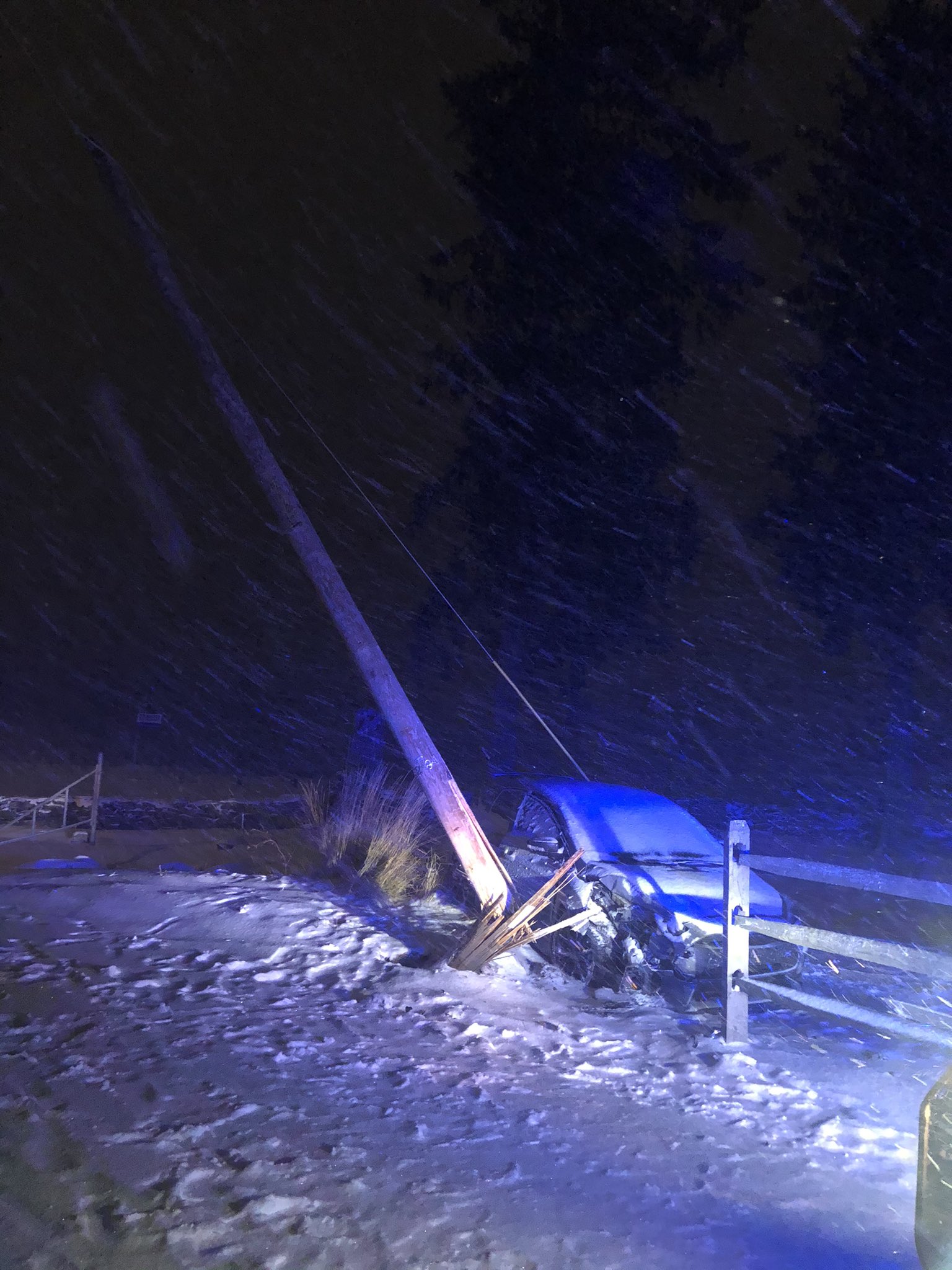 Over 100 Crashes, Disabled Vehicles Reported Across Region Amid Snowstorm 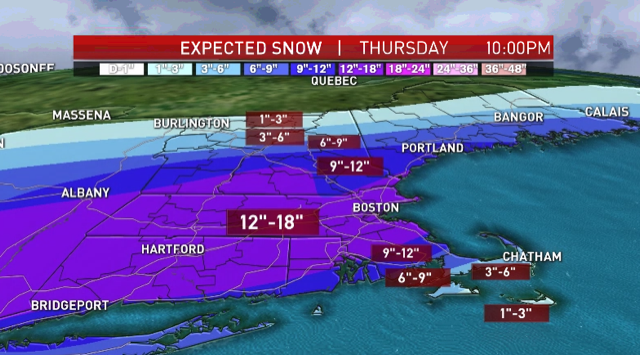 FIRST ALERT: Storm Bringing Over a Foot of Snow to Parts of New England