The bill will go to Gov. Charlie Baker after the House and Senate take one more, largely perfunctory vote

The Massachusetts House and Senate voted Tuesday to approve a compromise bill backers say would increase police accountability — including, for the first time, creating an independent, civilian-led commission to standardize the certification, training and decertification of police officers.

The bill would also ban the use of chokeholds, limit the use of deadly force, and create a duty to intervene for police officers when witnessing another officer using force beyond what is necessary or reasonable under the circumstances.

The legislation would also take steps to break the school-to-prison pipeline and create what lawmakers described as a first-in-the-nation statewide moratorium on biometric surveillance systems, which include facial recognition technology.

The House voted 92-67 to approve the final bill. The Senate approved the bill on a 28-12 vote. Both chambers must take a final largely perfunctory vote before sending the bill to Republican Gov. Charlie Baker.

The legislation is the product of months of closed-door negotiations meant to hammer out a compromise bill between separate bills approved by the House and Senate earlier this year.

Senate President Karen Spilka and House Speaker Robert DeLeo said in a joint statement that the bill represents "one of the most comprehensive approaches to police reform and racial justice in the United States since the tragic murder of George Floyd."

"Our approach strikes a balance that will provide greater protections for the rights of all residents through a strong police officer certification process via a new, independent agency, and setting clear standards for training and use of force, while providing a wider range of tools for law enforcement to provide for the safety of the public," the Democrats said.

A key element of the bill is the creation of a Massachusetts Peace Officer Standards and Training Commission. The majority of members of the independent state entity would be civilians. The commission would have independent power to investigate misconduct.

The commission would serve as the civil enforcement agency to certify, restrict, revoke, or suspend certification for officers, agencies and academies. It would also be able to refer cases for criminal prosecution and report annually to the Legislature, governor and the attorney general.

Baker declined to comment directly about the bill Tuesday, saying his office hadn't had time to study the legislation, which was released late Monday. But Baker said the issue of police accountability is important to him.

"I'm glad the Legislature is moving forward on this," Baker said.

The State Police Association of Massachusetts said in a statement that it "creates layers of unnecessary bureaucracy and costly commissions staffed by political appointees with no real world experience in policing and the dangers officers face every day."

In a letter to members, Massachusetts' largest law enforcement union called the bill a "final attack on police officers by lawmakers on Beacon Hill."

Scott Hovsepian, president of the Massachusetts Coalition of Police, wrote that the proposed Massachusetts Peace Officer Standards and Training Commission would be able to revoke an officer's certification even before a complete internal investigation and disciplinary hearing occurs.

"What was supposed to be a reasonable and thoughtful process to establish sensible police reforms is now a runaway train that must be stopped," the union wrote.

Eddy Chrispin, a Boston police sergeant and president of the Massachusetts Association of Minority Law Enforcement Officers, said there is a lot of good in the bill, including better training. But he said he has concerns about other parts he says would impact officers' due process rights.

"We've always known that there was a need for change in policing. We embrace it," Chrispin said. "But I think some of these legislators should have gone out and engaged people in conversation to find out what their concerns are."

More on the Police Reform Bill 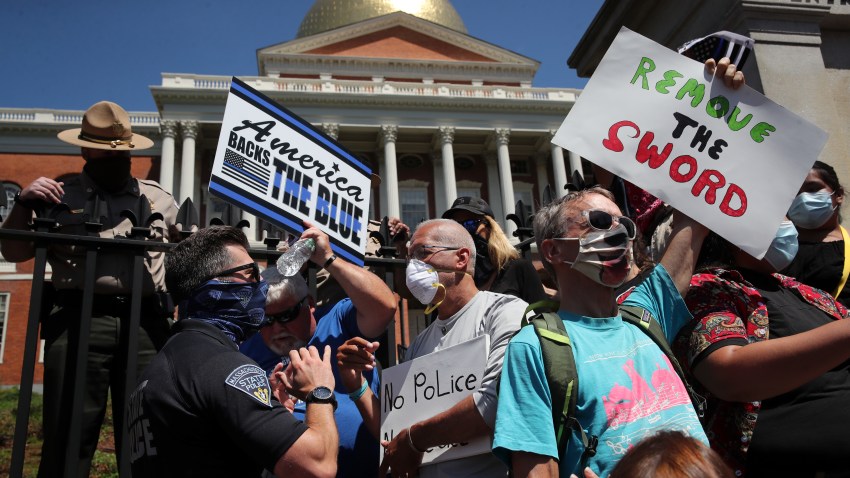 The bill would also make clear that qualified immunity shall not extend to a law enforcement officer who "violates a person's right to bias-free professional policing if that conduct results in the officer's decertification."

Efforts to limit qualified immunity — which largely protects police from being civilly liable for excessive use of force — have come under criticism from police unions and supporters who argue that officers should not have to worry about potential lawsuits while on patrol.

Democratic U.S. Rep. Ayanna Pressley hailed portions of the bill including the ban on chokeholds and limits on no-knock warrants but said more needs to be done.

"For far too long, the doctrine of qualified immunity has protected the very people charged with enforcing the law from any consequence for breaking it, allowing police officers to use their badge as a shield from accountability," Pressley said. "The legislation does not go far enough to address this systemic problem."

The legislation is in part a response to statewide demonstrations following the May 25 killing of George Floyd, a Black man, by a white Minneapolis police officer.