MBTA staff are developing a plan to restore a small amount of bus and train service in the summer and fall, laying groundwork to start unwinding COVID-era cuts that in some cases have yet to take effect.

Officials at the transit agency on Monday said they would recommend increasing the frequency of trips on buses and rapid transit in the summer based on crowding observed this spring. For the fall, they suggested additional restorations on the bus network and an assess-and-adjust process for subways and trolleys.

MBTA staff who outlined the planning at a Monday board meeting said they will target an increase in bus service hours from 88 percent of pre-COVID levels in the spring to 90 percent in the summer and then as high as 93 percent in the fall.

Several major details are still not known, and the T will not finalize its summer schedules until later in March. The plan presented Monday does not include any additional changes to its commuter rail system, other than a schedule flattening that officials unveiled last month, or to its ferry network.

If the T's board embraces the idea, it would be one of the first steps to bump service back up after board members in December narrowly approved a package of service cuts aimed at saving money and adapting the system to lower ridership during the COVID-19 pandemic.

Fiscal and Management Control Board Vice Chair Monica Tibbits-Nutt flagged concerns during Monday's meeting that the timeline might be too constrained to respond to evolving demand because the T starts to build its summer schedule by the end of this month.

As the Massachusetts coronavirus vaccine rollout continues, more groups have become eligible, but many are still wondering when it will be their turn — including transit workers.

While MBTA Deputy General Manager Jeff Gonneville said the agency could try to force additional flexibility where needed, he said leaders will need to "make some assumptions" about summer ridership trends based on data over the next three weeks.

Tibbits-Nutt said the state's vaccination schedule could leave ridership stalled for the next few weeks before a jump in late April or May.

MBTA officials estimated Monday that the changes will net about $21 million in cost savings in fiscal year 2021, which the agency plans to pocket to grapple with continued budget pressure in FY22.

Overall, the T this spring will run about 90 percent as much service as before the pandemic with ridership hovering around 30 percent its prior levels.

The board voted unanimously Monday to approve equity and environmental analyses that concluded the service cuts will not cause disparate impacts on minority or low-income populations.

Many activists and riders remain frustrated with the T's approach. The Transit is Essential coalition, which includes several transportation, environmental and labor groups, on Monday criticized the continued implementation of cuts that it said "punish essential workers and the people who rely on transit the most."

"The Baker Administration has failed to make a clear case for why these immediate, harmful cuts are necessary. What is clear is that essential workers and riders making essential trips will bear the brunt of this decision," the coalition said in a statement. "Current ridership and funding are sufficient to keep running existing service. The MBTA's longer term financial challenges -- which existed prior to the pandemic -- must be addressed by the Legislature through recurring and dedicated transportation funding."

Under the projections that officials presented Monday, the T expects to face budget gaps between $201 million and $495 million each year from FY23 to FY26. The T's budget this year is about $2.3 billion.

The models used do not anticipate ridership or fare revenue returning to pre-pandemic levels by the end of that outlook, and they also do not include any workforce reductions or fare increases in their outlook.

The latest MBTA long-term estimates also do not include any funding from the latest federal stimulus package, which will direct about $30 billion to transit agencies across the United States.

MBTA officials said Monday they do not yet know how much the T will receive, even after FMCB Board Chair Joseph Aiello asked for a rough estimate.

"Even at the upside, it might solve for FY23 and probably doesn't solve for all of FY24, that's for sure," Aiello said.

The Transit is Essential coalition said it believes the agency can expect "at least" $700 million, calling it "roughly equivalent to an entire year of MBTA fare revenue before the pandemic, and enough to address any shortfalls in the MBTA budget for at least two fiscal years."

Baker Discusses What the ‘Next Normal' Could Look Like in Massachusetts 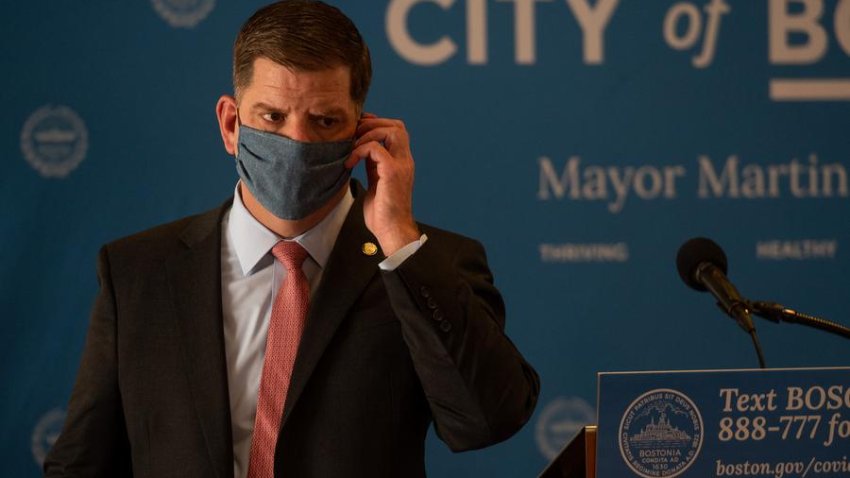