Scattered rain moves in between 6 a.m. and 9 a.m. across the south coast. Temperatures in the Worcester Hills, through southern New Hampshire will be near freezing so freezing rain is a concern 3 a.m. to 11 a.m.

Isolated slick spots are possible, but temperatures increase to above freezing during the afternoon. There will be a few dry hours in the afternoon. Another wave of heavier rain moves through the evening. Total rainfall looks to be about 0.25” to 0.5” north of the Mass Pike and 0.5” to 1” south.

Sunday will turn windy with gusts between 25 and 35 mph from the northwest. Highs in the 40s. 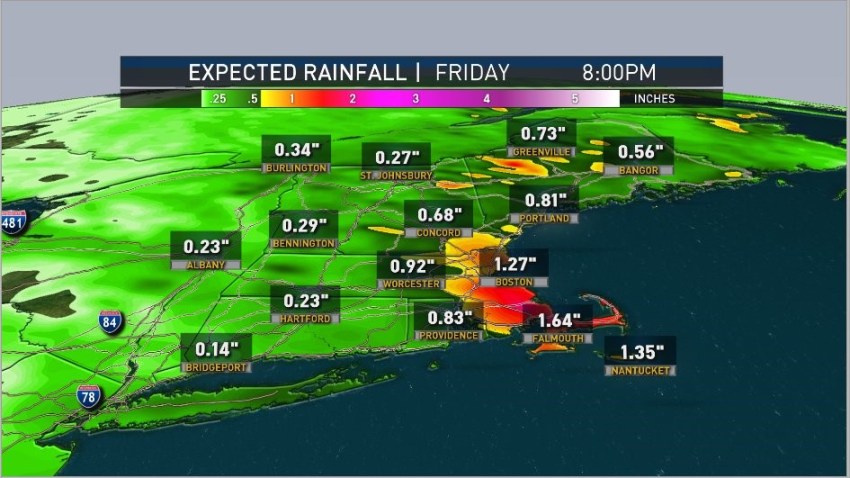 Some of the season’s coldest temperatures could be on Monday morning with cold Canadian air spilling air. Highs Monday will be around 30 degrees with sunshine.

Tuesday is a First Alert weather day. Tuesday morning is when the highest impacts may occur, with heavy snow northwest, and brief snow accumulation near Boston then changing to rain later. The freezing line placement is uncertain based on the different tracks on different forecast models. We are more confident in heavy snow across northern New England and more of a snow-changing-to-rain scenario across southern New England. Stay tuned to the First Alert Weather Team for further updates on this storm system.

Colder air may stick around for a longer time period through the rest of the 10-day forecast. Another round of snow is possible as we near the following weekend.