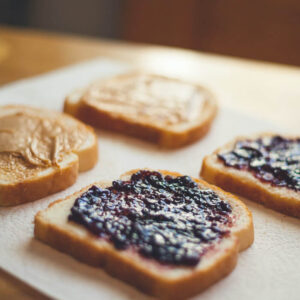 Last week we announced that the new Stonewall Kitchen had opened a new location in Fort Point on Congress Street.

In addition to featuring specialty foods, this new shop will also feature a cafe selling soups, salads, sandwiches and coffee. Sounds simple and exciting enough, right? Well, this opening is not without controversy. The name of the cafe within the Stonewall Kitchen is called PB&J Cafe – with a menu chock-full of peanut butter items.

What’s the big deal with the name?

Well, the new store/cafe is located in the same building at The Boston Children’s Museum. The museum leases the space to the PB+J Cafe and many children have peanut allergies that can be deadly. So maybe not the best combo.

When the museum’s Facebook page erupted into a storm of parental outrage, the museum and Stonewall Kitchen issued the following statements:

From the Children’s Museum:

Celtics Vs. Heat Takeaways: Marcus Smart Does It All in Game 2 Win

WATCH: Celtics Bench Goes Ballistic as Marcus Smart Crosses Up Max Strus Out of His Shoes

Thank you to all who shared concerns about Stonewall Kitchen’s new Café. The safety and wellbeing of all children is our top priority and we want to address your comments. Stonewall Kitchen is an independent company, and separate from the Museum space. We have shared your concerns with Stonewall and they have responded with the following statement. It’s important to note that no food of any kind is allowed in the Museum exhibit halls. We understand this may not allay all of your fears, but we are committed to your safety and will continue to monitor this over the coming weeks.

We appreciate your concerns about allergens at our recently-opened Stonewall Kitchen Café. The health and safety of our guests, especially children, is our primary priority. Please be assured that we genuinely understand the gravity that this allergen poses for some children (and adults) and are diligent to follow all regulations and protocols to keep people safe. As a food and restaurant company regulated by the FDA and numerous other agencies, we manufacture and serve products with nearly every major allergen, so we are acutely aware of the risks associated with allergens.

In the case of our new café in Boston, there are a few important points to note:

While there is an entrance from the Boston Children’s Museum to our store and café, it is through a separate set of doors past the “brown bag” lunch area, which does not exclude peanut butter or other allergens on the premises, similar to other cafeterias. Importantly – visiting the museum does not require anyone to pass through the completely separate brown bag area, or through the doors into the Stonewall Kitchen store or café.

That entrance, as well as the primary entrances from Congress Street, also feature very visible allergen warnings on the doors, consistent with those on our other stores and café. As with any specialty food store or restaurant, those with allergens certainly do need to be aware before shopping at any Stonewall Kitchen store or Cafe. In addition to serving food that may contain allergens at the Café, we typically provide free samples of various products throughout our stores (though that has been temporarily suspended during COVID). For example, we proudly serve clam chowder in the Cafe, which contains shellfish, and sell milk which is of course a dairy allergen.

Lastly, we do happily provide alternatives to peanut butter for those desiring sandwiches, including almond butter or jam-only options.

Thank you for expressing your concerns. We hope this is helpful in clarifying that our new Stonewall Kitchen Café and Store are completely separate from the Boston Children’s Museum, and in deciding whether you or your children can safely visit our café and store.

For anyone who has a child with food allergies – in particular nut allergies, this issue is not to be taken lightly.

You can see the full battle here on Facebook.

The post PB+J Controversy in the Neighborhood appeared first on Caught In Southie.