A 29-year-old man allegedly stole a lobster truck in Charlestown carrying more than $10,000 in lobsters, then crashed into a truck employee's vehicle during a chase

A man stole a lobster truck early Tuesday morning in Boston, then intentionally crashed into another vehicle that had chased him before being rear-ended by another lobster truck, police said.

The man whose truck was stolen was able to stop it from getting away by blocking the street with his personal vehicle, which was T-boned in the process, according to a Boston police report detailing the incident.

Police arrived to Main Street in Charlestown, where the crash took place, shortly after 12:30 a.m., to find a 29-year-old man from South Boston being detained by EMTs.

A woman in Sandwich, New Hampshire says a hungry bear made its way into her car and ate her lobster roll.

The officers there learned that the man had stolen the box truck while it was being loaded with at least $10,000 worth of lobsters, police said.

The truck thief, identified in the police report as Stephen Woodard, jumped into the cabin and sped away.

Employees got into another box truck and started chasing the man, catching up with him near the intersection of Medford Street and Main Street, police said. 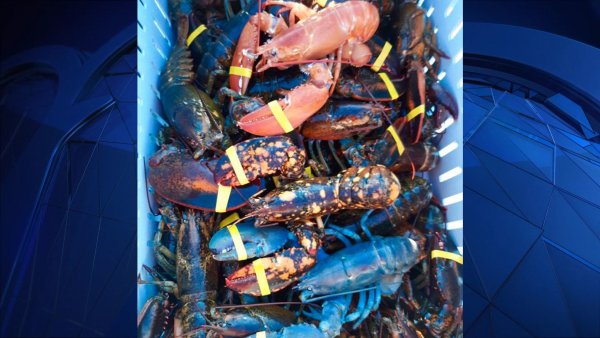 Woodard crashed the stolen truck into the personal vehicle of the initial driver, who'd been chasing him, while the second lobster truck rear-ended the first, according to the police report.

The truck was stolen in the first place when its driver had left it idling in a loading dock while he went to the bathroom, according to the police report. When he came back, he saw the truck driving away, he told officers, and drove after his stolen lobster truck in his personal vehicle.

He caught up with the stolen truck not once but twice, according to the police report, first opening its door and being briefly dragged along the street, then again when he drove in front of the truck Woodard was allegedly driving.

The employees detained Woodard until police arrived. Officers found him with a bloody, injured face, according to a police report.

Woodard was taken to Massachusetts General Hospital by ambulance and, according to the police report, threatened to kill an officer who was keeping watch over him.

Woodard was set to be arraigned on charges of receiving a stolen motor vehicle, operating on a revoked or suspended license, assault and battery with a dangerous weapon and threats to commit harm.

It wasn't immediately clear if Woodard had an attorney who could answer to the charges.