On a rainy, dreary Monday in which a shot at the No. 1 seed in the AFC playoff picture is seemingly dead, not all hope is lost for the New England Patriots.

Even had the team prevailed on Sunday against the Chiefs, they'd still be behind the 8-ball that is the Ravens (11-2), who went on the road and took care of the Bills to take a one-game game lead over the 10-3 Patriots - with a head-to-head tiebreaker to boot.

While jarring indeed that this will, in all likelihood, be the second time in the last five seasons that New England started out 8-0 or better without securing homefield advantage throughout the postseason, reasons for optimism remain after a 23-16 defeat marred by poor officiating.

Here's why you shouldn't be writing your obituaries on the 2019 Patriots - or the whole dynasty - just yet.

Officiating, at least partially, cost the team vs. the Chiefs

The refereeing debacle has already been discussed ad nauseum in the recap of Sunday's game, but it bears repeating. If N'Keal Harry's catch was correctly ruled a touchdown - or the whistle hadn't prematurely blown on Stephon Gilmore's fumble recovery - the Patriots are perhaps chasing only three points on their final, ill-fated drive of the game rather than seven. Meaning a field goal could have potentially sent the game to overtime. 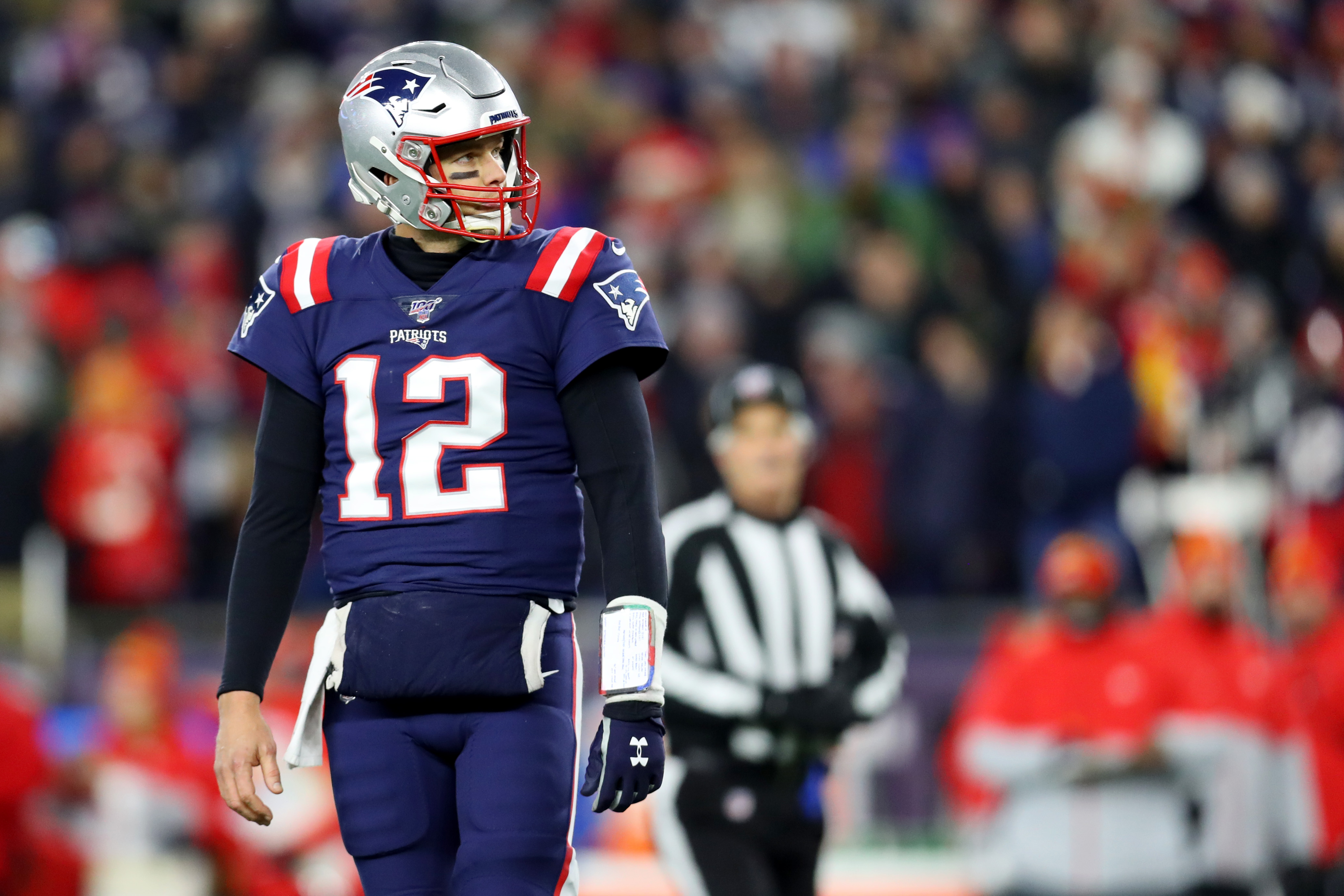 Sharks Are Circling Around Patriots: Upsides, Downsides to KC Loss 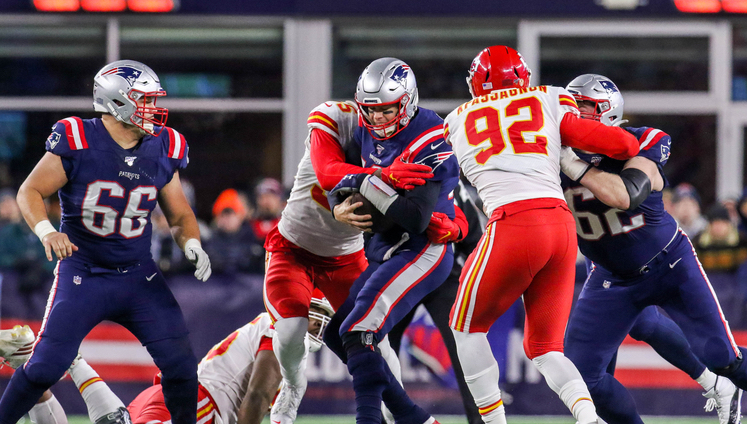 Why Rodney Harrison Senses ‘Panic' From Patriots After Loss to Chiefs

There's still no guarantee that the team ties the game in this kicking dystopia we're living in, but that's a separate issue. There was also the non-call on what sure looked to be pass interference on Phillip Dorsett in the fourth, on which the mild-mannered receiver said he was "99 percent confident that I was interfered with but there wasn't a call."

New England may not have played particularly well over the course of the game, but they played well enough to win. Both things can be true, but thanks to Jerome Boger and his crew, we'll never know how it should have shaken out.

"The covering official on the wing was blocked out by defenders," Boger told ESPN's Mike Reiss on the Harry non-TD. "The downfield official who was on the goal line and looking back towards the field of play had that he stepped out at the 3-yard line. So, they got together and conferred on that. The final ruling was that he was out of bounds."

But why not rule the play a touchdown, knowing that would trigger an automatic review for a scoring play?

"Those two officials who were covering it, they look at it in real time," Boger said. "This case was unique in that the guy who would have ruled touchdown had him short. So maybe if that ruling official on the goal line had a touchdown, we could have gotten into that, but thought that [Harry] stepped out of bounds. The goal line wasn't in the play."

Except that it was, Jerome.

The Chiefs only scored two touchdowns

Patrick Mahomes was still quite good for Kansas City, settling in nicely after throwing a pick to J.C. Jackson on his first series of the game. But the Patriots, by and large, held his weapons in check. Tyreek Hill had six catches for 62 yards, the second game in a row he's looked merely pedestrian against New England; after averaging seven catches for 138 yards and two touchdowns in his first two career games against the Patriots, Hill had a one-catch outing against New England in January before Sunday's modest showing.

Ditto for Travis Kelce, who was still effective on Sunday (seven catches, 66 yards, rushing touchdown), and to a lesser extent, the overrated Sammy Watkins (four catches, 50 yards). They were factors, but not the factor.

The adage that Bill Belichick will take away your strengths held true on Sunday, as the only truly bad play by New England's defense was allowing rookie Mecole Hardman to take the top off the secondary with a 48-yard touchdown catch.

Just for good measure, the Patriots limited the Chiefs to 75 yards on 29 carries. This was a great offense that New England played, and there's zero shame in giving up 23 points to it - including just a field goal in the second half.

"I'm really proud of the way our team competed tonight," Belichick said. "Those guys went and battled for 60 minutes. It wasn't always perfect, there were certainly things we could have done better, but we were competitive right down to the final play and that'll serve us well going forward."

Julian Edelman is getting better with age

At 33, Edelman is the third-oldest wide receiver in the NFL in 2019 behind only Larry Fitzgerald and Ted Ginn Jr.

At an age where the majority of players at his position are either in decline or out of the league entirely, Edelman is third in the league in receptions (90), eighth in the league in yardage (1,010) and perhaps most impressive of fall, second in snaps played among wide receivers (797).

Despite routinely drawing double teams and taking a beating on Sunday, Edelman emerged with eight catches for 95 yards and a touchdown off a flea-flicker. It was the sixth straight game he's led the Patriots in receiving yards and the eighth time overall in 2019.

Why on earth should there be optimism surrounding a player who saw the field for a grand total of two snaps on Sunday?

Because Harry showed on that one play the pure athleticism that got him drafted in the first round to begin with.

Harry came across the formation pre-snap and caught a short pass from Brady in the flats. After creating separation from the initial defender, Frank Clark, the 6-foot-4, 225-pound Harry proceeded to break not one, not two, but three tackles on his way to the end zone, demonstrating an awareness of where to plant his foot along the sideline in the process before laying out for the pylon.

"N'Keal has made progress in every area," Belichick said after Sunday's game. "There's a lot of ground for him to make up based on when he came back off of injured reserve in mid-season. He's working hard at it, he's improving, but as I said, he's got a way to go. We'll try to utilize our team and our players the best way we can based on all the circumstances that are involved in each and every game."

With next to no contributions from Mohamed Sanu or Phillip Dorsett on Sunday, it makes little sense to continue to bury Harry on the depth chart. Unleashing him against a sorry team like the Bengals could be just what he needs to gain some confidence heading into the playoffs.

The Texans are no longer a threat to catch the Patriots

Coming off their 28-22 victory over the Patriots last Sunday, how did the Texans respond?

By falling behind the previously 4-8 Broncos, 38-3, before losing 38-24. Houston is now 8-5, tied with the Titans atop the AFC South. The Texans play Tennessee twice in the final three weeks, but even if they win out, the best they can get to is 11-5.