I-290 eastbound traffic in Worcester was detoured off the highway at Exit 21 for a few hours after the fatal crash Sunday night, MassDOT and state police said. The victim was identified Monday as a 31-year-old Marlborough man; his name has not been released.

A 31-year-old Massachusetts man is dead after a wrong-way crash on Interstate 290 in Worcester, late Sunday night, authorities said.

According to state police, troopers were called around 8:52 p.m. for a single-car spinout crash on I-290 eastbound in the area of the Burncoat Street exit (Exit 23/Route 70). As troopers began heading toward the scene, state police received another call moments later reporting a wrong-way driver going west on the eastbound side of I-290 approaching downtown Worcester.

At 8:55 p.m., state police say they found the wrong-way vehicle -- a Honda Accord sedan -- just after Belmont Street (Exit 21, Route 9). It had just crashed head-on into a Toyota Highlander SUV that was traveling on the eastbound side of the highway.

Investigators determined that the Accord was the vehicle that had spun out several minutes earlier. A preliminary investigation revealed that the Accord was traveling eastbound on I-290 when the driver, for reasons still being investigated, lost control of his car and crashed into the concrete median barrier separating the highway in the area of Exit 23. The Accord ended up facing the wrong direction, and the driver subsequently began driving the wrong way on the highway.

At the same time, the Highlander was approaching the same location and the two vehicles collided head-on in the area of Exit 21, state police said.

The wrong-way driver, a 31-year-old Marlborough man, was freed from the wreckage by first responders and pronounced dead on scene, state police said. The Highlander driver, a 24-year-old Worcester man, was taken by ambulance to UMass-Lakeside Medical Center in Worcester with non-life threatening injuries.

Photos from the scene showed two badly-damaged cars on the highway, facing opposite directions, and NBC10 Boston obtained dash-cam footage that was recorded just before the wreck, showing a car driving on the wrong side of the highway.

All eastbound lanes were closed following the fatal crash, and traffic was detoured off Exit 21, authorities said. State police added there was no significant backup despite the lane closures and detour. The scene was cleared as of 11:40 p.m., and all lanes had reopened.

The victim's name is not being released at this time. An investigation into the deadly crash remains ongoing, and police have not yet said if weather played any kind of factor.

A winter storm moved into New England Sunday evening, bringing with it snow, rain and a messy mix that was expected to make the region's roadways dangerous to travel on through Monday.

The initial burst of snow was forecast to change to rain and/or sleet by midnight, meaning there will be icing overnight and into the morning -- making for slick travel and slippery walking -- before we all turn back to snow by noon Monday.

The Massachusetts Department of Transportation issued a storm advisory Sunday night, advising travelers to expect a wintery mix of rain and snow that will impact travel -- especially on any untreated roadways -- through Monday night.

MassDOT said travelers should exercise caution, especially in areas of higher elevation, primarily the northern and western parts of Massachusetts and along the New Hampshire border.

MassDOT said crews did pretreat the roadways Sunday in advance of the storm, and more crews are ready to deploy in ice and storm operations all day Monday and into the early morning on Tuesday. Transportation officials added that there were approximately 500 pieces of equipment deployed in storm operations Sunday night.

Due to the forecast, state police imposed a 40 mph speed restriction on Interstate 90 between the New York border and Westfield (at Mile Marker 41).

Poor road conditions had also factored into the decision for many schools to close Monday, including Worcester.

Worcester was one of the first local school districts to announce it had canceled classes Monday, with school officials explicitly noting the expected snow accumulation during the afternoon dismissal and likely road conditions.

Head Start, before and after school activities, and programs are also canceled, the district said. The administration offices will be open, however.

Some kids, like Aaliyah Laporte, said they were ready to make the most of the snow day, but for those who have a Monday morning commute ahead of them, the slushy start to the week won't be very fun.

“We’ve got a lot of hills here in Worcester so people – there’s traffic, the roads are tight, and there’s mainly main roads out here that everybody travels through so it gets real congested. And messy out here,” Worcester resident Darenson Alexis said.

The City of Worcester posted a weather advisory on social media, reassuring residents that Department of Public Works crews are on duty and prepared to treat roads, as needed, through the spells of snow and rain.

Drivers were also reminded to use caution in the overnight and early morning commutes.

“The state and the city are doing a pretty good job keeping up, sanding and plowing and all of that,” Mike Largesse said.

Losing power is also a concern with any winter storm in New England.

National Grid said Sunday that it was prepared for a winter storm to impact Mass. Sunday afternoon through early Monday morning, bringing a wintry mix of snow and rain along with strong winds into the region.

The utility company shared several tips, as well, reminding people not to touch downed power lines, to keep phones and devices charged, to grab bottled water, to report outages, and to check on elderly family members or neighbors who may need help.

More on this storm 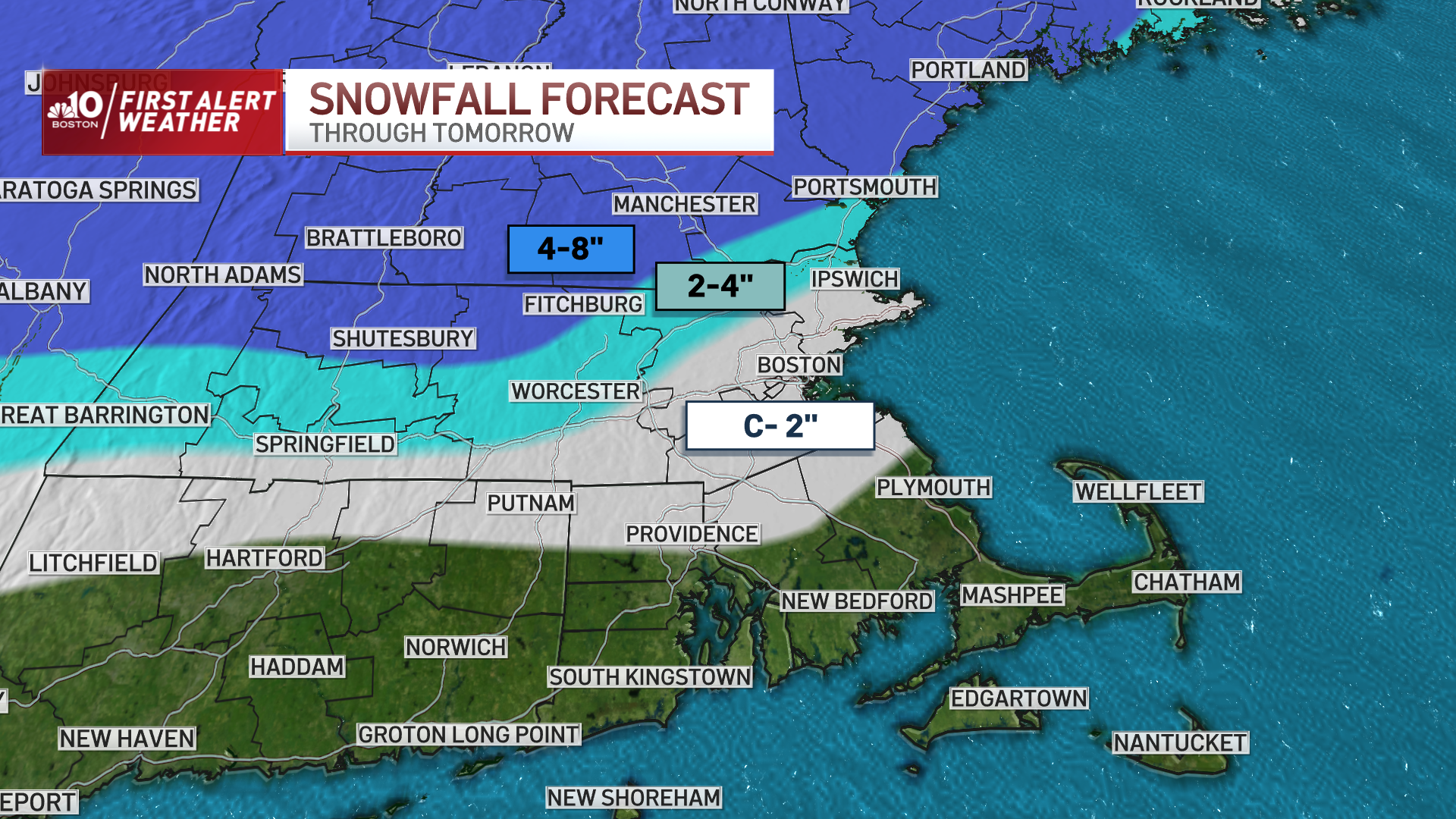 Messy Storm Underway in New England, When and Where Does Snow Turn to Rain? 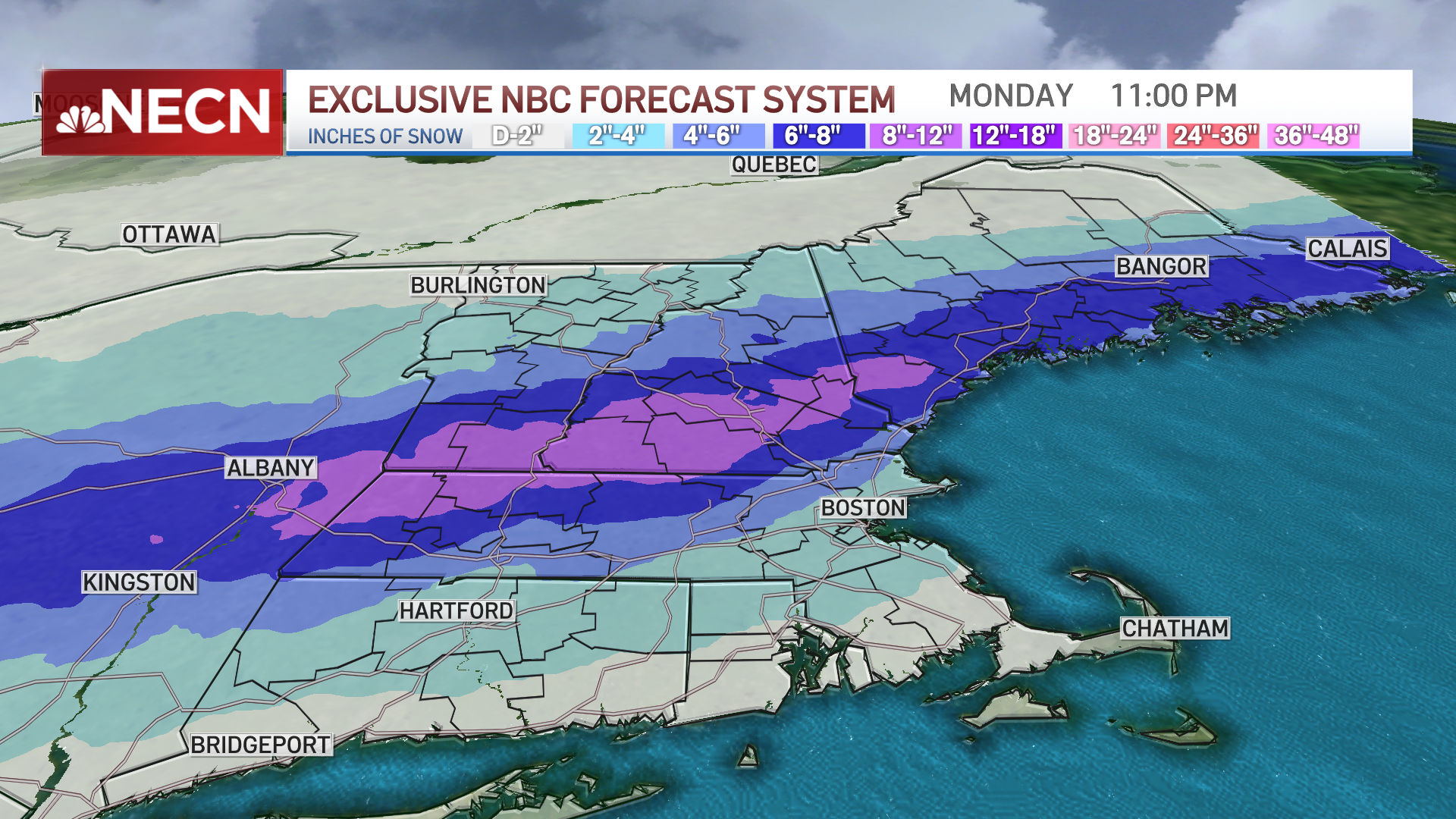