At 9:52 on Sunday night, the New England Patriots scored a touchdown. Fireworks were launched around the perimeter of Gillette. It appeared the smoke never cleared.

The Patriots have since confirmed that they stopped shooting off fireworks and muskets after that out of concern that it would add to the fog. 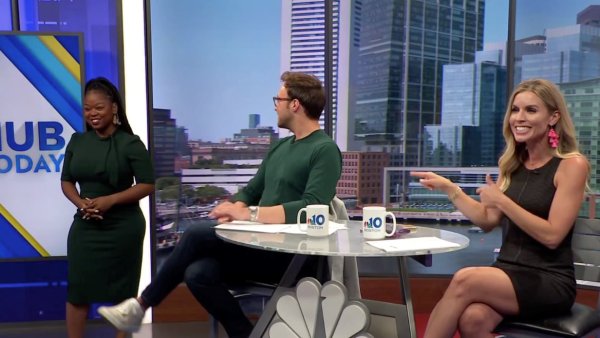 Our sister station NBC Sports Boston got some sound from players on both teams.

"I’ve never," Pats running back Dion Lewis said, "seen anything like that before."

Tom Brady also weighed in, "Yeah, the fog – that was crazy," he said. "I have never seen that. It was just so still out there. The fog had no place to go. I don’t think it affected much, really, at the end of the day. I’m sure it looked cool on TV, though."

"I mean, a deep ball up in the air was definitely more difficult," Rob Gronkowski said. "But, it didn’t change anything in the game."

After the Patriots beat the Falcons 23-7 in the rematch of Super Bowl LI, Rob Gronkowski spoke about his blocking play that helped get Brandin Cooks into the end zone. The tight end also says he has never seen anything like the fog that fell over Gillette Stadium Sunday night.

Atlanta Falcons star Julio Jones watched his words. "It didn’t affect me, but it’s crazy, though," he said. "Like, they score and they shoot fireworks off and then it sits high, kind of in the stadium. So it’s kind of hard, like, if you do get behind, like, how can you throw deep balls and things like that, because it’s foggy? I mean, it didn’t affect us at all though. They were just the better team tonight."

Jones didn’t ACTUALLY blame the fireworks, but what he explained is a temperature inversion. This is what the temperature profile looked like from the National Weather Service in Taunton, Massachusetts:

Typically, when you go "up" in altitude, the temperature cools. When you fly, have you noticed the temperature drops into the double digits below zero - even in the middle of summer?

On Sunday night, temperatures warmed with height. It was 59 degrees at the surface and 67 degrees at 1,200 feet. That’s called an inversion. Winds are typically light or even calm with inversions – that is why the smoke never cleared.

OK, so that explains the smoke, but why the fog? With clear skies and light winds, temperatures quickly cooled off in Foxborough. As temperatures cooled, the air mass became saturated. Once the temperature drops to the dew point (the temperature where the lower atmosphere becomes saturated), fog forms. It’s called radiation fog.

Before the Falcons faced the Patriots in a Super Bowl rematch, quarterback Matt Ryan, who has been friends with Ice Bucket Challenge inspiration Pete Frates since both athletes attended Boston College, chatted with the Frates family on the sideline at Gillette Stadium.