Some See Irony in Virus' Impact on Mayflower Commemoration

After three years of renovations on the replica Mayflower II, the coronavirus has postponed exhibitions and festivals that had been planned to mark the 400th anniversary of the Pilgrims arrival at Plymouth

The year 2020 was supposed to be a big one for the Pilgrims.

Dozens of events — from art exhibits and festivals to lectures and a maritime regatta featuring the Mayflower II, a full-scale replica refitted over the past three years at a cost of more than $11 million — were planned to mark the 400th anniversary of the religious separatists' arrival at what we now know as Plymouth, Massachusetts.

But many of those activities have been postponed or canceled due to the coronavirus pandemic. And historian Elizabeth Fenn finds a certain perverse poetry in that.

"The irony obviously runs quite deep," says Fenn, a history professor at the University of Colorado Boulder who has studied disease in Colonial America. "Novel infections did MOST of the dirty work of colonization."

Disease introduced by traders and settlers — either by happenstance or intention — played a significant role in the "conquest" of Native people. And that inconvenient fact, well known to the Natives' descendants, is contrary to the traditional narrative of the "New World."

That narrative has been attacked in recent months, as statues of Pilgrim predecessors Christopher Columbus, Spanish conquistador Don Juan de Oñate and other "colonizers" have been toppled and defaced. The counter-narrative sees people like the Pilgrims not as rugged pioneers and adventurers, but as part of a slow-motion genocide.

"The Mayflower came and the settlers came, and they're considered FOUNDERS," says historian and journalist Paula Peters, a member of the Mashpee Wampanoag Tribe. "But in fact, they were takers."

Plymouth wasn't the first or the largest or most successful of the English settlements. But it has taken an outsized place in the American story.

"Regardless of anything that came before or after, Plymouth is the 'once upon a time' to the story of the United States — the symbolic, if not literal, birthplace of our Nation," declares the website for Plimoth Plantation, a reconstructed Pilgrim settlement and living history exhibit.

But the 102 passengers aboard the Mayflower — equal numbers "saints" and "strangers" — did not cross the Atlantic to establish a democratic society. When they set sail from Plymouth, England, on Sept. 16, 1620, they were escaping religious persecution — and looking for a place where they could prosper.

After more than two months at sea, the Pilgrims landed at the place the Wampanoags called Patuxet, meaning "at the little falls." When they disembarked from the leaky, fetid carrack, they stepped foot on a land already cleared by death's scythe.

In the years preceding the Pilgrims' arrival, the Native inhabitants of southern New England had been ravaged by what some scientists refer to as a "virgin soil" epidemic. The unidentified disease, perhaps introduced by European fishermen who plied the waters from Maine to Narragansett Bay, burned through village after village, killing up to 90% of some tribes.

"I passed along the coast where I found some ancient (Native) plantations not long since populous, now utterly void; in other places a remnant remains, but not free of sickness," Capt. Thomas Dermer wrote in a 1619 letter to a friend back in London.

Dermer's guide was Tsquantum — the Native interpreter better known as Squanto, who had been among 20 Wampanoags kidnapped by English explorers in 1614 and sold into slavery.

Dermer wrote that "my savage's country" was once home to roughly 2,000 souls.

"Portions of coastal New England that had once been as densely populated as western Europe were suddenly empty of people, with only the whitened bones of the dead to indicate that a thriving community had once existed along these shores," Nathaniel Philbrick wrote in his 2006 bestseller, "Mayflower."

Most American children grow up with the feel-good story of the Pilgrims: How Pokanoket sachem Massasoit extended the hand of friendship to the English settlers, helping them survive their first winter on these shores, and later joining them for the first Thanksgiving feast.

But there is a darker side to that tale, as related by Mayflower passenger Edward Winslow in his 1624 tract, "Good Newes From New England."

According to Winslow, Tsquantum spread a rumor that the Pilgrims kept barrels of plague buried in their storehouse, "which, at our pleasure, we could send forth to what place or people we would, and destroy them therewith."

According to Winslow, the interpreter used the threat of plague to strengthen his own position among his people. If true, the Pilgrims were all too willing to play along.

More on the Mayflower Renovations 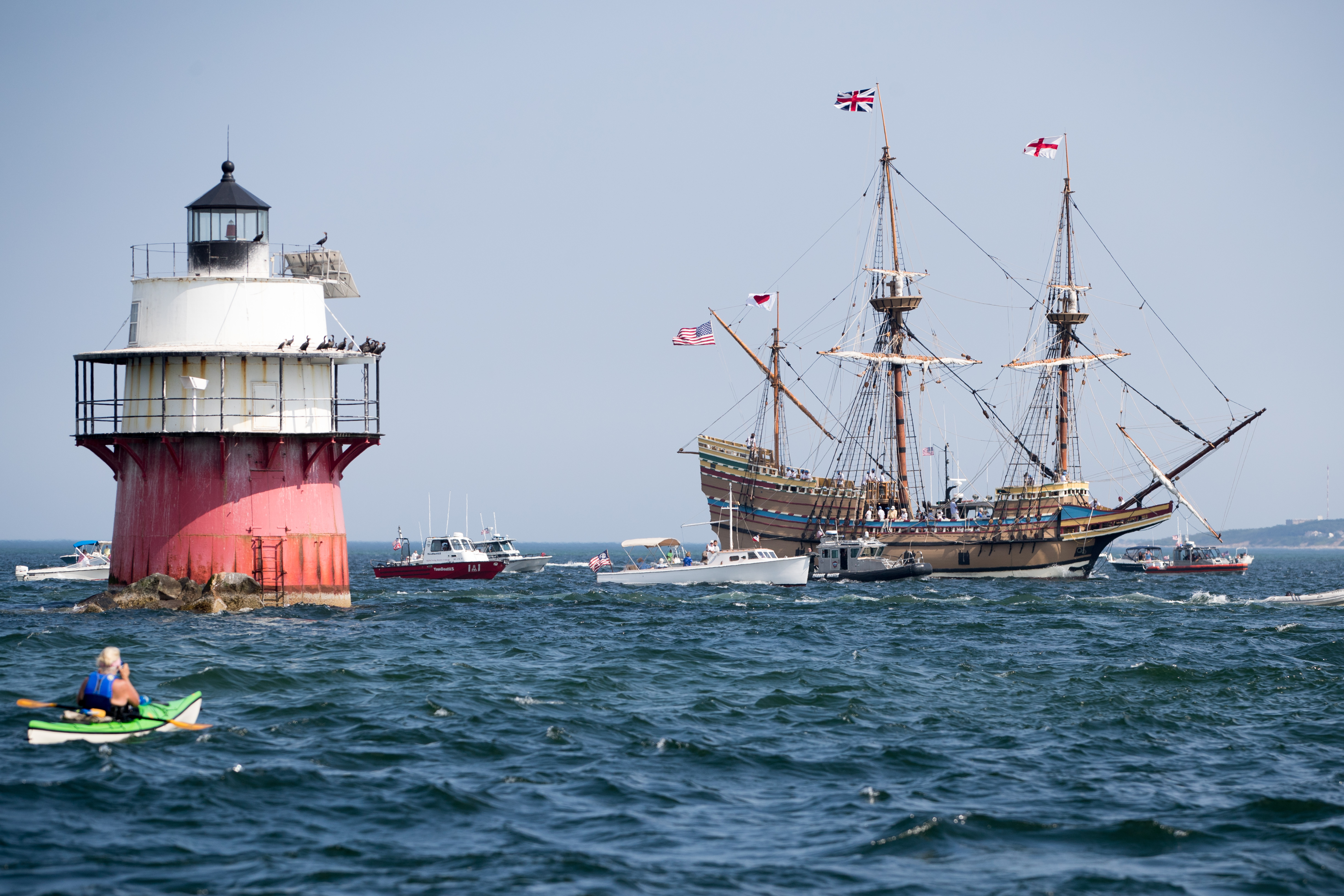 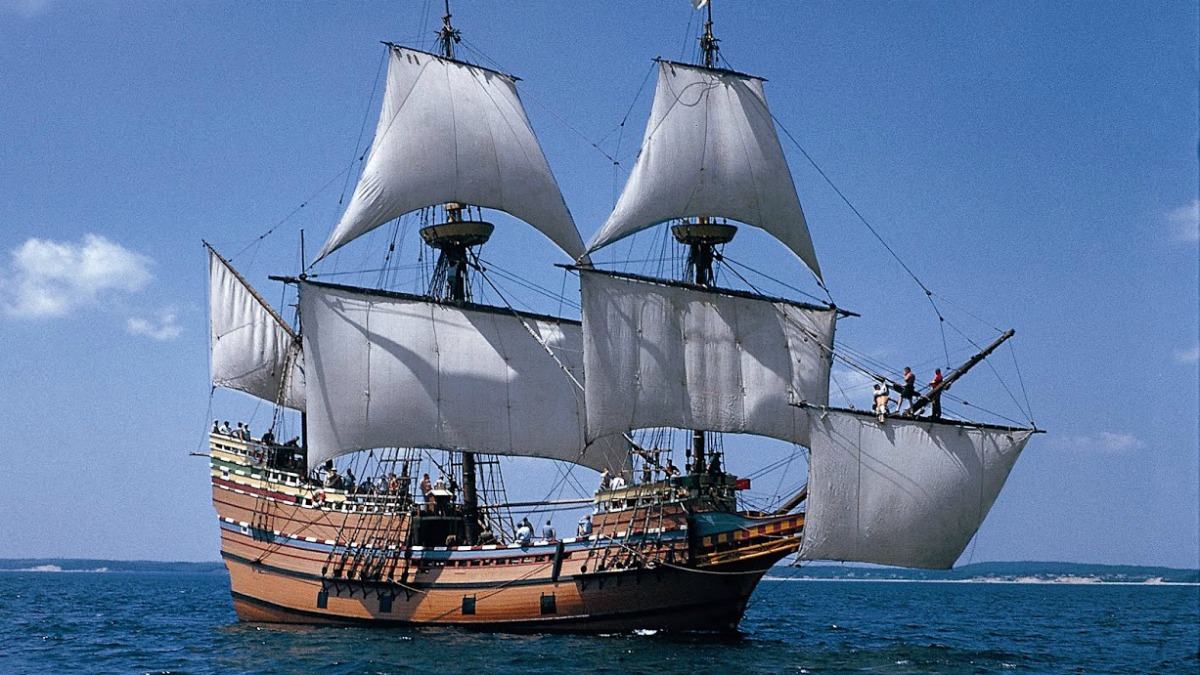 When Hobbamock, one of Massasoit's warriors, asked if they did indeed have such a weapon, one settler replied: "No, but the God of the English had it in store, and could send it at his pleasure to the destruction of his and our enemies."

The recent epidemic had decimated the Pokanoket, but had largely spared their chief rivals, the Narragansett. Some historians have suggested that Massasoit helped the Pilgrims, not of out kindness, but necessity.

Whether formed out of pity, fear or pragmatism, the alliance between Massasoit's people and Plymouth did not last long.

Within 55 years of the Pilgrims' arrival, his son Metacomet — better known as King Philip — was rallying the region's tribes to push the English back across the sea. And Gov. Josiah Winslow, Edward's son, dispatched soldiers into the forests and swamps to hunt them down.

In an article in last winter's Historical Journal of Massachusetts, Dr. John Booss of the Yale University School of Medicine argued that the "exquisite timing" of the Pilgrims' arrival in the wake of a deadly epidemic was one of the key factors in the colony's success.

"We are left with a tragic and paradoxical conclusion: Lethality in one population proved to be the means of survival for another group," Booss wrote. "Without the intercession of a highly lethal, geographically focused and time specific epidemic among the Wampanoag, the history of the Pilgrims, New England, and the mythos of America might have been very different."

But there is heated debate in the field over just how big a role disease played in the European domination of the continent.

In his groundbreaking 1972 book, "The Columbian Exchange," Alfred W. Crosby argued that the introduction of European germs among the "biologically defenseless Indians" brought about the collapse of the Aztec and Incan empires. His later writings helped cement the "virgin soil thesis" in academic and popular culture.

"It was their germs, not these imperialists themselves, for all of their brutality and callousness, that were chiefly responsible for sweeping aside indigenes and opening the Neo-Europes to demographic takeover," Crosby wrote.

Paul Kelton thinks focusing too much on disease is giving the colonizers a pass.

In a paper for the June edition of The Journal of American History, Kelton and co-author Tai S. Edwards argue that through war, legal maneuvering and debt peonage, "the colonizers bear responsibility for creating conditions that made natives vulnerable to infection, increased mortality, and hindered population recovery."

"Let's not give disease exclusive agency in allowing Europeans to take over," Kelton said in a recent interview. "In certain circumstances, it allowed them to establish beachheads. It worked synergistically with other aspects of colonialism. But, end of the day, there are human beings that are making decisions. And why are these decisions being made? Europeans seeing something they want and using whatever means they can to get it."

In the spring of 1763, Delaware, Shawnee and Mingo warriors laid siege to Fort Pitt, the site of present-day Pittsburgh. When Delaware emissaries tried unsuccessfully to convince the English to surrender and leave, English trader and militia captain William Trent sent them away with two blankets and a silk handkerchief from the fort's smallpox infirmary.

"I hope it will have the desired effect," Trent wrote in his diary.

Since smallpox was already present before the siege, Fenn and others think it is unlikely that Trent's "gift" had the desired effect. But Fenn says it is hard to overstate the role disease played in the conquest of North America.

In August, Native descendants from all over New England and beyond were set to converge on Plymouth — to dance and drum around a ceremonial fire, march through the town, and make offerings of tobacco and sage in homage to Massasoit and King Philip. The Ancestors March was listed as a "signature event" on the Plymouth 400 calendar.

"We were looking forward to it so we could actually speak our truth," says Troy Currence, a powwow or medicine man from the Herring Pond Wampanoag Tribe of Cape Cod. "That we're still here. We're not a destroyed people."

Sadly, the coronavirus — which has disproportionately impacted Native communities across the country — has also put these plans on hold until at least next spring. Meanwhile, they are sharing their history online.

Currence takes the pandemic as a sign that the country, and the world, are in need of a correction.

"Eventually, if you don't take care of Mother Earth and live in balance," he says, "the natural law is always going to win."

AP National Writer Allen G. Breed is a Massachusetts native and lineal descendant of Resolved White, who was 5 when he and his parents, William and Susannah White, arrived at Patuxet on the Mayflower.