We start off less icy this morning thanks to drier air, but much of New England where we had both snow and rain over the weekend, there are plenty of leftover icy side roads, sidewalks, and driveways.

An area of snow that caused travel problems in the Midwest yesterday is shrinking as it comes toward New England, however, a few snow showers are likely in western and northern New England. Otherwise, today will be mostly cloudy, with flurries, with a high in the 30s.

A much more impressive storm system forms in the lower Mississippi Valley with moisture from the Gulf of Mexico streaming in our direction tomorrow. The day should start off dry, but clouds thicken and snow develops by midday. The rain-snow line initially near Long Island should gradually move north to near the Massachusetts Turnpike by sunset. 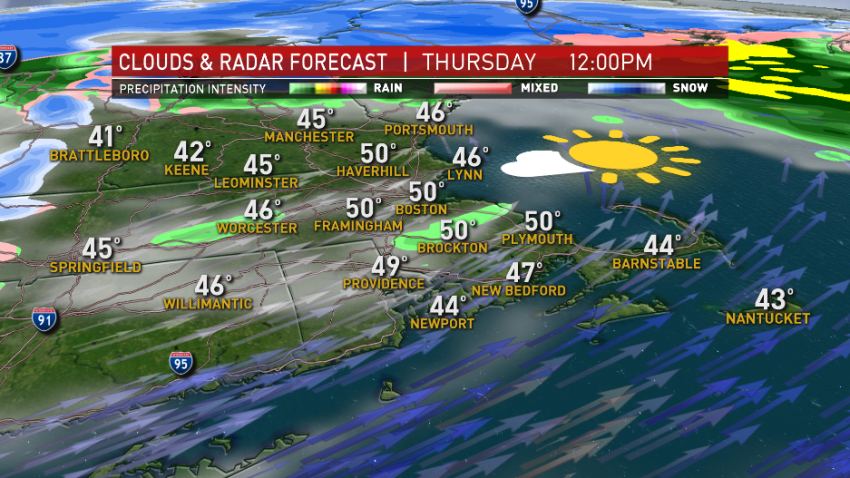 Snowfall rates of an inch per hour are possible with total accumulation of 5 to 10 inches north of the Massachusetts Turnpike.

From Hartford, Connecticut to Providence, Rhode Island and Boston, amounts should be in the 3 to 6 inch range with a change to rain and then back to snow Wednesday night.

There's also the possibility of some freezing rain in the interior of Massachusetts near Boston.

Temperatures hold in the 20s and 30s tomorrow and stay there at night.

Colder air comes in on the backside early Thursday with icy conditions possible to start the day. Then the sun will come out with temperatures in the 20s north and 30s south.

A wave of low pressure will come in on Friday with clouds and a chance of light snow in the afternoon, high temperature in the 30s.

Maybe a dusting of snow early on Saturday, then a mixture of sun and clouds temperatures in the 30s.

Then for Sunday, much like we just encountered yesterday, a chance of rain south and snow during the day and overnight.

It's a very active weather pattern, with no significant change in sight.

Timing and placing of the system is low to moderate confidence in the longer range, so they'll be some changes to the forecast as we get closer.