The Never-Ending Argument Over Space Saving in Boston

This week's storm brought up the age-old question once again 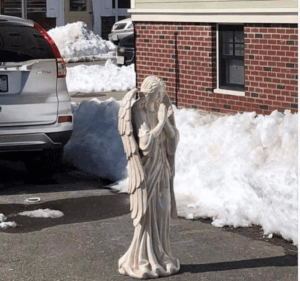 Once again, the debate over space savers has reared its ugly head. This time, brought up by a journalist who no longer lives in Boston and a politician with one foot out the door – both of whom – have driveways.

City Councilor Matt O’Malley stirred the pot by reaching out to Boston Globe journalist Billy Baker (born and raised in Southie) now residing in the suburbs to bring up the issue of banning space savers in the City of Boston.

“…I have been constantly dragged into our annual fight over the once-quaint and currently ludicrous practice of claiming ownership of a public parking spot just because there’s snow on the ground,” Baker states in his column.

First, why is it so “ludicrous” to save a public parking spot for 48 hours. As a homeowner, it is incumbent on me to shovel the public sidewalk that abuts my property or risk getting fined by the City of Boston. It’s public property that I am responsible for. Second, I appreciate the fact the city gives us 48 hours to claim the spot that I spent hours shoveling. Public land is claimed all the time via developers for dumpster, constructions equipment and for moving trucks etc. There is a permit fee for those situations but the “fee” we pay is shoveling out the city street.

Back in 2015, the South End officially banned the use of space savers. This was right before Snowmagedon. At the time, I worked as firefighter in the South End, and that winter it was disaster navigating the streets for fire trucks and ambulances. No one shoveled out their spots. They just plowed out, leaving snow in the street and the next car couldn’t fit all the way in the spot. Many cars were left hanging out into the street, blocking passage for other vehicles – especially large public safety trucks.

Just because neighborhood groups deem this anti-space saver movement a “success”, doesn’t mean it is. I guarantee some residents feel differently.

Baker mentions the annual argument he has with his father about the fact that Baker has a driveway.

“My parents still live in Southie, and my dad loves to play the driveway card when we have our annual argument over space savers. In his telling, it takes hours and hours and hours to shovel out a single car, but the snow in my driveway just magically takes care of itself?”

I realized that shoveling out a driveway is not an easy task. It takes the same time and effort to shovel out a car on the city street. So Billy, would you be willing to let a neighbor park in your newly shoveled driveway while you look for another one to park in?

It’s optimistic to think that people will be civilized enough to shovel out a spot for hours after a giant Nor’Easter and then just happily give it up. In Southie, this is never gonna fly based on the following scenario:

You spend hours shoveling out your car and leave the spot so clear of snow, you can see the asphalt. The person with the big pick up truck who lives up the street just plows out of the spot without shoveling at all. Ironically, he ends up in the spot you shoveled out (leaves his car there for a week) and you are left with his spot. You shovel again.

Needless to say, we can think of a million different scenarios where we’d like to think we’d be civilized and not get upset or annoyed but we are only human.

The City of Boston has enacted a 48-hour policy to allow for saving a spot on the city streets. We have to admit, 48 hours goes by so quickly. Seventy-two would be delightful, but 48 is reasonable. There’s always going to the guy who’s gonna try and keep it going until March, but don’t be that guy.

To answer the question posed in the title of Baker’s column, “Is this the end of for space savers?” I certainly hope not. I have a feeling that the battle of the space savers will go on forever. Your opinion on this subject probably won’t change... unless you move to the suburbs and have a driveway.

The post The Annual Never-Ending Argument Over Space Saving appeared first on Caught In Southie.