State and local police searched Freeman Lake in Chelmsford, Massachusetts, after a kayak capsized and a man was reported missing

Crews who were searching Monday for a missing kayaker in Chelmsford, Massachusetts, found a body believed to be his.

The tragedy began to unfold in the middle of Freeman Lake around 12:20 p.m. Neighbors who live along the water say some people heard a man screaming for help.

First responders located a kayak in the lake, but there was no sign of the man.

They used a drone, a helicopter and a dive team, eventually finding an adult male in water that was about 13 feet deep.

"I'm very sad," said neighbor Darlene Farrell. "It really hit me hard because I kayak all the time."

"There's no current," said Farrell. "There's a lot of milfoi. If you don't wear a vest and you go down, you may not come up."

It's unknown if the man was wearing a life jacket or a helmet.

"It's got some muddy areas," said Rich Gingras, who also lives along the lake. "The deepest part of the lake is maybe 12, 15 feet, it's not violent waters at all."

It's a popular lake for swimming, kayaking and fishing, but on a cold and windy day like Monday, there are fewer visitors.

Neighbors say they had seen the man fishing at Freeman Lake before.

"We see a lot of people that kayak," said Wanda Dunn. "I live right on the lake, so we're always saying hi to people when they go by, ask how the fishing is, and so we've seen him out here."

It's unknown what caused the man to end up in the water.

The Office of the Chief Medical Examiner of Massachusetts will identify the man and determine the cause and manner of death, police said. 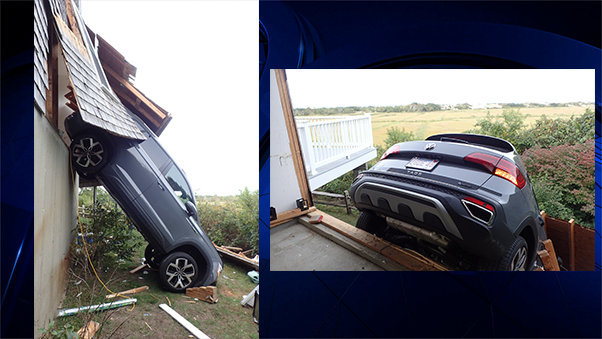 Car Crashes Through Back of Garage on Cape Cod