UPDATED: Where Will Tropical Storm Henri Make Landfall? How the Track Has Shifted

Models have at points showed Henri plowing into Boston and Cape Cod, then nearly taking aim at New York City, and now heading for Rhode Island

People across the Northeast have been watching the forecast for days, looking to get a sense of where the storm that is now Tropical Storm Henri would make landfall.

Its track has shifted -- earlier this week, the storm was taking aim at Cape Cod and Boston, and both places were preparing for first direct hit by a hurricane in 30 years. But just a day later, the track had moved west, putting Connecticut, Long Island and nearly New York City directly in the crosshairs.

On Saturday, when Henri became a hurricane, the track had shifted east again, and the hurricane appeared to be headed for landfall on the coast of southern New England or Long Island.

And by 11 a.m. Sunday morning, when the center of Henri was near Block Island about 50 miles south-southwest of Providence and the storm had been downgraded to a tropical storm, the National Weather Service expected that Henri will make landfall by the early afternoon in Rhode Island, then cut across Connecticut toward western Massachusetts.

Sunday: Hurricane Henri makes landfall at the south coast by midday with damaging wind and waves at the coast. heaviest rain to the west of the track along the CT/RI border. Wind gusts from the southeast past 70 mph east of the track with possible severe storms and isolated tornadoes. Rainfall amounts of several inches west of the track. Northern New England is much drier with little wind. High in the 70s to low 80s. Monday: Wind lets up, tropical downpours continue, especially west where major flooding is possible. But we are all vulnerable to downpours. Very humid with highs near 80 with sunny breaks too.

No matter where it strikes land, the storm is expected to have regional effects -- Amtrak service from Boston to New York was suspended, and hundreds of thousands of people across several states may lose power by the time Henri is carried out of the U.S.

Henri was upgraded to a hurricane with the National Hurricane Center’s advisory Saturday.

As we continue to monitor the storm, here's a look at how the National Hurricane Center forecasted the storm's track every six hours, starting Tuesday afternoon (check the date and time in the bottom left of each image). Below these images, we'll explain why the forecast tracks shift -- it's all part of the science.

And conditions can change, which means that up-to-date modeling changes, too. As our own meteorologist Pete Bouchard explained earlier Saturday, "tropical systems are steered by fickle winds. And they’re easily swayed in one direction or the other by shifts in those winds over time. Tacking a course in a certain direction doesn’t guarantee it will continue in that direction ad infinitum."

In other words, shifts in the forecast can actually be expected in the lead-up to major storms as the experts keep a close eye on conditions.

Here's one last look at how the forecast track for Henri has changed, this time as a slider: 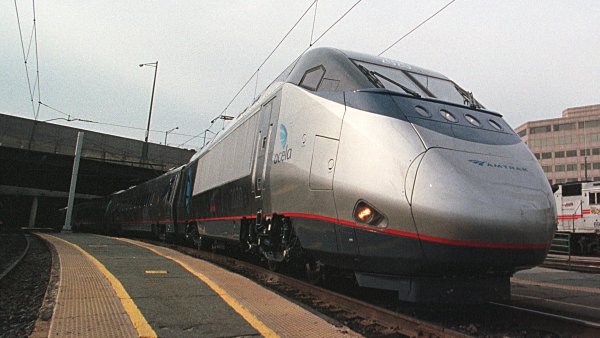 Amtrak Cancels Service Between Boston and NY Due to Hurricane Henri