If passed, the legislation would put limits on the use of force by law enforcement officers

Six months after George Floyd died under the knee of a Minneapolis police officer, state lawmakers on Tuesday night sent Gov. Charlie Baker a policing tactics reform and oversight bill, shifting the focus to the Republican governor whose views on qualified immunity and other thorny details of the legislation remain unclear.

The House and Senate both voted Tuesday to accept a compromise bill that's been under negotiation between the House and Senate since July. The legislation would create a new oversight panel responsible for licensing all law enforcement officers in Massachusetts every three years, and it would put limits on the use of force, including tactics like chokeholds.

Baker said he was still reviewing the legislation, which was only just released Monday night, but already the governor was facing pressure from both sides to either sign it quickly, or reject it and start over in the new session in January.

"I'm glad the Legislature moved forward on this. I'm glad that this was something that was part of what they considered to be important to get done before the end of the session. But I can't speak to the specifics of this until we have a chance to review it," Baker said at a press conference where he was discussing the state's response to COVID-19.

Baker could sign the bill, veto it, or return it with amendments that the Legislature would have to consider. Based on the margins Tuesday, Democratic legislative leaders do not appear to have the votes they would need to override a veto from Baker, whose Republican colleagues in the Legislature all voted against the bill and were joined by a significant number of Democrats in both branches.

The 92-67 vote in the House to accept the conference committee report fell short of the two-thirds majority that would be needed to override a veto. The Senate's 28-12 vote only barely clear that threshold.

In both branches, votes on whether to approve the compromise bill -- taken during a lame-duck session -- were narrower than passage of the original reform legislation from which it was built. The Senate's original bill passed 30-7 in July, while the House approved its version ten days later with a 93-66 vote.

Rep. Carlos Gonzalez, the Black and Latino Legislative Caucus chair who participated in the private negotiations on a final bill, said the legislation addresses "inequity that for too long, for too many years, has gone with rhetoric and no real action."

"Even when you only have a few bad apples, the process as we know it today and the internal investigation process of police policing themselves needs an overhaul," said Gonzalez, a Springfield Democrat, citing news coverage of Boston police officers whose legal troubles vanished and a Department of Justice investigation that found serious problems in a Springfield police unit.

"Police misconduct must not be given a pass any more," Gonzalez added. "The time is here and the moment is now."

Baker supports the creation of a commission to certify and decertify police officers, but a bill he filed in June proposed a different makeup of the panel and did not address controversial issues like qualified immunity for police officers.

Throughout the process, Baker has not discussed his feelings about specifics in the various legislative proposals, and on Tuesday said he had to review the final bill before commenting.

The governor in June outlined his own reform bill, under which Massachusetts would start a wide-ranging effort to crack down on police violence and improve transparency by implementing a certification system and stripping licensure from officers who commit egregious violations.

"The murder of George Floyd in Minneapolis at the hands of police officers made clear that now is the time to get this done," Baker said at the time. "There are no easy answers, and improving our law enforcement is only one piece of this process, but I think we've put together a solid set of reforms that everyone, including the law enforcement community and the folks who are here with us today, can work on to advance this bill together."

Sen. Sonia Chang-Diaz, the only woman of color in the Senate and a member of the conference committee, called the final bill "bold," crediting those who protested in the streets after the killing of George Floyd with pushing policy makers on Beacon Hill to act.

The Senate observed a moment of silence for eight minutes and 46 seconds in memory of Floyd before voting to accept the compromise.

In the House, Cronin said video of Floyd's death at the hands of police was an image she could never forget.

"I believe in my heart and soul that history will look back on this vote kindly and we will be on the right side of history, so I ask you to make your grandchildren proud by joining me in support of this measure," Cronin, an Easton Democrat, said.

During debate in the House and Senate, many speakers cited the names of victims of police brutality, warning that violence by law enforcement is disproportionately directed at people of color.

The bill creates a nine-member police accountability panel, known as the Massachusetts Peace Officer Standards and Training (POST) Commission, that would certify officers every three years and could revoke certification for officers found to commit wrongdoing, such as excessive use of force or falsifying timesheets.

Brownsberger said the six civilians on the POST commission was an important aspect of the Massachusetts model and unique in a country where other POST boards are dominated by law enforcement. This new panel would have three seats for law enforcement, including one police chief and one minority officer.

The Belmont Democrat said 90 percent to 95 percent of police officers are doing the job the right way for the right reasons, but he said public trust has been destroyed by the actions of just a few.

Senate Minority Leader Bruce Tarr, who voted against the bill, said the POST Commission should have been more balanced, with a stronger voice for law enforcement, and worried that lawmakers were moving too rashly to limit the use of facial recognition technology and risked unintended consequences in the manner it proposed banning chokeholds.

Republicans in the House slammed the short timeframe for considering the bill -- the vote on accepting the conference committee's report came just about 24 hours after the panel finished its private negotiations -- and reiterated their concerns with its scope.

Rep. Timothy Whelan, who alongside Tarr was one of the two Republicans on the conference committee, argued that lawmakers can "do better" on a reform package that works for stakeholders across the spectrum.

Whelan, a former State Police trooper, took particular issue with the bill language removing qualified immunity protections in cases where an officer's actions result in decertification by the oversight board.

"We're stripping it just from law enforcement here, and rest assured, we'll be coming after somebody else's qualified immunity tomorrow," he said. "It's the same as in the House bill. Sixty-six of you voted against this bill in July because you disagreed with qualified immunity. It still exists in this bill."

U.S. Rep. Ayanna Pressley, a Boston Democrat and the only Black member of the state's Congressional delegation, credited the bill with "a number of long overdue reforms that will help increase police accountability in the Commonwealth," and said she hoped Baker would sign it into law.

Pressley specifically noted the ban on chokeholds and limits on no-knock warrants, standards for the use of force, and restrictions on the use of facial recognition software.

"In this moment of national reckoning on police brutality and systemic racism, it is incumbent upon all of us at all levels of government to be bold and relentless in our pursuit of policies that address the crisis of police brutality plaguing Black and brown communities," Pressley said.

But she also said the bill did not go far enough in restricting the application of qualified immunity to protect police from civil lawsuits for actions taken on the job.

The two unions representing State Police troopers and more than 4,300 uniformed police officers in cities and towns around the state blasted the compromise, with one union calling it a "final attack" on law enforcement.

"They seek to punish police just for being police," said Scott Hovsepian, the president of the Massachusetts Coalition of Police.

MassCOP said it planned to lobby Baker to reject the Legislature's reforms to qualified immunity, as well as some of the disciplinary procedures laid out in the bill that the union views as undermining officers' due process rights. 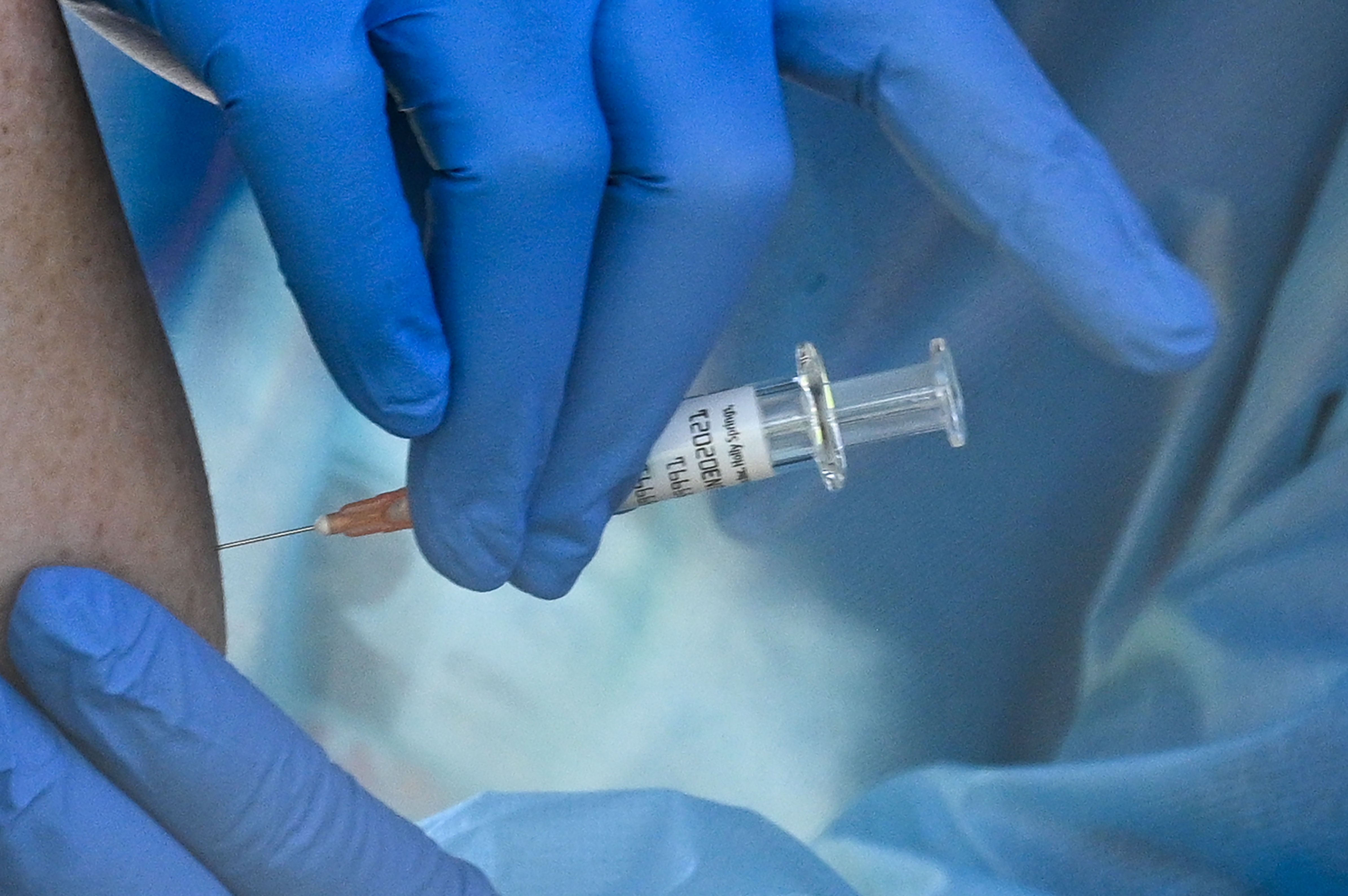