Otoman Adel Abid, a student from Iraq, fled to Poland from the western Ukrainian city of Lviv

The mass exodus of refugees from Ukraine to the eastern edge of the European Union showed no signs of stopping Monday, with the U.N. estimating more than 520,000 people have already escaped Russia's burgeoning war against Ukraine.

Long lines of cars and buses were backed up at checkpoints at the borders of Poland, Hungary, Slovakia, Romania and non-EU member Moldova. Others crossed the borders on foot, dragging their possessions behind them.

Several hundred refugees were gathered at a temporary reception center in the Hungarian border village of Beregsurany awaiting transport to transit hubs, where they would be taken further into Hungary and beyond.

Maria Pavlushko, 24, an information technology project manager from Zhytomyr, 100 kilometers (60 miles) west of the Ukrainian capital, Kyiv, said she was on a skiing holiday in the Carpathian mountains when she got word from home that Russia’s invasion had begun.

“My granny called me saying there is war in the city,” she said. At Rare UN Session, Russia Is Pressed to Stop War in Ukraine 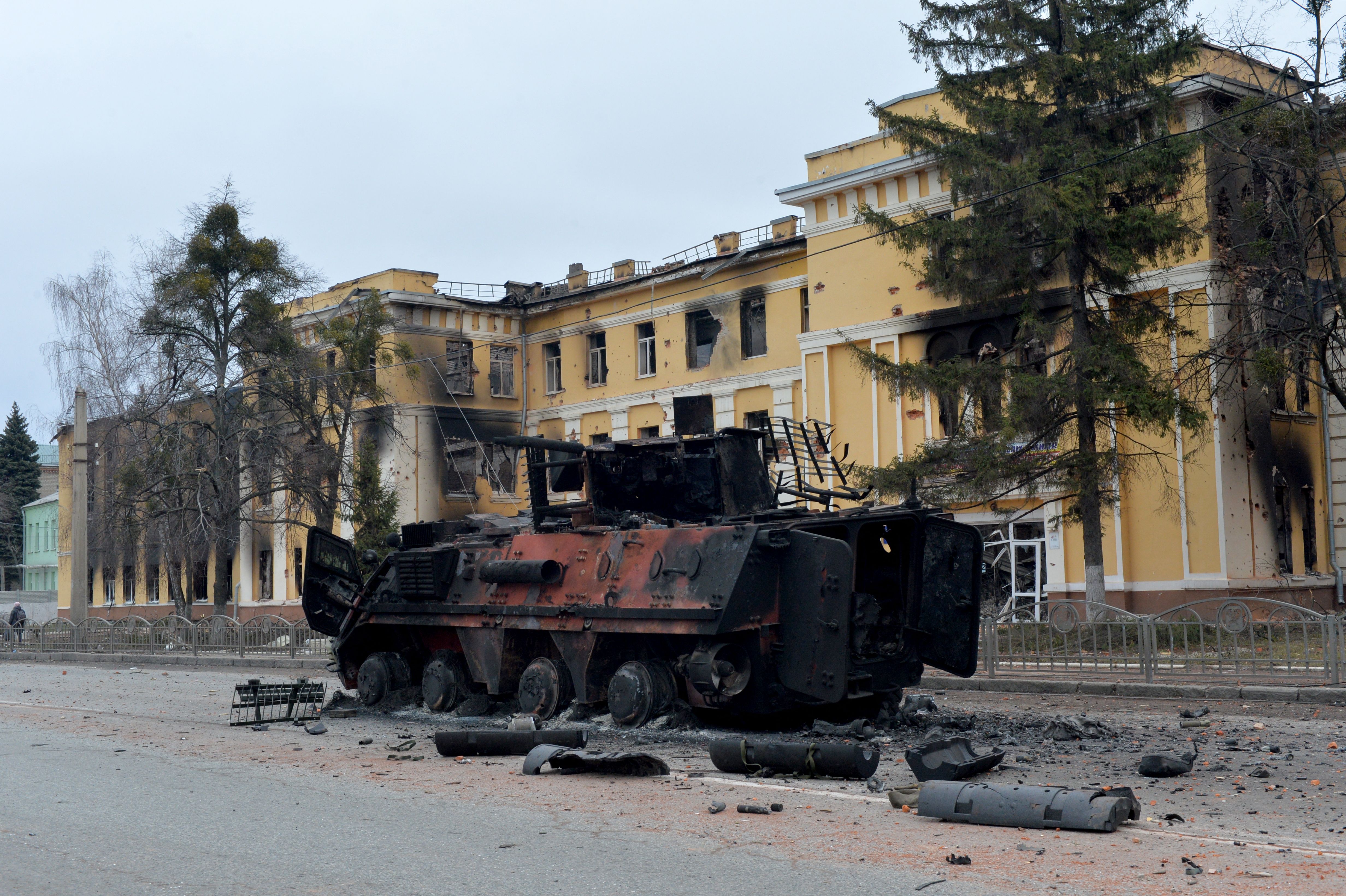 Pavlushko plans to travel from Hungary to Poland, where her mother lives. But her grandmother is still in Zhytomyr, she said, and her father stayed behind to join the fight againstthe invading Russian forces sent in by Vladimir Putin.

Many of the refugees in Beregsurany, as in other border areas in Eastern Europe, are from India, Nigeria and other African countries, and were working or studying in Ukraine when the war broke out.

Masroor Ahmed, a 22-year-old Indian medical student studying in Ternopil in western Ukraine, came with 18 other Indian students to the Hungarian border. He said they hoped to reach the capital of Budapest, where India’s government has organized an evacuation flight for its citizens.

While Ternopil had not yet experienced violence when they left: “It might be that there is bombing next hour, next month or next year. We are not sure, that’s why we left that city.”

Hungary, in a turnaround from its long-standing opposition to immigration and refusal to accept refugees from the Middle East, Africa and Asia, has opened its borders to all refugees fleeing Ukraine, including third-country nationals that can prove Ukrainian residency.

As part of an agreement with some foreign governments, Hungary has set up a “humanitarian corridor” to escort non-Ukrainian nationals from the border to airports in the city of Debrecen and the capital, Budapest.

Priscillia Vawa Zira, a Nigerian medical student in the eastern Ukrainian city of Kharkiv, said she fled toward Hungary as the Russian military commenced an assault.

“The situation was very terrible. You had to run because explosions here and there every minute," she said.

U.N. High Commissioner for Refugees Filippo Grandi, speaking by video to the U.N. Security Council, said more than 520,000 refugees had fled Ukraine, a number he said “has been rising exponentially, hour after hour."

The U.N. expects the total to reach 4 million in the coming weeks, Grandi said.

A maternity ward was moved into a bomb shelter in Kharkiv, Ukraine.

In Poland, which has reported the most arrivals at more than 280,000, trains continued to bring refugees into the border town of Przemysl on Monday. In winter coats to protect them against near-freezing temperatures, many carried small suitcases as they exited the station.

Otoman Adel Abid, a student from Iraq, fled to Poland from the western Ukrainian city of Lviv after he said panic broke out among many in the city.

“Everyone ran to buy some food and we heard bombs everywhere,” he told The Associated Press. “After that we directly packed our bag and clothes and some documents and we ran to the train station.”

Natalia Pivniuk, a young Ukrainian woman from Lviv, described people crowding and pushing to get on the train, which she said was “very scary, and dangerous physically and dangerous mentally.”

“People are under stress ... and when people are scared they become egoist and forget about everything,” she said. “People are traumatized because they were on that train.”

Maxime Guselnikov was leaving Poland to return to Ukraine to take up arms against Russia, he said, adding that his wife and daughter are still in Kyiv along with friends and colleagues.

“I return to Kyiv to fight,” he said. “The Russians came to kill our brothers, soldiers, our children, mothers, sons. I go to take revenge for it. I should react.”

Many of those fleeing Ukraine were traveling on to countries further west.

Aksieniia Shtimmerman, 41, arrived with her four children in Berlin Monday morning after a three-day journey from Kyiv.

Sitting on a bench inside the German capital’s main train station, she attempted to decipher a leaflet with instructions and maps on how to reach a shelter for new arrivals.

As she tried to comfort her crying 3-year-old twin boys, Shtimmerman said she had worked in telecommunications at a Kyiv university but was now only seeking a place where she and her children could eat, sleep and rest.

“I grabbed my kids on Friday morning at 7 a.m. to run away from the war,” Shtimmerman said. “I can’t even count anymore how many different trains we took until we arrived here.”

Germany’s interior ministry said 1,800 refugees from Ukraine had arrived by early Monday, but that the number was constantly growing as more trains from Poland arrived.

In the Romanian town of Siret, the EU commissioner for home affairs, Ylva Johansson, visited a border crossing where thousands of refugees were entering from neighboring Ukraine.

Johansson, who visited some of the humanitarian stations at the border, commended the “heartwarming” cooperation between volunteers and the authorities, and said the EU is united “in a way we have never seen before.”

She said it was a “very difficult time where we see war in Europe again, where we see aggression, invasion from Putin towards a sovereign, neighboring country.”

Europe is “showing that we are based on other values than Putin,” she said.