One of the Kentucky police officers involved in the raid was acquitted in early March, likely closing the door on the possibility of state criminal charges against any of the officers

A square in downtown Louisville was engulfed with blue and silver balloons Sunday afternoon, as Breonna Taylor’s family, joined by demonstrators and organizers, gathered to honor the two-year anniversary of the Black woman’s passing in a botched police raid.

Taylor's mother, Tamika Palmer, stood at the center of a memorial made up of paintings, posters and flowers. Staring up at the sky, she let go of the last balloon as a crowd cried out Taylor’s name.

The memorial took place a couple of weeks after one of the Kentucky police officers involved in the raid, Brett Hankison, was found not guilty on charges he endangered neighbors the night he fired into Taylor’s apartment.

Taylor, a 26-year-old Black woman who worked as an emergency medical technician, was shot multiple times during the raid. No drugs were found in her apartment, and the warrant was later found to be flawed. 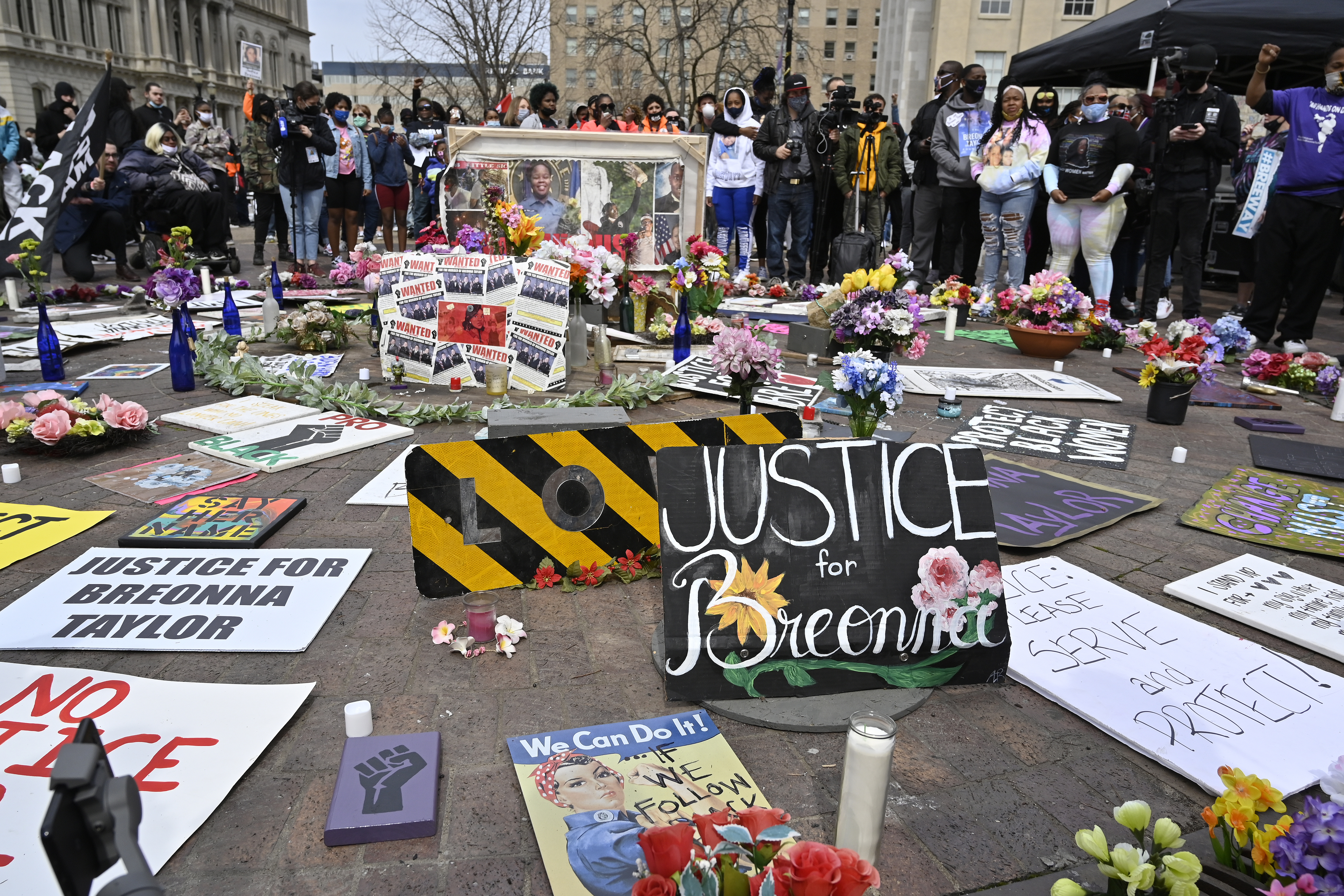 Kentucky Attorney General Daniel Cameron determined that the officers fired into her apartment in self-defense after Taylor’s boyfriend shot at them first as they broke into her apartment. Cameron, a Republican, acknowledged that Taylor’s death was heartbreaking but did not give a grand jury the option of charging anyone with killing her.

Taylor’s death helped spur massive racial injustice protests in the summer of 2020, along with the deaths of Ahmaud Arbery and George Floyd. In her hometown of Louisville, protests carried on for weeks, with many meeting in the city's downtown Jefferson Square Park to voice their frustration and disappointment that no officers were charged.

Clutching a microphone onstage Sunday, Taylor’s aunt, Bianca Austin, sharply condemned the Hankison verdict, insisting that the Louisville Metro Police Department has not been transparent with Taylor’s family or the city’s Black residents.

“Kentucky has failed Breonna Taylor. Kentucky has failed our community,” Austin said to protestors gathered in the square. Wearing a white T-shirt decorated with a portrait of her niece, she pointed in the direction of the Louisville Metro Police Department buildings.

“We demand the truth, we demand transparency,” she added. “We are going to continue to demand answers and we’re gonna continue to keep pressure on the Louisville Metro Police Department, who continues to fail us and our community.”

Democratic state Rep. Keturah Herron urged the demonstrators to vote out Jefferson Circuit Judge Mary Shaw, who signed the warrant for the raid. Shaw is up for reelection in 2022.

“We have an opportunity to get justice in a different type of way by going to the ballot box this election season,” Herron explained.

Kentucky Gov. Andy Beshear, a Democrat, tweeted a statement in support of Taylor’s family, including her mother.

“Thinking about Tamika Palmer today and holding her and all of those mourning the tragic loss of Breonna Taylor close in prayer,” he said. “Let us continue to work to build a safer, more just and equitable world full of love and compassion.”

An ongoing federal investigation could be wide-ranging and is regarded by many as the last chance for justice for Taylor’s death.

Police have said there is no footage showing the fatal shooting of Breonna Taylor in Louisville, Kentucky. But Sam Aguiar, an attorney for Taylor's family, filed a suit believing there is video footage that has not been seen. CK Hoffler, president of National Bar Association, discusses the suit.

Hudspeth Blackburn is a corps member for the Associated Press/Report for America Statehouse News Initiative. Report for America is a nonprofit national service program that places journalists in local newsrooms to report on undercovered issues.