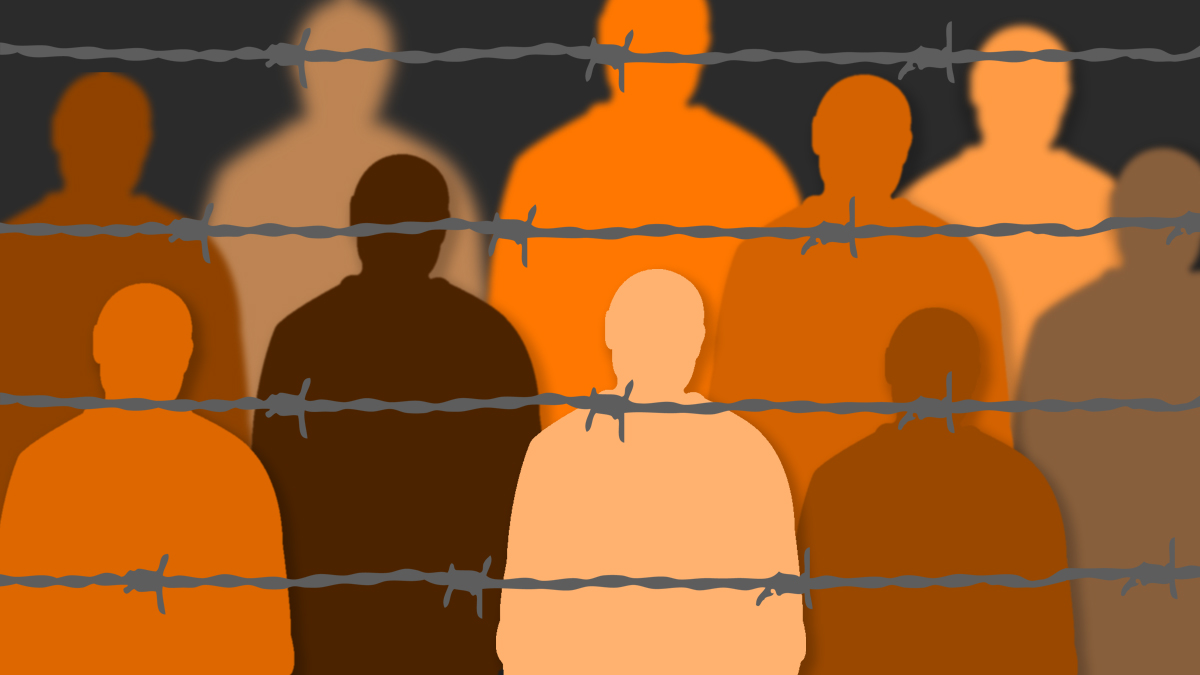 Immigration cases wind through courts with around a million-case backlog, months pass and civil detainees still find themselves inside facilities where they say they have no rights. As a result, some of them are turning to protest

Asylum seekers have been protesting at immigration detention centers around the country for months, advocating for their release.

But sit-ins, written complaints and other forms of dissent have done little to help their cause. Now, some of them are resorting to hurting themselves to bring attention to their immigration cases, according to detainees, an advocate and a federal official.

“This is what they’re having to do to get heard,” said Margaret Brown Vega, a volunteer with New Mexico-based Advocate Visitors with Immigrants in Detention in the Chihuahuan Desert.

There are two avenues through which asylum seekers can get out of detention while they pursue refuge in the United States, bond or parole. Both have become more difficult to obtain because of the policies of President Donald Trump’s administration.

This spring, Attorney General William Barr attempted to eliminate bond hearings for asylum seekers, but a judge blocked the policy change nationwide. That decision is under review by the ninth circuit.  Meanwhile, bond amounts have been on the rise for the last decade -- even before Trump took office. The median bond in fiscal year 2019 was $8,000, up from $5,000 in 2009, according to Syracuse University’s Transactional Records Access Clearinghouse (TRAC).

Parole has become more difficult to obtain, too. U.S. Immigration and Customs Enforcement’s New Orleans field office, for example, granted parole in fewer than 2% of cases last year at the detention centers under its purview, according to the agency’s data. That’s down from a 75.9% grant rate at the same field office in 2016, the last year of Obama’s presidency.

And so immigration cases wind through courts with around a million-case backlog, months pass and civil detainees still find themselves inside facilities where they say they have no rights. As a result, some of them are turning to protest.

In early August, Brayan Lázaro Rodriguez Rodriguez was detained at Pine Prairie ICE Processing Center in Louisiana and witnessed the aftermath of a hunger strike staged by more than 100 detainees in the center’s outdoor recreation area.

“The protest was always peaceful,”  he said. “There was never an intention to hurt an official, or anything.”

According to the Southern Poverty Law Center, ICE and its contractors used tear gas, rubber bullets and physical violence against the protesters at Pine Prairie and placed some of them in solitary confinement. ICE refutes reports of rubber bullets, but agency spokesperson Bryan D. Cox said officers did use pepper spray. He said detainees “refused to comply” with orders to disperse, and the incident warranted “a calculated use of force, consistent with agency protocol.”

Rodriguez told NBC that migrants who weren’t running away from the officers appeared to be too affected by tear gas.

Another detainee, Eliober Gonzalez-Lozano, said his 25-year-old son Erisbel seemed to choke and faint as chemical agents filled the air around the outdoor area. Eliober was escorted away in handcuffs, and for days,  he was isolated in a cell, unable to check on Erisbel.

“I thought that my son had died,” Eliober told NBC.

That same week, another protest at Bossier Parish Medium Security Facility in Louisiana was interrupted when detainees were pepper-sprayed after the sheriff’s office got involved, ICE confirmed.  After the back-to-back incidents, the SPLC sent a letter to the Department of Homeland Security’s inspector general requesting an investigation into how they believe ICE and its contractors “responded to detained immigrants peacefully protesting their indefinite and inhumane detention conditions with unlawful force, and improperly interfered with protected speech.”

“They come to the U.S. trying to exercise their right to protest, which is guaranteed by the U.S. Constitution regardless of their immigration status,” said Victoria Mesa-Estrada, a senior staff attorney with the SPLC. But when migrants organize, she warned, they’re retaliated against.

Cox said that claims of retaliation against protesters were false but added, “persons who violate facility rules are subject to discipline.” According to ICE’s detention standards,  discipline can include segregation, the agency’s version of solitary confinement.

In early December, the SPLC heard of yet another protest when they received a call from four asylum seekers at Winn Correctional Center in Louisiana. Detainees refused to return to their dorms from the patio because they wanted to be heard and to know why they were still detained, according to Magdalena Wright, the SPLC’s helpline intake specialist. In a statement, Cox said that officers again used pepper spray.

“All detainees subsequently became compliant,” he said in the statement. “This was a calculated use of force, consistent with agency protocol.”

Much like in Louisiana, men at Stewart Detention Center in Georgia tried to actively challenge their indefinite detention — and soon after,  they and an SPLC staff member say they were no longer allowed to go outside or see the sun. In September, a group of around 70 migrants sat in the facility’s recreation yard for almost a full day, according to accounts of the protest provided by the SPLC.

“They threw them to the floor, they hit them,” the Guatemalan man said. He told NBC that the phone lines were cut, and detainees couldn’t call anyone to tell them what was happening.

ICE did not respond to a request for comment about whether Stewart’s phones were working at the time. An agency spokesperson said that medical staff evaluated everyone who came in contact with the pepper spray, and one detainee had to be taken to the hospital.

In October, men at Stewart wanted to protest again, but officials stopped letting them go outside. The ICE spokesperson for Stewart confirmed that “out of an abundance of concern for the security of the facility and safety of the staff, all detainees were restricted from the recreation yards” and were given “additional indoor recreation time.”

September’s demonstration was part of a larger context in which migrants suffered acts of racism from officials, lack of appropriate mental health and medical care and often inedible, decomposing food, according to people who spent time at Stewart.

“Human rights truly do not exist,” the Guatemalan man and one of his friends wrote in a letter shared with NBC by the SPLC.

ICE said in a statement that it “provides safe, humane and appropriate conditions of confinement for individuals in its custody.”

Other immigrants have also shared testimonials describing what they say they endure at Stewart. The SPLC provided NBC with a redacted letter that dozens of detainees signed this fall.

“The despair is so much that many prefer to deport themselves to their countries (and) lose their lives in the hand(s) of criminal organizations, dictatorships and communism than be dying slowly in this prison,” the men wrote.

Two detainees have died in ICE’s custody since October, Cox confirmed, though he said that “fatalities in ICE custody are exceedingly rare.” One of the men, Roylan Hernandez-Diaz, had declared a hunger strike before he died of apparent suicide at a Louisiana facility, Buzzfeed News reported at the time.

Migrants at Stewart say there have been suicide attempts there, too, and detainees in New Mexico have started to self-harm as a message to ICE. Several people tried to slit their wrists at the Otero County Processing Center this fall, according to Brown Vega, the AVID volunteer. In a statement that her group made public, ICE acknowledged two attempts at self-harm by Cubans at Otero “in an effort to bring attention to their immigration cases” by  “scratching their wrists with their detention identification cards.”

Brown Vega told NBC that detainees at Otero have tried other forms of protest —  a sit-in, hunger strikes — but nothing happened.

“We are desperate,” asylum seekers wrote in a letter that AVID published. “We have already done several demonstrations such as hunger strikes, some of us have even tried to take our own lives.”

As people move between facilities, their experiences and tactics travel with them. The Santa Fe New Mexican recently reported that Cubans who were transferred from Otero to another detention center in New Mexico are continuing to hunger strike — for which they’re being punished with solitary confinement — and they’re now also threatening suicide.

A GAME OF CHANCE

Throughout the protests, migrants have been clear about what they want, and their messages often echo one another: They ask to be released and to appear in front of judges who they believe are fair.

At Stewart,  detainees wrote, “We want to be heard we feel helpless they have us as prisoners without exit help us please.” Similarly, asylum seekers at Otero asked for help “to finish our asylum process in liberty and with a court that respects the constitutional laws of the United States, a court where impartiality exists and where it’s just.”

Being detained also makes it more difficult to actually get asylum: According to a 2015 study published in the University of Pennsylvania Law Review, only 14% of detained migrants had a lawyer, compared to 66% of those who were not detained. Finding representation, the study claimed, makes migrants 5.5 times more likely to avoid deportation.

Meanwhile, the asylum decision process in the U.S. is arbitrary; some immigration judges grant asylum more than 90% of the time, while others deny it by that same high rate. One immigration judge in Louisiana denied asylum in all 144 cases she heard in recent years, according to TRAC.

In October, Eliober was granted asylum and released from ICE custody. The month before, his son Erisbel was removed to Cuba.

Rodriguez, who was also granted asylum, thought of the asylum seekers who had their petitions denied. Denials accounted for 65% of asylum decisions in fiscal year 2018, a record high for the last 18 years, TRAC data show.

“They deport us again, you know,” he said, “to a place where we aren’t free, where they violate all our rights. It’s pretty ugly.”