The militants overran the northern city in summer 2014, when the extremists seized territory across Iraq and Syria

Airstrikes, shelling and other heavy clashes shook a small sliver of western Mosul on Tuesday in renewed fighting, a day after the government declared victory over Islamic State militants in Iraq's second-largest city.

Amnesty International, meanwhile, proclaimed the battle for Mosul to be a "civilian catastrophe," with more than 5,800 noncombatants killed in the western part of the city. The top U.S. commander in Iraq rejected the group's allegations, however, that the U.S.-led coalition violated international law.

In a sign that ISIS militants were still holding out in the shattered Old City, plumes of smoke rose as mortar shells landed near Iraqi troop positions and heavy gunfire rang out. Airstrikes pounded the edge of the neighborhood west of the Tigris River throughout the day. 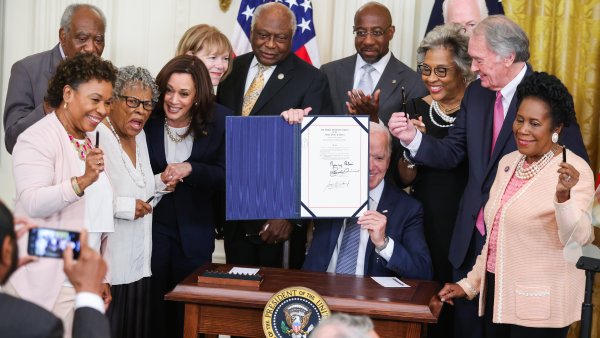 On Monday, Prime Minister Haider al-Abadi declared "total victory" in Mosul, flanked by his senior military leadership at a small base in the city's west.

The militants overran the northern city in summer 2014, when the extremists seized territory across Iraq and Syria. The campaign by Iraqi forces and the coalition to retake the city began in October 2016. The operation killed thousands of people, left whole neighborhoods in ruins and displaced nearly 900,000 from their homes.

A statement late Monday from ISIS said its fighters were still attacking Iraqi troops in the al-Maydan area of Mosul's Old City, purportedly killing and wounding many and seizing weapons and ammunition.

Lt. Gen. Stephen Townsend said in a recorded video after al-Abadi's declaration that the victory in Mosul did not eliminate ISIS from Iraq and "there's still a tough fight ahead."

Townsend, the top U.S. commander in Iraq, said the coalition will continue to support its Iraqi partners, and he urged Iraqis to unite and prevent a return of the conditions that allowed the rise of the extremists.

In Baghdad, Shiite politician Karim al-Nouri echoed those remarks, urging the government to review its policies in Sunni areas of Iraq to "avoid previous mistakes that led to the emergence" of ISIS.

The government needs to work on "removing fears of marginalization and terrorism affiliation in Sunni areas," said al-Nouri, a senior member of the Badr Organization. He said he believes Iraqi forces should stay in Mosul until it is fully secure before handing control to local forces.

Lawmaker Intisar al-Jabouri from Nineveh province, where Mosul is the capital, said uprooting ISIS' "extremism ideology" was the key to peace in Mosul, which reeled under the group's harsh rule for three years.

She urged Baghdad to invest in "good relations" between the residents and the security forces and take all "necessary measures to prevent terrorism groups from returning to Mosul."

In its report, Amnesty International alleged that all sides in the conflict violated international law in the battle for Mosul. ISIS fighters carried out forced displacement and summary killings, as well as using civilians as human shields.

Iraqi forces and the coalition failed to protect civilians, the report said.

In all, 5,805 civilians may have been killed in the fight for western Mosul by coalition attacks, Amnesty said, citing data from Airwars, an organization monitoring civilian deaths due to the coalition against ISIS in Iraq and Syria.

"The scale and gravity of the loss of civilian lives during the military operation to retake Mosul must immediately be publicly acknowledged at the highest levels of government in Iraq and states that are part of the U.S.-led coalition," said Lynn Maalouf, the research director for the Mideast at Amnesty.

The report, which covered the first five months of 2017, noted how the militants moved civilians with them around Mosul, prevented them from escaping and created battle spaces with dense civilian populations, while Iraqi forces and the coalition "failed to adapt their tactics."

The Iraqi forces and the coalition "continued to use imprecise, explosive weapons with wide area effects in densely populated urban environments," Amnesty said, adding that some violations might constitute war crimes.

At a briefing Tuesday in Washington, Townsend rejected the allegation that international law was violated by the coalition.

"I reject any notion that coalition fires were in any way imprecise, unlawful or excssively targeted civilians," he said.

"I would challenge the people from Amnesty International or anyone else out there who makes these charges to first research their facts and make sure they're speaking from a position of authority," Townsend added.

He said the coalition went to "extraordinary measures to safeguard civilian lives, measuring every single time how many civilians may or may not be in the target area and what munition to employ and how can we strike that building and take out only that room and not the entire floor or the entire building."

Zeid described Mosul's fall as the "turning point" in the conflict against ISIS, but warned that the group continues to subject people to "daily horrors" in its remaining strongholds of Tal Afar, west of Mosul, and in Hawijah, north of Baghdad.

"Horrific though the crimes of ISIL are, there is no place for vengeance," said Zeid, using another acronym for the Islamic State group.

He cited allegations of threats of collective punishment and forced evictions in Mosul by Iraqi security forces and their allies. He also cited three years of rights violations during ISIS' control of Mosul, including abuses like sexual slavery of women and girls that "have left deep scars on Iraqi society."

For more than two years before the Mosul operation began, Iraqi forces backed by coalition airstrikes slowly reclaimed territory that ISIS militants had seized as part of the group's self-described "caliphate."

Tens of thousands of Iraqi troops went through a coalition training program.