Wind a Risk as California Fires Keep Tens of Thousands Away

Crews tried to beat back two out-of-control wildfires in Southern California on Tuesday that have kept tens of thousands of people out of their homes even as another round of dangerous fire weather raises the risk for flames erupting across the state.

Fierce winds that drove twin fires through brushy hills near cities in Orange County a day earlier were expected to pick back up, although not to the earlier extremes, according to the National Weather Service.

Southern California Edison reported to regulators that it was investigating whether its equipment might have sparked the Silverado Fire near the city of Irvine. With utility equipment blamed for several destructive fires in recent years, Edison was among the utilities in California that deliberately cut power to customers to prevent equipment from being knocked down or hit with debris in the winds and sparking wildfires.

Irvine residents had to evacuate after a fire broke out early Monday, while later and a few miles away, another blaze, the Blue Ridge Fire, sent people fleeing from the Yorba Linda area. More than 90,000 people were under evacuation orders.

"If you are exposed for 12 hours of smoke in the air, then that is like 12 hours of continued smoking,” says Dr. Zab Mosenifar, a critical care pulmonologist at Cedars Sinai Medical Center.

One home was damaged and crews protected hundreds more as winds pushed flames down ridges toward neighborhoods. There was little containment of the fires.

Forecasts call for Santa Ana winds to keep blowing over much of Southern California, with some of the strongest gusts howling through Orange County, where the major blazes are. The winds were expected to be lighter than a day earlier and die down by nighttime.

The gusts were so strong Monday that they toppled several semi-trucks on highways and forced firefighters to ground their aircraft, though they got back up by late afternoon and were expected to fly Tuesday.

Two firefighters, one 26 and the other, 31, were critically injured while battling the larger blaze near Irvine, according to the county’s Fire Authority, which didn’t provide details on how the injuries occurred. They each suffered second- and third-degree burns over large portions of their bodies and were getting help breathing at a hospital, officials said. 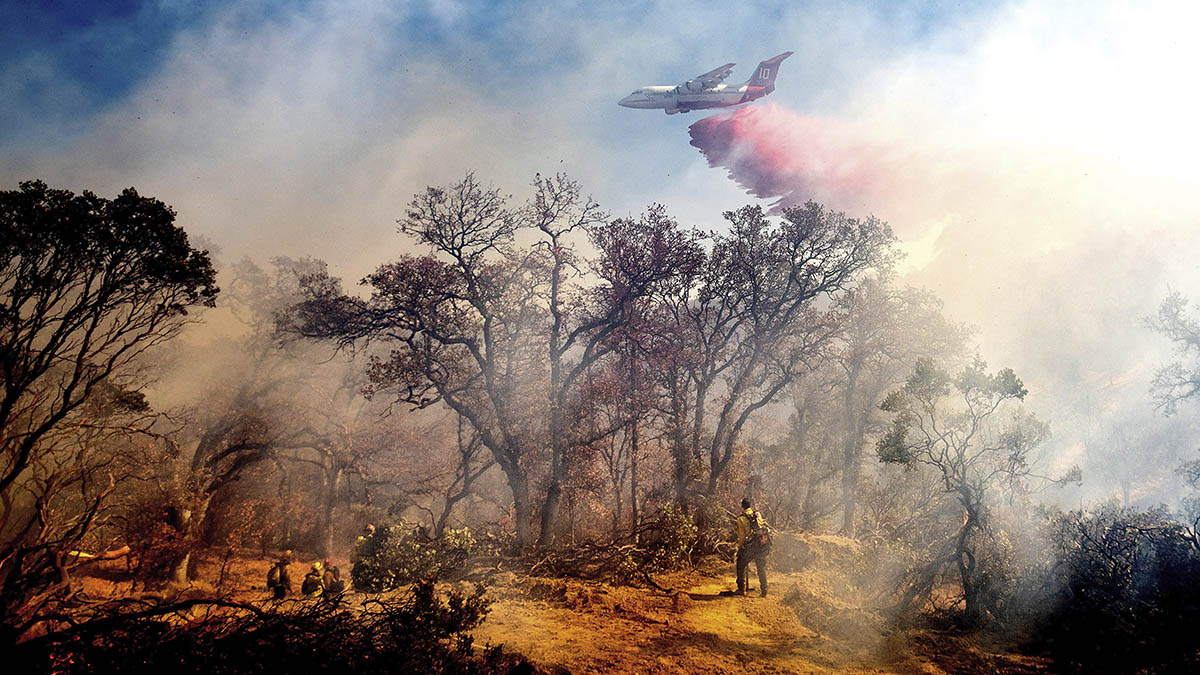 2 Firefighters Injured in Calif. Fire That May Have Been Started by Utility Equipment 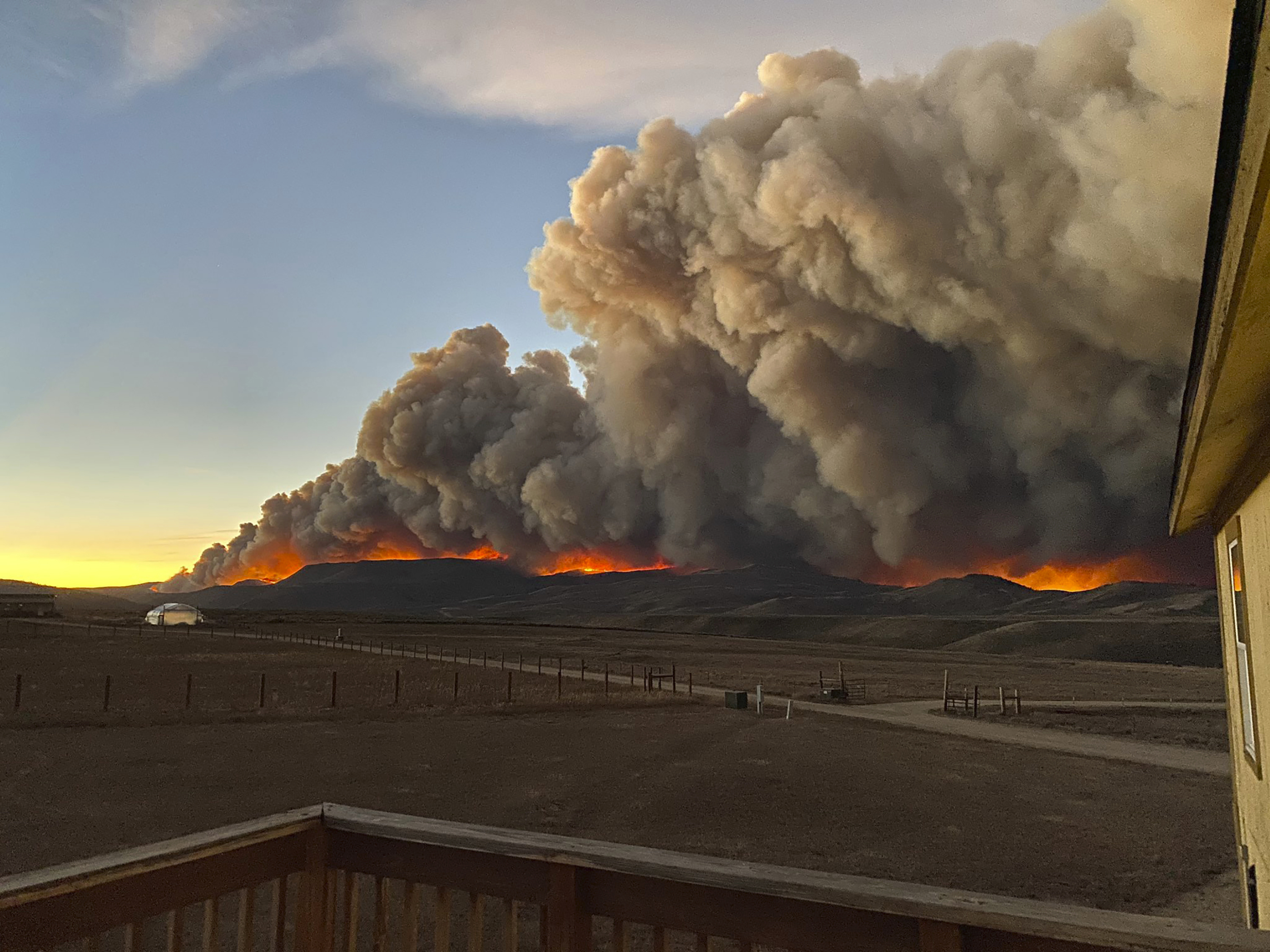 Ruth Anderson and her husband, Michael, grabbed medications and luggage as powerful winds whipped up in their Irvine neighborhood on Monday. They begged their neighbors to leave too, then drove off, only to find themselves in a traffic jam as orange smoke descended.

“You could hardly see in front of you,” she said. “You didn’t know if there was a wall of fire coming or not.”

Once safely at a friend's house a few cities over, “we made pumpkin martinis and tried to forget about life,” Anderson laughed.

Southern California Edison cut power to about 38,000 homes and businesses, although it restored some power by Monday night.

The devastating California wildfires have hit home for NBCLX's Tabitha Lipkin. Her grandfather, Robert Lipkin, lost his home to the fires. She interviews him about fleeing the fires and losing his home in "paradise."

At its peak, PG&E cut power to about 345,000 customers — an estimated 1 million people — in 34 counties. The nation's largest utility said it has restored power to more than 156,000 customers. Electricity is expected to come back at the remaining homes and buildings by Tuesday night after crews do inspections to make repairs and ensure equipment is safe.

A dozen reports of damage had been received, PG&E said.

Nearly two dozen wildfires were reported in Northern California on Sunday night and Monday but all were rapidly contained without serious damage.

The threat, however, was far from over in many parts of PG&E’s vast service area. A red-flag warning of extreme fire danger was in place Tuesday in the Santa Cruz Mountains near the San Francisco Bay Area and some coastal and valley areas, with warnings extending into Tuesday evening for some higher elevations in the Bay Area.

However, once the winds ease, the weather should remain calm through the weekend, Quinlan said.

Scientists have said climate change has made California much drier, meaning trees and other plants are more flammable. October and November are traditionally the worst months for fires, but already this year 8,600 wildfires in the state have scorched a record 6,400 square miles (16,600 square kilometers) and destroyed about 9,200 homes, businesses and other buildings. There have been 31 deaths.