Baker has continued to dodge questions about whether he will seek a third term, even as outside polling groups probe his chances against various Democrats

Massachusetts Gov. Charlie Baker will be hoping his supporters are in a giving mood on Tuesday night when he holds a pre-Thanksgiving fundraiser at Davio's in Boston's Seaport as he continues to raise campaign cash while deflecting questions about his political future.

Baker has continued to dodge questions about whether he will seek a third term, even as outside polling groups probe his chances against various Democrats.

The latest UMass Amherst/WCVB poll showed Baker leading Attorney General Maura Healey in a hypothetical matchup 33% to 27%, with 30% of residents surveyed undecided. Healey has also not yet announced whether she will run for governor, reelection or something else. Baker held considerably larger leads over the three Democrats already in the race.

More on the 2022 Governor's Election 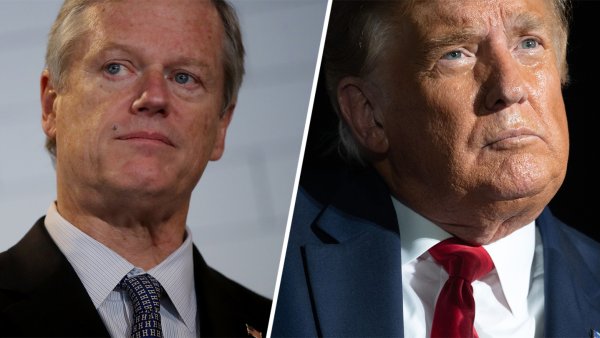 As Baker takes his time deciding on a possible third-term bid, the governor continues to fundraise for both himself and Lt. Gov. Karyn Polito, whose money could be used for another campaign with Baker or a run for governor on her own. Earlier this month, he headlined an event at the Ferncroft Country Club in Middleton.

The governor's October campaign finance report reflected $65,208 in contributions for the month, and a balance of $684,091. Baker is also consistently spending between $40,000 and $50,000 a month, mostly on staff salaries, health care and other operational expenses.

Whether Baker is raising money for his next campaign or just to keep the lights on, he has a new aide in charge of fundraising. Pamela Saad, a former campaign intern, has taken over for finance coordinator Ryan Del Mastro. Saad previously interned with the governor's finance and political teams between Sept. 2019 and April 2021. She earned her undergraduate degree this year from Suffolk University.

The number of candidates running for Massachusetts governor is growing, but Gov. Charlie Baker has not yet said if he will be one of them.
Copyright State House News Service