Popular legislation to expand voting rights, raise the minimum wage to $15 an hour and develop the president’s “Build Back Better” infrastructure package are all on deck this spring and into summer

Tough as it was for Democrats, passing President Joe Biden’s sweeping $1.9 trillion COVID-19 rescue package into law was the easy part.

Now, they are hunkering down to push the next priorities in Biden’s agenda forward past what, so far, has been a wall of entrenched Republican opposition in the so-very-split Congress. It's likely to be a long slog.

Popular legislation to expand voting rights, raise the minimum wage to $15 an hour and develop the president’s “Build Back Better” infrastructure package are all on deck this spring and into summer. But unlike the relatively quick passage of the American Rescue Plan, halfway through the president's first 100 days, sending the next measures to Biden's desk is expected to take many months. Democrats are even considering changing historic filibuster rules to overcome opponents and speed the bills along.

President Joe Biden on Thursday announced a plan to make all adult Americans eligible for a COVID-19 vaccine by May 1. He also said there is a “good chance” people from different households will be able to gather by July 4.

“It will take time to put all the pieces together,” said Sen. Debbie Stabenow, D-Mich., a member of party leadership.

Biden’s signing of the American Rescue Plan on Thursday marks a milestone for his administration and for Democrats who have command of the House, Senate and White House for the first time in a decade. From party leaders to rank-and-file lawmakers, the Democrats are buoyed by what they can accomplish when they hold together, as a united front, against the GOP opposition to Biden’s agenda. But the weeks and months ahead will prove more politically challenging.

Democrats face mounting pressure from within their centrist ranks to try harder to win support from Republicans, especially on the coming infrastructure bill — a multitrillion-dollar investment in roads, bridges, ports and broadband that could be even bigger than the just-signed coronavirus rescue package.

At the same time, the progressive flank is eager to waste no time and take more dramatic steps, including changing the Senate's 60-vote margin required by filibuster rules, if needed, to leave Biden’s opponents behind.

President Joe Biden on Thursday denounced the “vicious hate crimes” against Asian Americans across the country. “[They’ve been] attacked, harassed, blamed and scapegoated,” Biden said. “It’s wrong, it’s un-American, and it must stop.”

“We need a big bold agenda, just like we passed,” Schumer said this week, vowing to "do everything we can to get that bold agenda done.”

If Republicans “won't join us in that,” he said, "our Congress is going to come together and figure out next steps.”

The next big test will come quickly, even before the big infrastructure bill is fully formed.

The House is rapidly sending the 50-50 split Senate a series of bills that many Americans support — to expand voting rights, raise the federal minimum wage to $15 an hour and expand background checks for gun purchases. 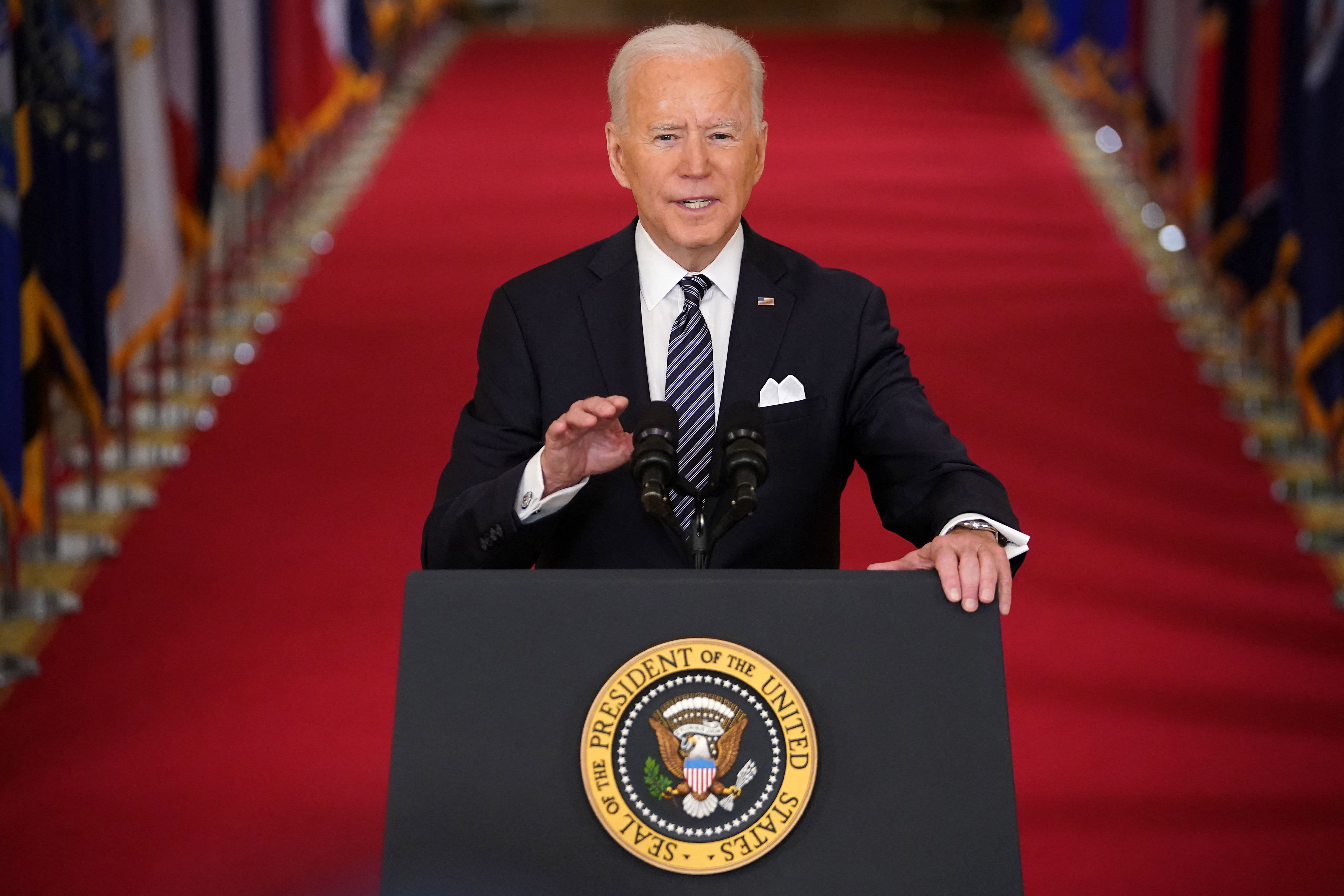 Democrats are set to use those bills as test drives to assess Republican attitudes. If Senate Republicans start blocking the legislation, Democrats are prepared to force them into long days and nights of dramatic floor filibusters, like the movie version in “Mr. Smith Goes to Washington.”

Sen. Joe Manchin of West Virginia opened the door to forcing opponents to stand and make their case in the so-called “talking filibuster” — to feel some pain, as he put it — if they want to block a bill.

Manchin has been among the most outspoken Democratic opponents of doing away with the filibuster, but he is not alone. While it takes 60 votes to overcome a filibuster on legislation, a tall order in the evenly split Senate that would require at least 10 votes from Republicans, it also takes 50 votes to change the Senate's rules. As many as 10 other Democrats are also hesitant to eliminate the tool.

The filibuster gives the minority enormous ability to halt action, and Senate Democrats used it plenty of times when they were out of power. But filibuster opponents say it has been abused over the years, particularly as a mid-century tool to delay civil rights legislation, and call it a historically racist tool that affords the minority too much power over the majority.

The federal minimum wage is just $7.25 per hour. And President Trump and Joe Biden agree on one thing — that’s not a lot of money to live on. But they don’t agree on what to do about it. You think you know which side you support? It’s more complicated than you think.

"There’s lots of ways we can test that the next couple of months," said Sen. Chris Murphy, D-Conn.

The House bills headed to the Senate are largely do-overs that stalled in the last session of Congress. At the time, Republican Sen. Mitch McConnell, then the majority leader, relished his role as the “grim reaper” presiding over the Senate’s “graveyard” of House Democratic bills.

In the weeks and months ahead, some Republicans will likely happily seize the opportunity to give lengthy floor speeches against bills they oppose — as Sen. Ted Cruz, R-Texas, once did, reading Dr. Seuss’ “Green Eggs and Ham” to his then-young daughters who were watching on television from home.

Many lawmakers fundraise off such efforts, raising vast small-dollar donations.

“If in a 50-50 Senate, we’re stumped on basic legislation by the filibuster, it’s just a reminder that McConnell’s approach of legislative graveyard is going to prevail,” Sen. Dick Durbin, the majority whip, told reporters on the Hill. “And I think members are fed up with it.”

The outcome of the debates ahead will set the stage for Biden’s next big effort, the sweeping “Build Back Better” infrastructure plan that’s already taking shape in public committee hearings and private conversations on and off Capitol Hill. Along with the infrastructure investment, it could include vast new policy changes — on green energy and immigration — and even make some of the just-passed COVID assistance like child tax credits permanent.

House Budget Committee Chairman John Yarmuth, D-Ky., said he expects it to roll out by the end of summer or possibly in the fall.

Still, Biden's infrastructure package may be one bill that could win over Republican support. Road- and bridge-building legislation has a long history of bipartisan support from lawmakers who need to deliver investments back home. If the House and Senate allow lawmakers to request earmarked funds for specific needs, a topic also under discussion, that could also boost backing.

But the bill is likely to be vast, and the other provisions on climate change or immigration may drive Republicans away. McConnell has warned Democrats off the go-it-alone strategy.

Doubting bipartisanship will emerge, there is growing support among Democratic senators to do away with the filibuster if Republicans use it to block Biden's bills.

“If Mitch McConnell continues to be totally an obstructionist, and he wants to use the 60 votes to stymie everything that President Biden wants to do and that the Democrats want to do, that will actually help people" by making it clear that Democrats will need to get rid of the filibuster, said Sen. Mazie Hirono, D-Hawaii.

“We may not be quite there yet,” said the senator, whose own views have shifted to now favoring eliminating the tool. “I am.”