"Two commissioners of the 18-member California Parole Board made a grievous error last Friday in recommending the release of the man who murdered my father," Joe Kennedy II said in a statement Sunday

Former Congressman Joe Kennedy II says a "grievous error" has been made after the California parole board recommended Robert F. Kennedy's assassin be released from prison.

The decision Friday from a two-person board panel came after two of RFK's other sons — Douglas Kennedy and Robert F. Kennedy Jr. — said they support releasing Sirhan Sirhan, and prosecutors declined to argue he should be kept behind bars.

Sirhan smiled, thanked the board and gave a thumbs-up after the board's decision was announced. It was a major victory in his 16th attempt at parole, but it does not assure his release. The decision will be reviewed by the full parole board for 120 days before it is final, and California's governor will ultimately decide if Sirhan, 77, leaves prison.

"I understand that there are differing views about ending the sentence of this killer, including within my own family. But emotions and opinions do not change facts or history," Kennedy said in a statement Sunday. "The prisoner killed my father because of his support of Israel. The man was tried, convicted and sentenced to death. Yet he now may walk free, no doubt to the cheers of those who share his views. Let there be no mistake, the prisoner’s release will be celebrated by those who believe that political disagreements can be solved by a gun."

Sirhan's lawyer, Angela Berry, said the board should base its decision on who Sirhan is today and not what he did more than 50 years ago. She said he is not a threat to the public. Sirhan said he had learned to control his anger and was committed to living peacefully.

"I would never put myself in jeopardy again,'' he told the panel. "You have my pledge. I will always look to safety and peace and non-violence.''

Sirhan, a Christian Palestinian from Jordan, has acknowledged he was angry at Kennedy for his support of Israel. When asked about how he feels about the Middle East conflict today, Sirhan broke down crying and temporarily couldn't speak.

Sirhan said he doesn't follow what's going on in the region but thinks about the suffering of refugees.

"The misery that those people are experiencing. It's painful,'' Sirhan said.

If released, Sirhan could be deported to Jordan, and Parole Board Commissioner Robert Barton said he was concerned Sirhan might become a "symbol or lightning rod to foment more violence.''

Sirhan said he was too old to be involved in the Middle East conflict and would detach himself from it.

This week marks what would have been the 60th birthday of John F. Kennedy Jr., who died in a plane crash 21 years ago.

The ruling will be reviewed over the next four months by the board's staff. Then it will be sent to the governor, who will have 30 days to decide whether to grant it, reverse it or modify it.

Kennedy, who currently serves as chairman of Citizens Energy Corporation in Boston, said he hopes the full parole board will reverse the decision over the ongoing review period and that the California governor, if faced with the choice to release Sirhan, will keep him in prison to serve out his full life sentence.

"The murderer of anyone who runs for or holds public office because of his political stance must know that he will at a minimum spend life in prison without parole," Kennedy said.

Robert F. Kennedy was a a U.S. senator from New York and the brother of President John F. Kennedy, who was assassinated in 1963. RFK was seeking the Democratic presidential nomination when he was gunned down at the Ambassador Hotel in Los Angeles moments after delivering a victory speech in the pivotal California primary. Five others were wounded.

Sirhan, who insists he doesn't remember the shooting and had been drinking alcohol just beforehand, was convicted of first-degree murder. He was sentenced to death after his conviction, but that sentence was commuted to life when the California Supreme Court briefly outlawed capital punishment in 1972. At his last parole hearing in 2016, commissioners concluded after more than three hours of intense testimony that Sirhan did not show adequate remorse or understand the enormity of his crime. RFK Assassin Sirhan B. Sirhan Recommended for Parole, but Decision Not Final 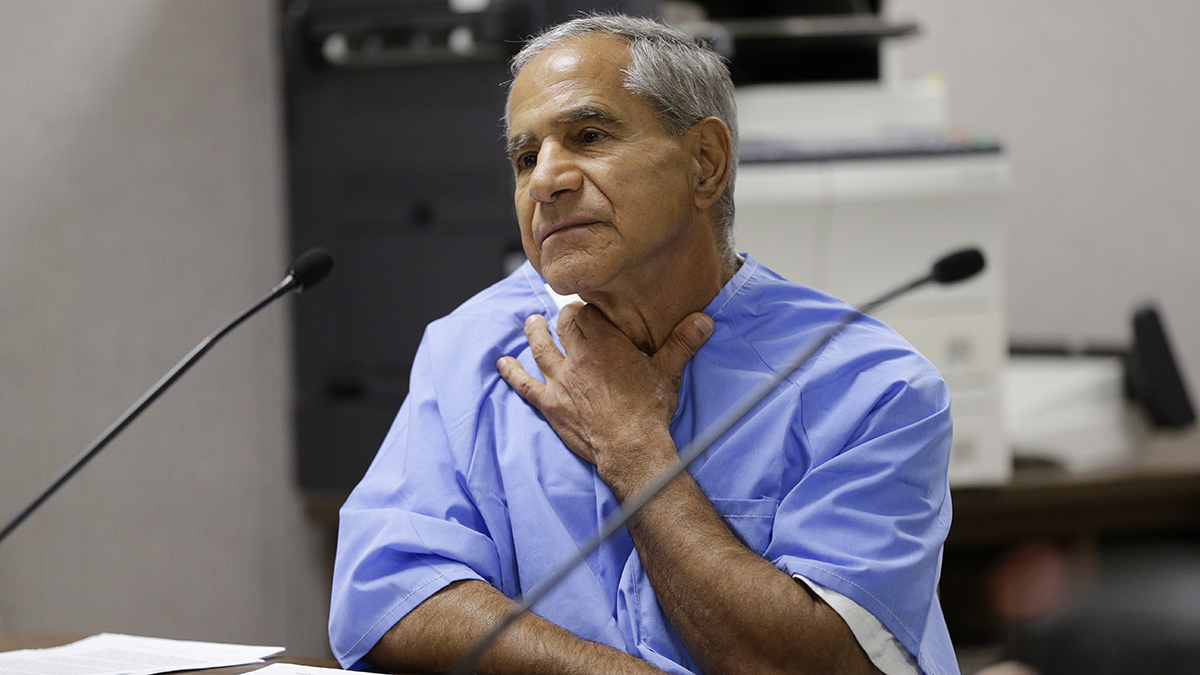 "My family understands that most Americans view the murder of my father as an important moment in the history of our country," Kennedy said. "For those of us who called him Daddy, it is far more than the thousands of times we’ve watched our father get killed on television. Every one of us."

"The prisoner left a pregnant mother of ten without a husband and soon-to-be 11 children without a father," Kennedy continued.

Kennedy noted that Sirhan has already received a "demonstration of mercy" when his death sentence was reduced to life imprisonment.

"No one should have the right to alter the lesser sentence requested by the person most affected by my father’s death – his wife, whose last child would never know a father’s touch. Nothing written, said or done will ever change that reality," Kennedy said. "We miss him every moment of every day, and struggle to understand why the prisoner should be able to enjoy the golden years of his life when he so viciously stole them from our father. There is no justice in that."

If Sirhan is freed, he must live in a transitional home for six months, enroll in an alcohol abuse program and get therapy.