The projected result brings at least some clarity to a contest that has so far been marred by dysfunction and doubt. Sanders narrowly edged out former Midwestern Mayor Pete Buttigieg, with Sen. Amy Klobuchar of Minnesota trailing behind them in the tally.

"This victory here is the beginning of the end for Donald Trump," Sanders said, predicting victory in the upcoming contests in Nevada and South Carolina.

Hear from the top-four finishers from Tuesday’s Democratic Primary in New Hampshire. Sen. Bernie Sanders, I-Vt., is the projected winner, according to NBC News, while entrepreneur Andrew Yang and Sen. Michael Bennet, D-Colo., exited the race.

Joe Biden and Sen. Elizabeth Warren, who had each led the polls in New Hampshire last year, crashed out of contention in New Hampshire by Tuesday night — they were not projected to have received enough votes to take away any party delegates, leaving them with a longer path to the nomination.

Meanwhile, two Democrats dropped out of the race, winnowing a field that was in the double digits.

Entrepreneur Andrew Yang announced Tuesday night he was suspending his campaign for the presidency. "I am the math guy, and it is clear tonight from the numbers that we are not going to win this race," Yang said shortly before the polls closed in New Hampshire Tuesday.

Regardless of who comes out on top, Sanders and Buttigieg may both be able to celebrate a top-two finish — no Democrat has ever become the party's presidential nominee in the modern era without finishing first or second in New Hampshire.

Last week, the same two candidates topped the Iowa caucuses, which had failed to report a clear winner and threw the Democratic race into disarray.

NBC News' projection of Sanders' victory in New Hampshire came as Buttigieg was speaking at his campaign party, where he was complimentary of the other Democrats in the race, all of whom are "on the same team," he said.

"Here in a state that goes by the motto of 'Live free or die,' you made up your own minds," Buttigieg said. "You asserted that famous independent streak, and thanks to you, a campaign that some said shouldn't be here at all has shown that we are here to stay."

Klobuchar's apparent lock on third place was a major surprise on the night, when weeks ago former Vice President Joe Biden or Sen. Elizabeth Warren, of neighboring Massachusetts, would have seemed the likelier choice.

The returns showed Klobuchar capitalizing on a late surge to finish strong — she wasn't in the top five of the last NBC10 Boston/Franklin Pierce University/Boston Herald poll of likely New Hampshire primary voters.

Warren came in third in that poll, but was ultimately unable to reverse a dip in her support in the last days of campaigning.

"Our campaign is built for the long haul and we are just getting started," Warren said, the first major candidate to speak to supporters Tuesday night.

Biden wasn't even in the state when the results began pouring in. While the former vice president said Tuesday afternoon that he was "mildly hopeful" about the results, he fled hours before polls closed, which votes at the end of the month.

Having already predicted he would "take a hit" in New Hampshire after a distant fourth-place finish in Iowa, Biden was essentially ceding the state. He traveled to South Carolina Tuesday as he bet his candidacy on a strong showing there later this month boosted by support from black voters.

Biden's campaign said he would attend a campaign launch party in South Carolina.

At a rally in South Carolina, Biden insisted that the party's nominee will need "overwhelming support from black and brown voters."

Trump, paying no mind to a primary challenge from former Massachusetts Gov. Bill Weld, had stopped into the state Monday evening to inject chaos into the Democrats' process at a raucous rally. He kept it up Tuesday night commenting on Twitter on the state of the race.

His supporters said Tuesday that they wanted to show support for their president to give his campaign a boost for the general election in November.

The Democrats are all trying to prove they're the best candidates to beat President Donald Trump. But there is still plenty of support for the commander in chief.

New Hampshire did begin culling the Democrats' unwieldy 2020 class, which featured at the start of the day about a dozen candidates battling for the chance to take on Trump in this fall's general election.

But while Yang and Bennet slimmed the field, other candidates who haven't picked up a great deal of support vowed to fight on, including California billionaire Tom Steyer and Rep. Tulsi Gabbard of Hawaii. Gabbard had made the third-most campaign stops in New Hampshire this cycle, behind only Weld and Yang, according to NECN's candidate tracker.

Weld, the former governor of Massachusetts, is the only major Republican remaining on the ballot, after two others dropped out in recent days.

The New Hampshire vote made clear that the early days of the Democratic contest will be a battle largely between two men who are four decades apart in age and are ideological opposites.

Sanders is a leading progressive voice, calling for a substantial government intervention in health care and other sectors of the economy. Buttigieg, the 38-year-old former mayor of South Bend, Indiana, has pressed for more incremental changes, giving Americans the option of retaining their private health insurance and making a point of appealing to Republicans and independents who may be dissatisfied with Trump.

Yet Sanders and Buttigieg enter the next phase of the campaign in different political positions.

While Warren made clear she will remain in the race, Sanders, well-financed and with an ardent army of supporters, is quickly becoming the leader of the progressive wing of the party. 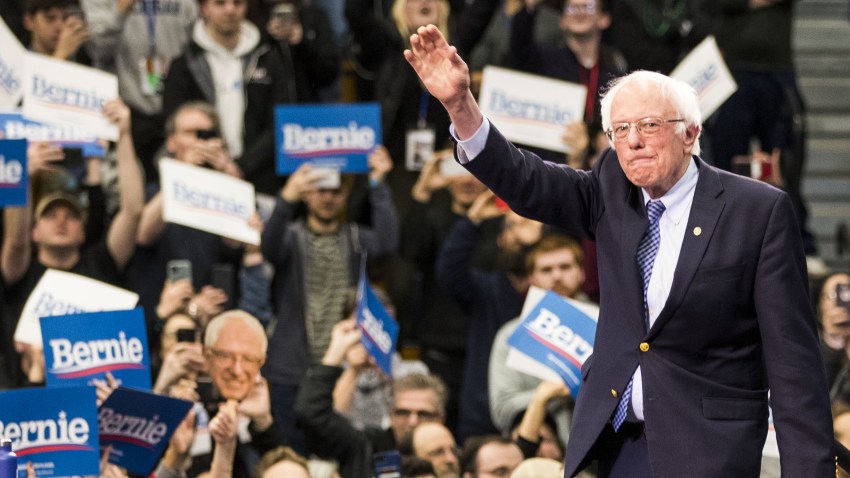 What’s Happened to Warren, Biden? Dismal Showings and Questions About the Future

Meanwhile, Buttigieg still has moderate rivals to contend with, including Klobuchar, whose standout debate performance led to a late surge in New Hampshire. Biden promises strength in upcoming South Carolina, while former New York Mayor Mike Bloomberg was not on Tuesday's ballot but looms next month.

New Hampshire voters appear to be largely uninfluenced by meet-and-greet campaign stops. Research has previously cast doubts on the effectiveness of small-scale visits, finding voters tend to not know or care about them.

More than a year after Democrats began announcing their presidential candidacies, the party is struggling to coalesce behind a message or a messenger in its desperate quest to defeat Trump. That raised the stakes of the New Hampshire primary as voters weighed whether candidates were too liberal, too moderate or too inexperienced — vulnerabilities that could play to Trump's advantage in the fall.

PHOTOS: Scenes from the NH Primary

During the final day of campaigning, many voters said they still hadn’t made a final choice. University of New Hampshire pollster Andy Smith predicted that as many as 20% of voters would make up their mind on Election Day with twice as many deciding over the last three days.

"Historically, New Hampshire is known to shift late,” he warned those with expectations.

Many of the candidates in the Granite State are successfully converting dollars into support and vice versa.

Democrats were closely monitoring how many people showed up for Tuesday's contest. New Hampshire's secretary of state predicated record-high turnout, but if that failed to materialize, Democrats would confront the prospect of waning enthusiasm following a relatively weak showing in Iowa last week and Trump's rising poll numbers.

At least not for Tom Steyer. Social media reach in New Hampshire isn't translating into a comparable boost for the candidates.

Bloomberg won the vote of the first town that reported, Dixville Notch. That likely didn't have much bearing on the primary overall, as the town only has five registered voters.