Tiebreakers are the only thing which have prevented the Patriots from being AFC East champions 19 times running.

New England went 9-7 in 2002, one year after its first Super Bowl title, same as the Jets. But Gang Green owned a better winning percentage against common opponents than the Patriots, spoiling Gillette Stadium's rookie season.

The 2008 Patriots finished 11-5, tied atop the AFC East with the Dolphins. But Miami had a better winning percentage against the AFC than New England did, same as the 11-5 Ravens, who nabbed the conference's final wild-card berth.

Why bring this up now? You know why.

Tom Brady's departure for Tampa Bay has brought about a power vacuum in the division, let alone the AFC as a whole. Sure, New England didn't win the conference last year, but the team has still played in the AFC title game 13 times in the last 19 seasons.

Sans Brady, the Patriots are no longer among the favorites to emerge from the AFC. No more "Tomato Can" divisional playoff games on Saturday night in Foxboro. No more perusing hotel options in Houston, Atlanta, New Orleans or wherever the Super Bowl is next set to be contested months ahead of time.

The matter of who remains the favorite within the division isn't as doom and gloom, yet it may all rest on the arm of a single player.

The Jets, Dolphins and even Bills -- despite two playoff appearances in the last three years -- remain flawed teams. One thing they all possess, however, is a glimmer of hope in young quarterbacks they hope develop into franchise cornerstones.

It's not as though we haven't seen this story before. The Jets tried and failed with Mark Sanchez and Geno Smith, the Dolphins got nowhere with Ryan Tannehill, and the Bills came up short with JP Losman, Trent Edwards and EJ Manuel. Those quarterbacks were doomed to fail amid circumstances far beyond the presence of Brady and the Patriots within the same division, on the schedule twice a year. Mostly, they just weren't very good.

What Sam Darnold, Josh Allen and, now, Tua Tagovailoa have in common for the Jets, Bills and Dolphins, respectively, is that they're now growing up in a world in which the playing field, presumably, will be a whole lot more level.

Unless, of course, the Patriots struck gold with Jarrett Stidham as their own quarterback of the future.

New England won the AFC East by an average of three games over the last 10 seasons. Only the 2015 Jets and 2019 Bills got within two games even.

Those days are likely over, for now. But with the infrastructure the Patriots still have in place without Brady (see: Belichick, Bill), don't go crowning a new divisional champ just yet.

Miami may not even hand the keys to Tua right away, even after splurging in free agency for, among other pieces, former Patriot Kyle Van Noy. Buffalo acquired Stefon Diggs to help out Allen, who's arguably the only piece holding the Bills back, and the Jets, if nothing else, can hold out hope that Darnold's (very) slight improvement from Year 1 to Year 2 is a precursor to a breakout Year 3.

Even if Stidham is merely average -- think Matt Cassel in 2008 -- there's still the potential for another gap between the Patriots and the rest of the division. But there's also reason to worry.

What Cassel had in 2008, the season Brady injured his ACL in Week 1, was the remnants of a team that won 18 games the year before. Stidham inherits a team that somehow lost to the Dolphins at home in Week 17.

For all we know, that loss to Miami could have signaled the changing of the guard. Ryan Fitzpatrick slicing and dicing his way through a paper tiger defense in the final minutes to relegate the Patriots to wild-card weekend would be one whimper of a final act.

Stidham's progress could ensure there's not just a worthy epilogue of Brady's reign, he could earn himself something of a sequel.

For better or for worse, one of the most intriguing storylines of the 2020 NFL season will be every move of Stidham's in New England. Every throw he makes will be under a microscope like never before as the guy who's replacing Tom Brady. Every mistake he makes will quickly have you glancing at the score of Buccaneers games.

Every time he succeeds makes it that much more likely, however, that the AFC East will, in fact, remain the Patriots' playground. The gap between the four teams is closer than its been since, well, the last time New England played the majority of a season without Tom Brady.

Fair or unfair, Stidham is on the clock. Who Won the 2020 Draft? Jarrett Stidham 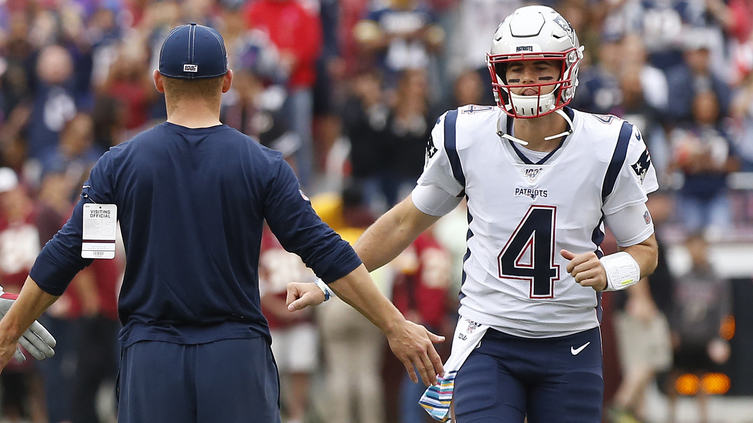