Game 2 of the best-of-seven series being played in Toronto is Tuesday.

Jaroslav Halak stopped 35 shots to win his fourth straight game since starter Tuukka Rask opted out of the playoffs, and the Boston Bruins beat the Tampa Bay Lightning 3-2 to open their second-round series on Sunday night.

Charlie Coyle tipped in Brandon Carlo's point shot to open the scoring. David Pastrnak and Brad Marchand had a goal and assist apiece for the Bruins, who are suddenly resembling the team that led the NHL with 100 points and 44 wins in the regular season.

The 35-year-old Halak became the Bruins fourth goalie 35 or older to win four or more straight postseason games and first since Tim Thomas won five in a row in 2009.

Victor Hedman scored for the Lightning, with both goals coming in the final 11:10 of the game and after Tampa Bay fell behind 3-0. Both goals came on shots from just inside the blue line that tipped in off Boston's Charlie McAvoy in front.

Tampa Bay goalie Andrei Vasilevskiy stopped 28 shots in a game that was supposed to feature a match up of two of the three Vezina Trophy finalists before Rask abruptly opted out to be with his family on Aug. 15. Vasilevskiy set a franchise record in making his 37th career playoff start, one more than Ben Bishop.

Game 2 of the best-of-seven series being played in Toronto is Tuesday. 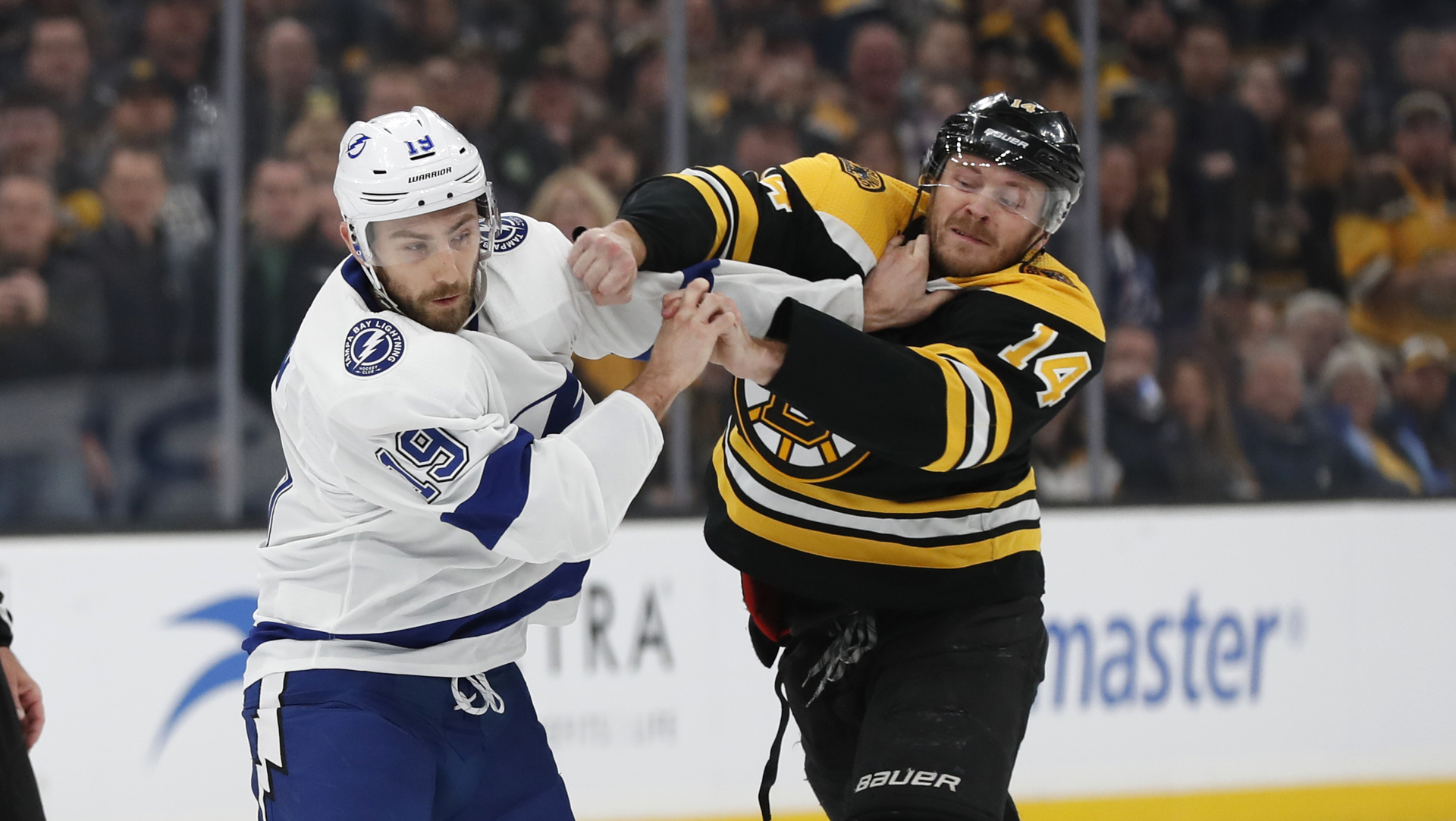 Bruins Vs. Lightning: Which Team Has the Edge in NHL Playoff Series? 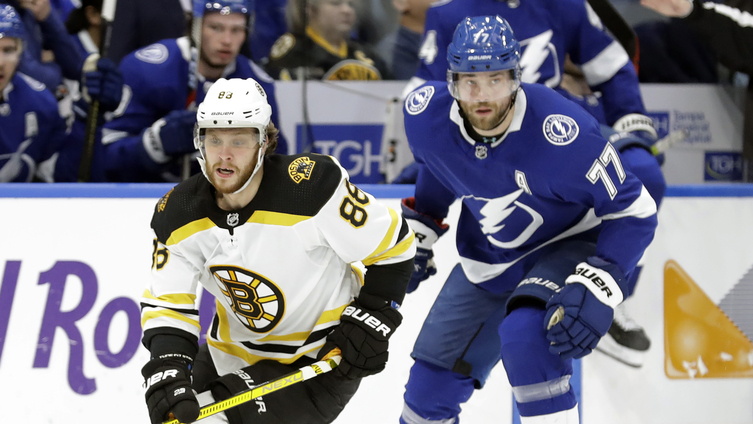 The roles were reversed in a meeting of Atlantic Division rivals and the NHL's top offensive and defensive teams. With 243 goals scored, Tampa Bay led the league in scoring for a third straight year, while the Bruins allowed a league-low 167.

Coyle opened the scoring with 68 seconds left in the first period, when he was parked in the right circle and deflected in Brandon Carlo's shot from the point over Vasilevskiy's right shoulder. Carlo's shot otherwise appeared to be sailing wide of the net.

The Bruins went up 2-0 at the 4:34 mark of the second period, and with Hedman off for tripping. David Krejci patiently skated the puck up the right boards before threading a pass through the middle to Pastrnak, who one-timed it in under Vasilevskiy's blocker. With the assist, Krejci extended his point streak to seven games in which he has combined for three goals and seven assists.

Marchand then sealed the win, scoring 1:17 into the third period, and set up on a play that began with teammate Patrice Bergeron stripping Ryan McDonagh of the puck from behind in the Lightning zone.

Halak was particularly sharp in the second period when the Bruins were outshot 18-7. His best save came with about four minutes left in the period, when he managed to get a piece of his glove on the puck to foil Barclay Goodrow, who was set up alone to the right of the net.

Tampa Bay's Alex Killorn had a goal immediately waved off midway through the second period. He scored after teammate Tyler Johnson had his stick well over his shoulders in batting down a rebound into the slot.

Both teams had three full days of rest after completing their first-round series in five games Wednesday. The second-seeded Lightning eliminated Columbus with a 5-4 overtime win, while the fourth-seeded Bruins eliminated Carolina with a 2-1 victory.

The President's Trophy-winning Bruins got off to a sluggish start to the playoffs by dropping all three preliminary round-robin seeding games, including a 3-2 loss to Tampa Bay, and then splitting their first two games against Carolina. Boston has since won four straight -- the team's best playoff streak since an 8-0 run, which included the Bruins four-game sweep of Carolina in the Eastern Conference finals.

NOTES: Brayden Point led the Lightning with seven points (three goals, four assists) in their 2018 five-game second-round series win over Bruins. ... D Zdeno Chara appeared in his 146th playoff game with Boston, moving ahead of Wayne Cashman for second on franchise list. Ray Bourque is first with 180. ... The Bruins announced during the first intermission signing now playoff backup goalie Dan Vladar to a three-year, $2.25 million contract extension. ... Gerry Cheevers was 35 or older when he won four or more consecutive playoff games on three separate occasions, and Eddie Johnston had a six-game run in 1972.