Mr. Belichick, it is your turn for rebuttal. You have seven months beginnnnninggggg ... now.

We’re at the dawn of the Patriots' 2021 season. Bill Belichick speaks Tuesday. Training camp opens Wednesday. Fans can hang on the hills and singe their fannies on the metal bleachers surrounding the Patriots practice fields at Gillette Stadium once again. 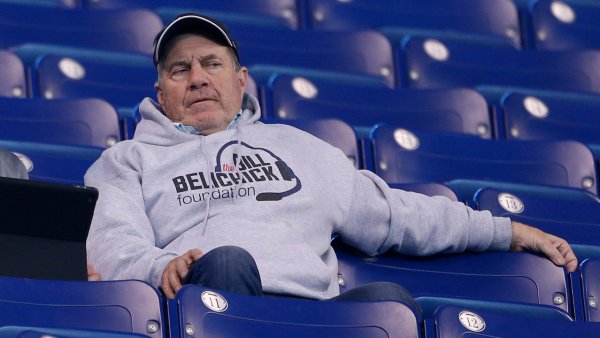 The hop that went missing from the step of New England during Tom Brady’s End of Days is back. The angst that rode shotgun to success from the summer of 2017 until St. Patrick’s Day 2020 when Brady said he was moving on is mostly washed away.

Related: Brady opens up about 'mystery team' that passed on him

A fleet of well-compensated free agents are signed up. A bunch of opt-outs have returned. There’s a first-round quarterback who just might be a plug-and-play option. The team is out of cap jail. The “nobody believed in us” chip is in place on the collective shoulder.

Little Baby Dynasty 3.0 is gurgling happily and blinking up at the world. Now we’ll really see what Bill Belichick’s post-Brady Patriots are all about. Now, it will be a fair fight.

What happens next matters a lot.

The Patriots aren’t just some team trying to get right after dipping below .500 last year. They are historic. The greatest dynasty in NFL history which -- for a 20-year stretch -- had the combined services of the greatest coach and quarterback.

In 2099, when I’m 133 and writing a retrospective of the 21st century’s greatest players, coaches and franchises, I am confident Brady, Belichick and the 2000-20 Patriots will still be at the top.

But right now, we are watching in real-time what happens at the end. Already, the script defies belief.

Brady finally walked through the door Belichick held open for him for half-a-decade, ended up in swampy Tampa and won a Super Bowl.

The Patriots fielded a team with the best punter in the league, low-level wideouts, no tight ends and a quarterback who can’t throw so good and staggered around a pandemic-blemished season.

Brady -- for now -- appears to have dropped the mic on the “Tom or Bill ...” discussion. Meanwhile, Robert Kraft, after being told that hard-lining Brady on an extension from 2017 through 2019 was the way to go, has to be feeling like this ...

Now, with his newly-minted team, Belichick can begin his reply.

There is no mistaking that this reboot is what Belichick chose. And he’s approached it with a “Give me the ball and get out of my way ...” intensity.

Before free agency opened, the Patriots let it be known they’d reached agreement with eight free agents on contracts with a total value close to $240 million. They guaranteed more than $170M for those free agents, as much as Kraft spent to buy the team.

In recent seasons, Belichick would make a point to say Nick Caserio was conducting the free agency train. Not this year. Belichick ran point on all of it.

And as the draft approached, sources told me about a different and more collaborative approach going on in Foxboro. The haul from that is headlined by Mac Jones, who’s already ignited big optimism.

This is what Bill wanted. Even if we could hit him with the truth serum and ask whether he regrets not giving Brady the two-year, $50M, all-guaranteed deal Brady was asking for heading into 2019, I’d bet Belichick would answer, “Not a bit.”

He doesn’t have an aging, expensive, high-maintenance quarterback to deal with. And it’s not like the Patriots would have won the Super Bowl last year with Brady. They might not have won the AFC East.

Belichick is right where he wants to be. Right where he hoped to be when he spoke to Charlie Weis last November about the team having “sold out” for its late-decade success.

“I mean, it’s obvious that we didn’t have any money,” Belichick told WEEI’s "OMF" show last year. “It’s nobody’s fault. That’s what we did the last five years. We sold out and won three Super Bowls, played in a fourth and played in an AFC Championship Game. This year we had less to work with. It’s not an excuse, it’s just a fact."

The fact now? Belichick got to purchase this roster because of a confluence of two main circumstances: A falling salary cap because of the pandemic and a crap ton of cap space cleared during the 2020 season.

There’s a line of thought that, while Brady got to parachute into a great situation, Belichick was left to clean up empties and mop the floor after a two-decade party. As a result, he can’t be judged on what happened last year.

That’s an oversimplification. The Bucs were obviously stacked, and replacing 30-pick Jameis Winston with Brady was going to help a 7-9 team. But very, very few thought Brady was still capable of doing what he did. Belichick included.

Brady wasn’t washed in 2019 during that forgettable final season in Foxboro. He was tethered to an embarrassingly low level of skill-position talent. When he had better players around him in 2020 -- tah dah! -- he played better. Why did he have better players around him? The Bucs built a better team in the late-2010s than Belichick did in New England.

That’s clear now. If Brady went to Tampa and went 8-8 or 10-6, maybe it wouldn’t be. But for him to succeed so spectacularly absolutely upped the ante on Belichick.

Consider how many times Kraft said he never wanted Brady to play anywhere else. Consider what it took for the owner to stand aside and let Belichick do what was best for his football team.

Now consider Kraft -- in the span of two months -- watching Brady win the Super Bowl and Belichick spend almost a quarter-billion in contracts to rebuild the team. While every once in a while, glancing an ownerly eye over to San Francisco where Jimmy Garoppolo -- the would-be Brady successor -- was proving to be perhaps the worst investment in football. That’s not going to warm an 80-year-old owner’s heart.

Does Belichick lose a half-second of sleep over that? I don’t know. What I do know is that, while Belichick might not have perfectly set himself-up for immediate post-Brady success, he’s done it now.

The entire 2021 season will be Bill Belichick’s rebuttal.