What's the Path Forward for These Confounding 2021-22 Celtics?

Forsberg: The middle of the road path forward for these Celtics originally appeared on NBC Sports Boston

It’s a team that can watch its two All-Star wings erupt in concert one night as the offense hums, then endure a 28-2 run a couple nights later while those same two players consistently cough up the basketball and the team operates with the efficiency of a youth basketball squad.

The Celtics are a team that can routinely shoot itself in the foot in late-game situations throughout the year but tighten up against the top squad in the Eastern Conference and steal a game it had no business winning as Boston did Saturday night against the Chicago Bulls.

It is those maddening inconsistencies that made us wonder last week if the Celtics might be better off downshifting this season and embracing some of the bumps in the road with hopes of accelerating their trek back to contender status.

Forsberg: Celtics should be looking for pieces, not thinking drastic 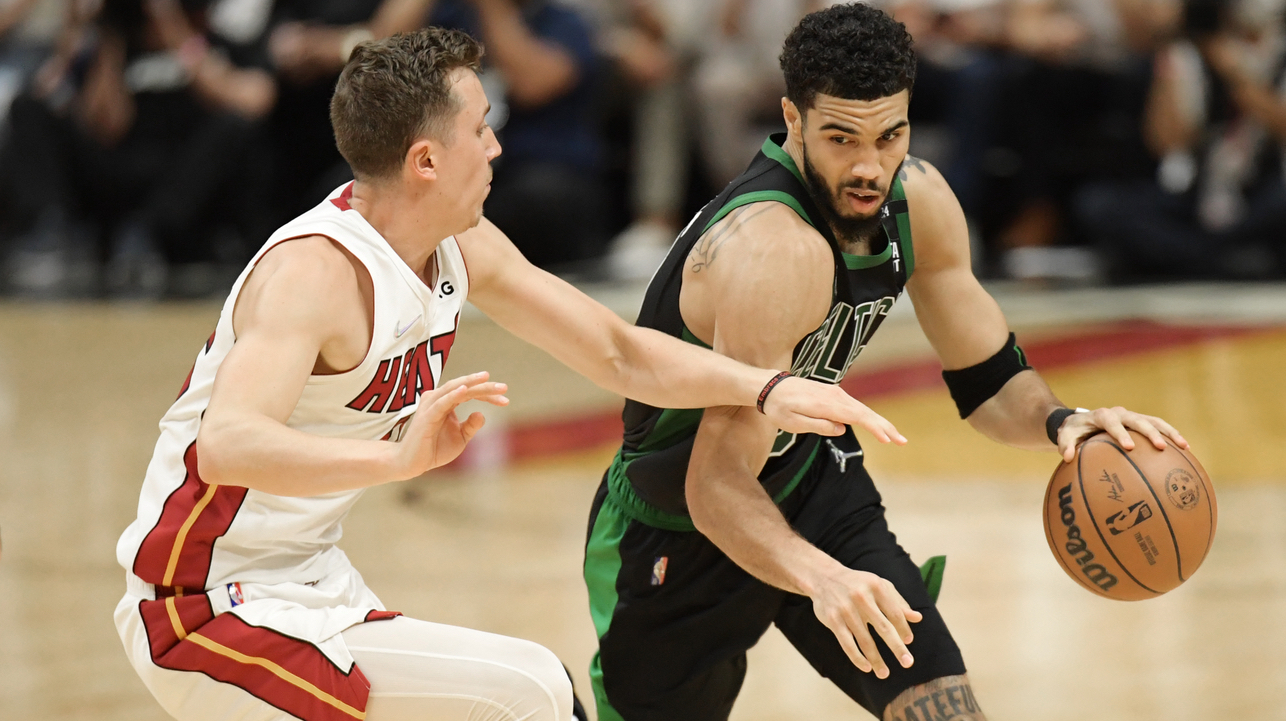 But the Celtics are not a team capable of completely bottoming out like some would-be tankers and that does limit the appeal of that route. We’re also on record that "blowing up" the roster and making midseason overhauls to the core of this team is almost certainly shortsighted as well, though we admit that, after two-plus seasons of .500 play, nothing is off the table beyond trading Jayson Tatum (and almost certainly Jaylen Brown, too).

Is there a middle road the Celtics can navigate? The mere suggestion leaves us squirming because there is no worse place for an NBA team to be stuck than somewhere between the tankers and contenders. It can leave you stranded on the treadmill of mediocrity.

But the Celtics, in a quest to give this core every chance to work and trying to maintain flexibility for a potential big-splash addition, might have no better option than taking the middle road while keeping their fingers crossed for the sort of late-season surge that simply seems unlikely based on their play to this point.

What might first-year president of basketball operations Brad Stevens’ plan of attack look like if he selects the middle road? These would be some of the objectives:

It’s quite obvious that Boston’s biggest deficiency at the moment is shooting. As good as Al Horford has been at times, his 3-point shot has defied him, leaving the Celtics trotting out a starting lineup that surrounds the Jays with three non-shooters and makes it virtually impossible for them to play to their potential (unless, like in that second Indiana game this week, the Jays make a barrage of their own 3-point shots).

Maybe first-year coach Ime Udoka will eventually embrace a minor swap like moving Grant Williams onto that starting group. But even with Josh Richardson’s 3-point success this season, Boston’s sub units still desperately need an infusion of shooting, too.

The obvious move, as has been suggested repeatedly, is moving out Dennis Schroder. While Schroder has a good amount of fans inside the Celtics organization and his ability to thrive as a spot starter has saved Boston from an even more clamorous start, the Celtics would be better off trimming salary and bringing back some combination of a small draft asset (second-round pick), a low-priced shooter the team might be able to carry into future seasons, and/or cap relief.

Moving on from Schroder also opens a pathway for Payton Pritchard to be a more consistent presence as a backup point guard. Even as he works his way out of a sophomore slump, Pritchard’s threat of shooting can help the Celtics while they assess his longer-term role with the team.

The Celtics have to decide which younger players they’re willing to invest in. If Boston simply isn’t going to carve out consistent minutes for recent lottery picks Aaron Nesmith or Romeo Langford, then the team ought to move them before their already-limited value evaporates.

The Celtics have to decide which younger players they’re willing to invest in. If Boston simply isn’t going to carve out consistent minutes for recent lottery picks Aaron Nesmith or Romeo Langford, then the team ought to move them before their already-limited value evaporates. Us media types can’t complain about not playing the kids if the Celtics don’t have as many kids on the roster. Langford is set to earn $5.6 million next season, a rather substantial number if the team isn’t going to invest in him now.

The Celtics should be investigating potential suitors for Juancho Hernangomez, a veteran who started the team’s first preseason game and has rarely been seen since. Maybe a contender is willing to take on his $6.9 million salary because he’s essentially an expiring deal being nonguaranteed next season. Maybe that’s wishful thinking based on Hernangomez’s limited contributions this season.

Sending out Schroder and Hernangomez would trim nearly $13 million from the payroll. Boston could take back in the neighborhood of $9 million and still remain below the tax, which would help the team avoid stiff repeater penalties moving forward. Ownership also gets a healthy rebate check in that instance, but the bigger positive would be a potential willingness to spend moving forward.

Boston, with help from its many available traded player exceptions, could use that ability to take on salary to be a third team in other potential deadline deals. Boston could take on salary in exchange for draft assets then simply buy out players that don’t have a future here.

This middle path likely doesn’t budge the Celtics far from their roller coaster ways. But a better balanced roster could potentially aid a quest for consistency. Boston would still be crossing its fingers with hopes of a late-season surge but is most likely a play-in or bottom-of-the-East bracket team that is hard-pressed to get past Round 1.

The core of this team still gets another 35 games together to figure out if the combination of the Jays, Robert Williams, and Marcus Smart can thrive with better complementary pieces. Udoka gets 35 more games to grow as a first-year coach and work through some of his decisions that have hindered this team at times. Williams has been one of the biggest bright spots this season and Smart has played well when he’s embraced a defense/playmaking role and doesn’t step too far outside it.

The Celtics would still have multiple potential paths to adding an impact talent -- whether by seeking cap space this summer, or packaging veterans like Richardson and Horford with whatever draft assets are accumulated to seek a big-ticket veteran.

We’d make the case that stepping backwards for a more glitzy draft pick might better aid a quest for that sort of trade, but we understand the Celtics are not in position to bottom out the way some tank-embracing teams might to improve their odds at a top pick. And it’s hard for anyone in Boston to wave the white flag on any season in which Tatum and Brown are healthy.

It’s not a very glitzy path and doesn’t guarantee the Celtics ever escape their middling ways. Celtics fans are eager to hop off this roller coaster but might simply have to buckle up.