Although not perceptible by Tuesday’s weather, New England is on the verge of a significant warming trend that will open a multi-day stretch of warmer-than-normal weather set to include the New Year’s weekend.

For now, cool air continues to hold on in New England, which has been great news for skiers, snowboarders and, where enough snow is left on the trails, snowmobilers. While the coming forecast, unfortunately, will deliver rain to even the farthest northern reaches of New England, for now daytime high temperatures in the 30s regionwide and 20s in the mountains with overnight lows in the teens have kept conditions decent after grooming crews worked so hard to recondition trails after this past weekend’s storm.

A fresh westerly breeze Tuesday will hold wind chill values in the 20s regionwide, even as early clouds yield to strengthening sun, but the wind quiets under a clear sky Tuesday night. Our First Alert Team expects clouds to fill the sky again Wednesday, as a clash of air sets up in the sky overhead. Milder air aloft will be colliding with our recent chilly air, producing scattered mountain snow showers and some flurries in central and southern New England. The clouds will help to keep any temperature rebound limited after the cold start, though highs will likely still near 40 degrees by day’s end in southern New England.

From Wednesday on, it’s all about milder air – temperatures will rise steadily each day through late week and into the weekend, as two storms track from the central United States across the Upper Great Lakes into Ontario. The clockwise circulation of air around these storm centers will encourage a south and southwest wind flow through a deep layer of the atmosphere into New England, delivering enough warmth for daytime highs around 50 degrees by Friday and into the 50s Saturday and Sunday.

Although the time of rain arrival Saturday is still somewhat flexible this far out, our First Alert Team estimates an arrival Saturday evening and a departure sometime around midday or early afternoon on New Year’s Day, meaning First Night festivities look wet as our best guess.

With a large and persistent high pressure “ridge” building off the East Coast, over the Western Atlantic, and a clockwise flow of air around its center, this only encourages the mild southerly wind flow to continue deep into next week, with the early call in our exclusive First Alert 10-day forecast for more warm showers at the middle of next week. 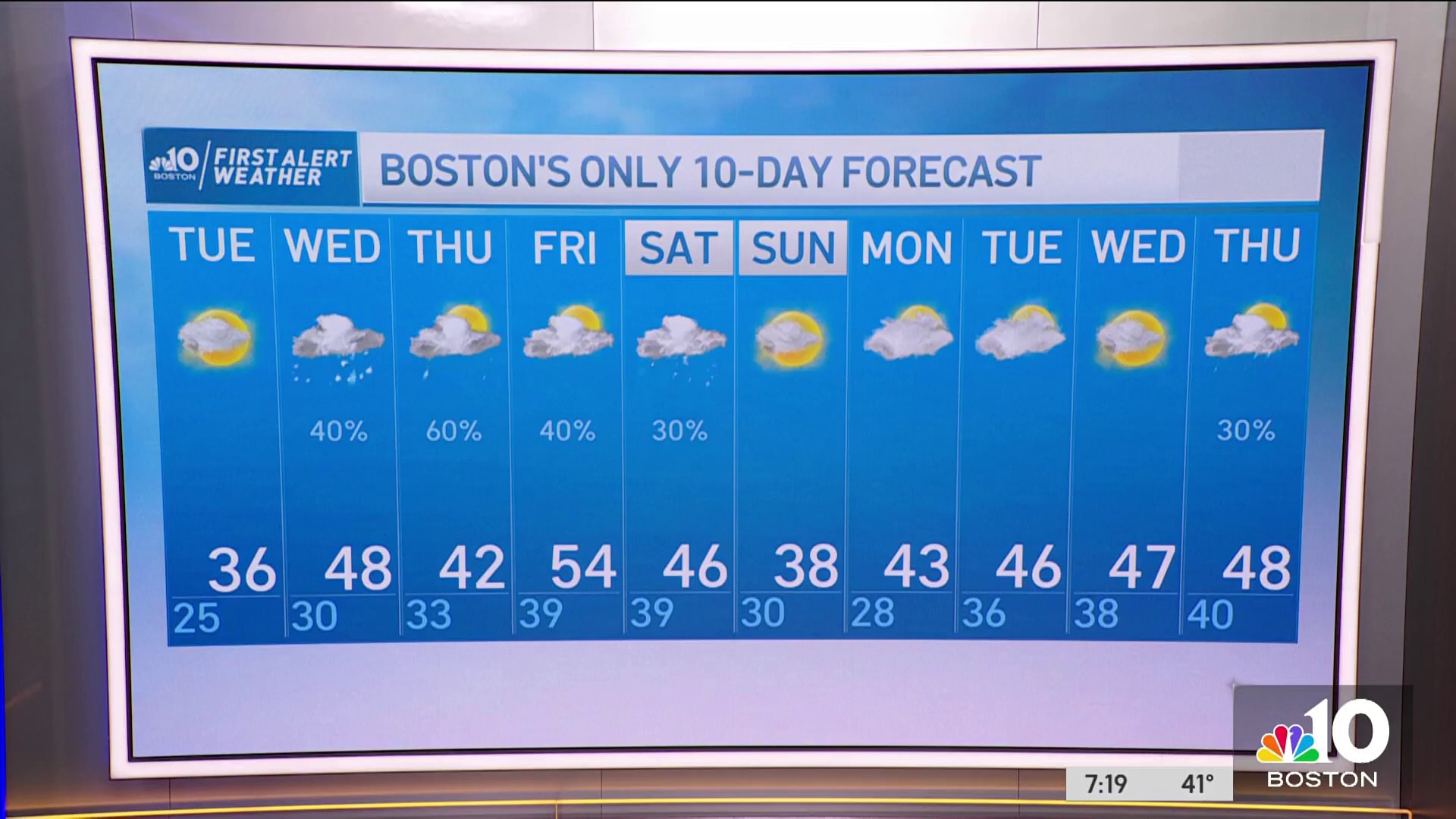 At this point, there doesn’t appear to be much chance for a pattern change toward something colder and perhaps snowier until at least Jan. 9 or 10, well off the 10-day forecast!