Snow to Subside, Mild Air Set to Return: What It Means for Roads

New England will see a quick turn-around in weather through midweek, and deep winter cold remains on the distant horizon

The last couple of weeks, we only seem to get enough cold air into New England for snow when the wind cranks out of the north to carry cold southward from Eastern Canada.

Thanks to the nearby ocean storm – a powerful storm still presenting with an eye feature over the Atlantic Ocean Monday morning – we got that northerly wind over the weekend and that supported widespread snow Sunday into Monday.

Although this has meant slick spots for Dr. Martin Luther King Jr. Day, the trend on roadways should be toward improvement Monday late morning onward for two reasons: 1) the intensity of precipitation will be lighter and, 2) the temperature will rise by 3-5 degrees, with above-freezing air temperatures assisting road treatments in turning slush and slop to water on road surfaces, leaving driveways and walkways the messiest spots.

Western and central New England will gradually dry the air Monday afternoon and evening, while bands of snow and rain showers continue to come and go across eastern New England, accumulating a fresh two to four inches in much of Maine over the course of the day, while measuring less farther south but keeping roads wet into the evening and night across southeastern New Hampshire and eastern Massachusetts, where partial clearing after midnight will mean icy spots needing continued road treatment into dawn Tuesday.

Some sunshine Tuesday will be a nice change of pace, helping temperatures to rebound into the 40s for many, 30s in northern New England, before clouds increase late Tuesday and a quick-moving disturbance aloft delivers some scattered late evening and night rain and snow showers of little consequence to New England.

Behind that disturbance, another installment of milder air arrives for midweek, with Wednesday's forecast high temperatures near 50 degrees in southern New England and squarely in the 40s for the rest of the six-state region. 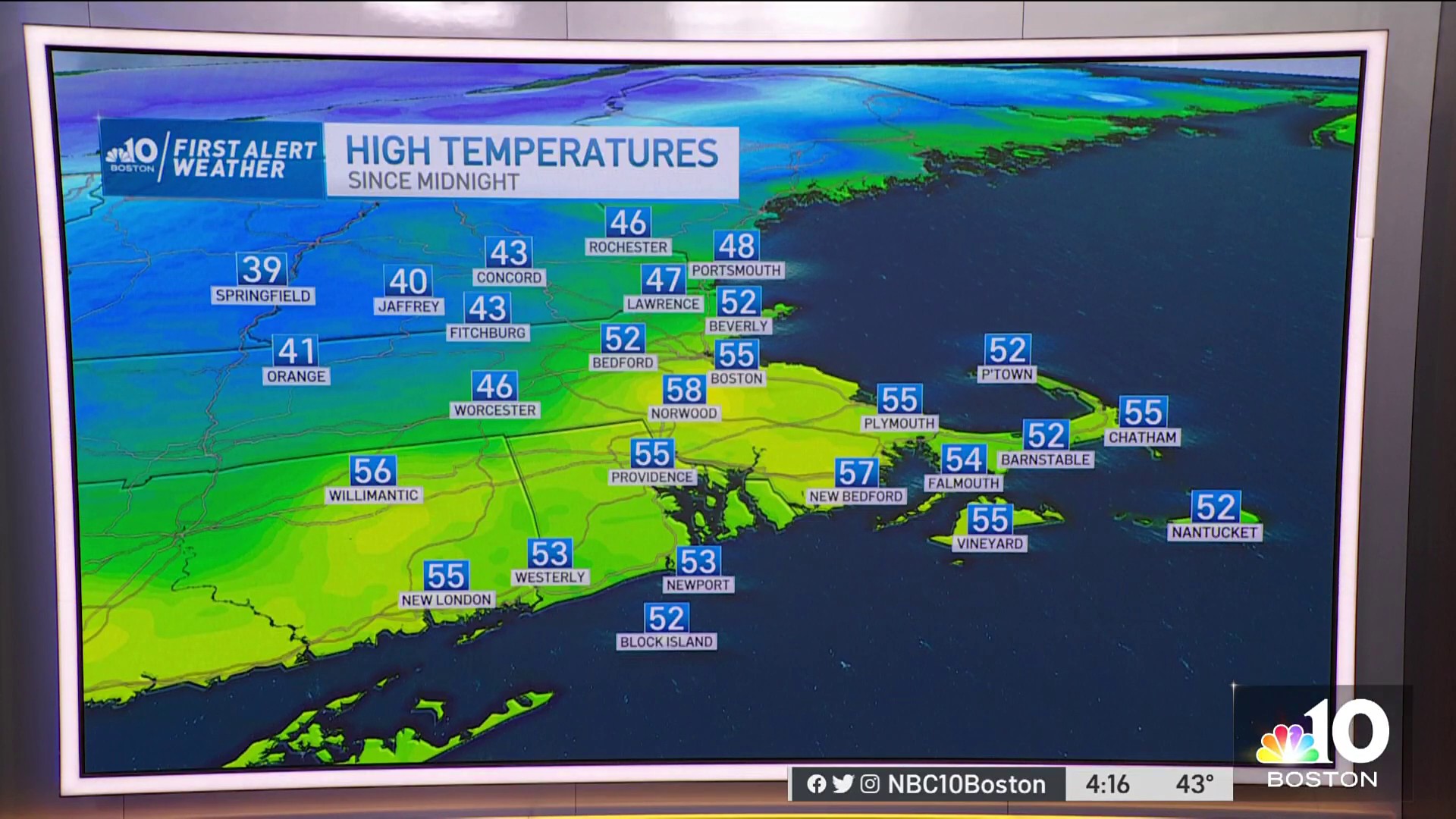 Breezy and Chilly Thursday in Boston

This will make our next storm system – winding up from the Midwest to the Great Lakes Wednesday into Thursday, then redeveloping near Cape Cod Thursday night into Friday – hard-pressed to deliver snow to southern New England. But ski country very likely will see accumulating snow Thursday into Friday, with over half of foot expected, and even spots farther south, like the Lakes Region of New Hampshire and southern Maine, may get into the accumulating snow zone as well.

Behind the late week storm, a shot of cool and dry air will start the weekend out on a fair note, though by late Sunday another energetic system approaches, raising the potential for rain south and snow or rain north.

One thing that remains consistent in the First Alert 10-day forecast: the absence of deep winter cold in New England, with the chance of more meaningful cold not rising until the final weekend of the month, by the way it looks to our team right now.