Clouds Increase Ahead of Monday's Storm

The high pressure system that gave us dry weather and pleasant quiet conditions Sunday afternoon is leaving soon. Two storms are on their way towards New England, and the first one is arriving Monday.

This system will be bringing a drastic change to the weather pattern that we’ve had these past couple of days.

We’ll see an increase in temperatures, dew points and wind speeds. Our highs will reach the 60s Monday, while on your early commute you’ll likely step out to cloudy skies and scattered showers. 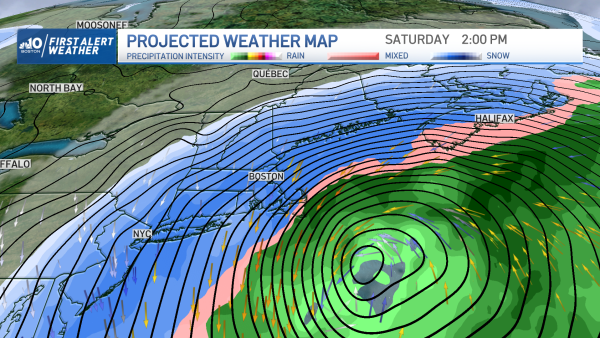 As a break comes in close to midday into the southeast, temperatures will have a chance to climb up and that’s when the heat plays a major role on the second round of rain we’ll be having.

A cold front will push in during the late afternoon/evening and that clash of different air masses will make the energy in the atmosphere grow considerably. This could allow the development of thunderstorms along the cold front, gusting 40-60 mph in localized areas along these storms -- if they successfully form -- with possible impacts including damage to trees and power lines.

Since total rainfall amounts will likely stay below half an inch for most, the concern remains focused on the wind speeds and the wintry mix that could be falling on the back edge of the frontal boundary Monday night.

By Tuesday our temperatures will already be cool, highs in the upper 30s and low 40s with a more noticeable dip into the 30s on Wednesday. We’ll be watching wintry precipitation with this system while its territorial coverage will depend on the temperatures and wind direction that afternoon.

Since for the morning hours our temperatures will be colder, the chance for flurries will take place specifically in the higher elevations in the north and northwest, but as those temperatures increase through the day and the wind shifts direction, the areas along the coast will likely remain with rain or a wintry mix trying to make its way in.

We’ll continue tracking this closely to bring you the best and most updated info on this forecast.

In our exclusive 10-day, our highs will remain below normal through Friday as we warm up to next weekend and rain chances return.