FIRST ALERT: Storm Bringing Over a Foot of Snow to Parts of New England

Steady snow began in Connecticut in the afternoon, arrives in Boston from 9 p.m. to midnight, then moves into Vermont, New Hampshire and southern Maine

Our major winter storm continues to creep closer to New England. A few festive snowflakes will fall before the main shield of snow moves in across eastern New England. But this is not the actual storm. We will dive into the timing, totals, wind and coastal flood threat all below.

TIMING:
The steady snow spreads in for the evening commute across Connecticut between 5 and 8 p.m., then arrives in Boston from 9 p.m. to midnight.

The snow will take a little bit to reach the ground in northern New England as there is some pretty dry air there to overcome.

After midnight, the snow starts for central Vermont, New Hampshire and southern Maine. We will see 1-3 inch snowfall rates per hour between midnight and 7 a.m. Thursday in some of the heavier bands. Some places may even get thundersnow.

The snow continues to pile up in the morning, not letting up until the afternoon. By mid afternoon (2-4 p.m.) the snow shuts down west to east. The south shore in Massachusetts will continue to see ocean-effect snow showers in the evening, but the main storm has moved on at that point.

A midweek storm could turn into a blizzard in parts of New England, but at least it should leave some snow on the ground for Christmas morning. Here's our Snowcap with meteorologist Pamela Gardner.

The snow consistency varies. Southeastern Massachusetts will see heavy snow like cement. Northern Connecticut, Boston and the Massachusetts Turnpike will see more fluffy consistency with temperatures in the 20s for the storm producing the higher snow ratios. Northern New England will just need a broom to sweep away the very light fluff.

WIND GUSTS:
After midnight, we see the winds pick up with gusts between 45 and 55 mph at the coast from the northeast and 35-35 mph inland with the winds. We stay windy through the morning and early afternoon. The wind shuts down slowly from west to east as the snow shuts down late in the afternoon.

COASTAL FLOODING:
We have high astronomical tides due to this week's new moon. With the northeast wind cranking up overnight into Thursday morning, wave heights offshore may get to 10-20 feet.

The storm doesn't have a lot of time to build, so after the 1 p.m. high tide Thursday, the largest flood threat ends. Minor splashover, moderate beach erosion, and shoreline road inundation of 1-2 feet is likely in the typical low-lying areas.

Preparing for the Upcoming Snowstorm 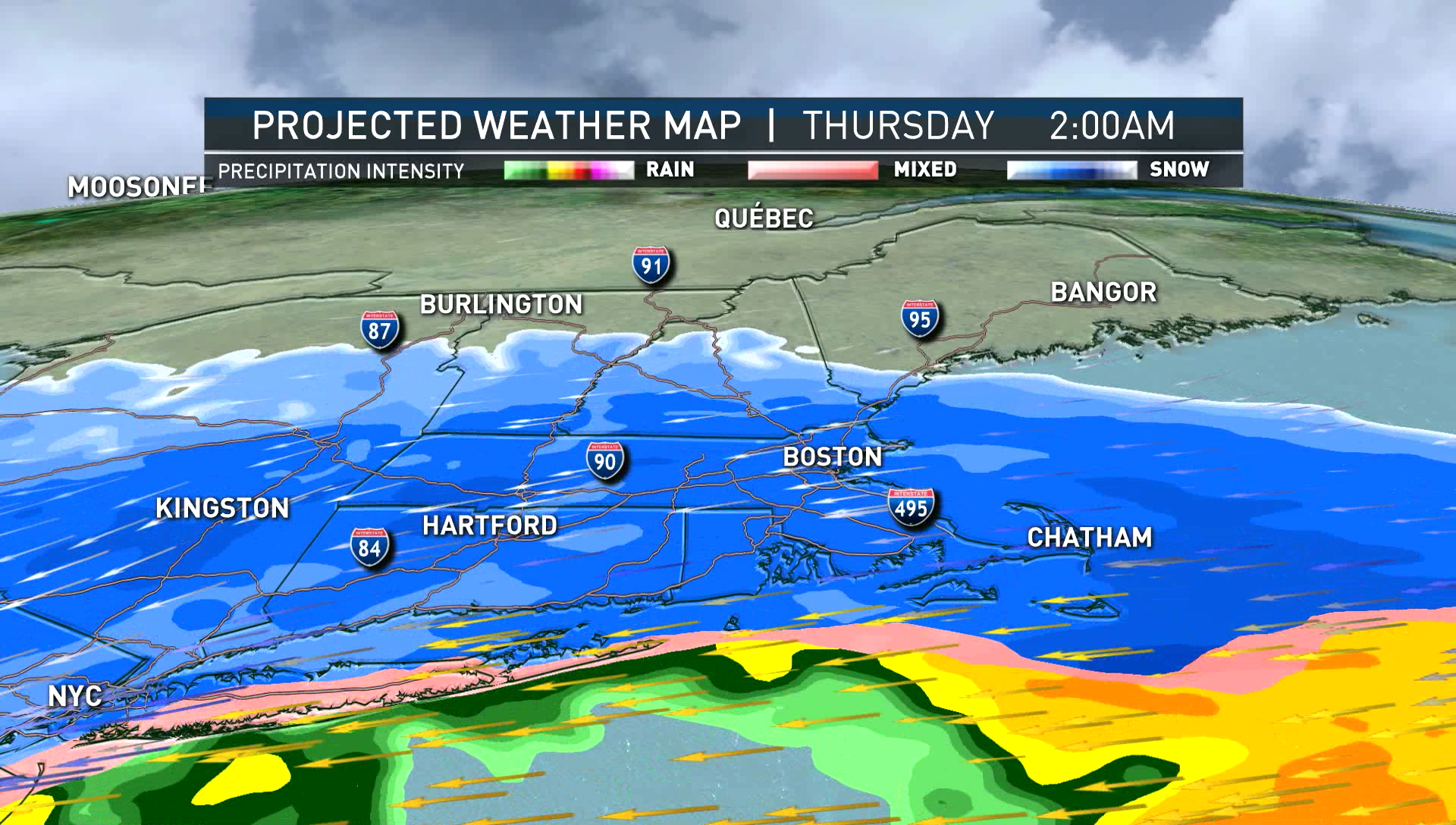 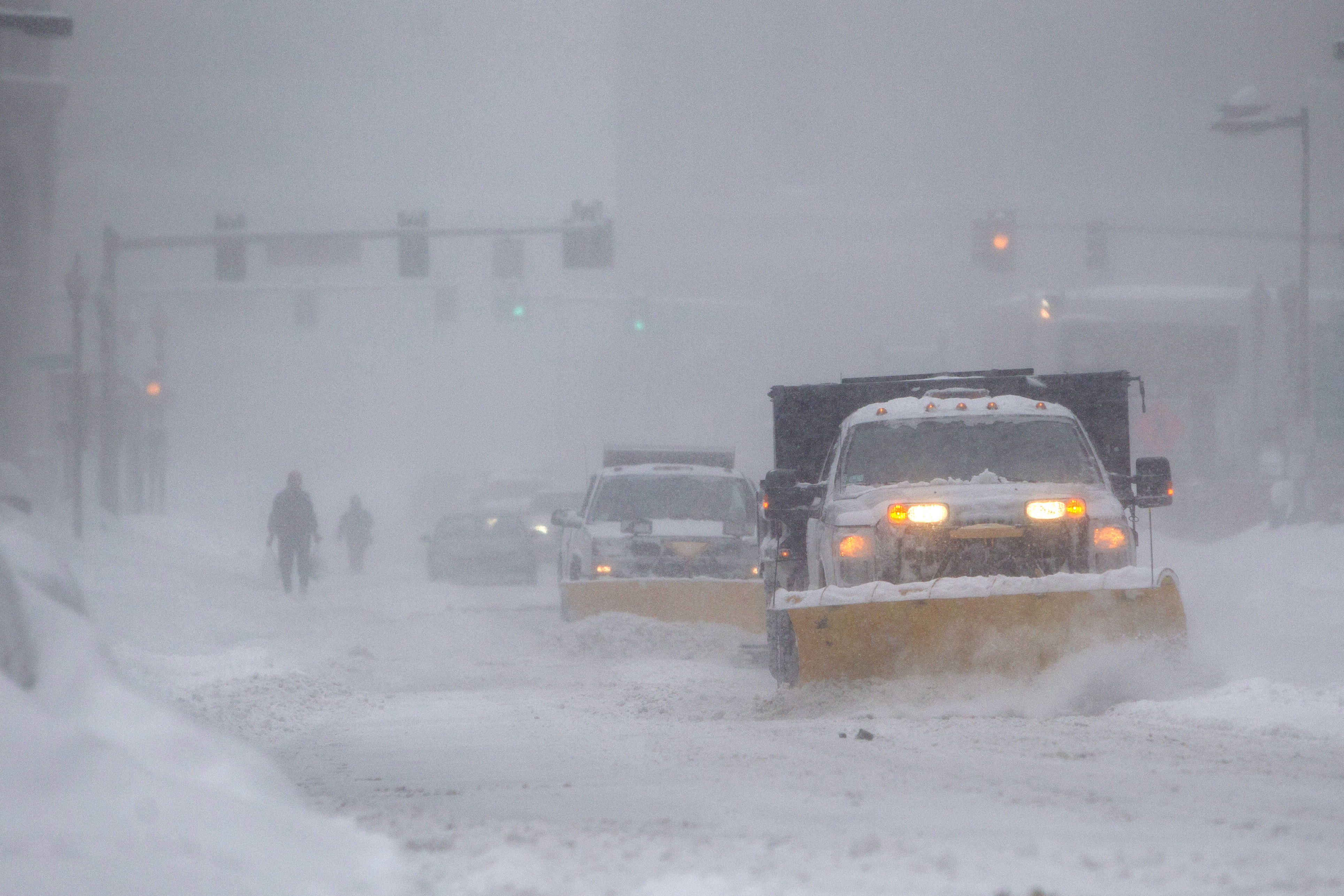 10-DAY OUTLOOK:
We will watch for temperatures to fall a tad more after this storm and a deep freeze will take over for all Thursday night except on Cape Cod. We stay dry with highs near freezing Friday and Saturday.

A wintry mix is possible Sunday into Monday. Temperatures slowly increase as we near Christmas Eve with possible rain. We then switch to some flurries on Christmas Day. Stay tuned!