Summer Heat Will Make a Comeback This Week. Here's When

A mid-summer pattern returns to the exclusive 10-day forecast

The steady rains of the last couple of days have subsided for Memorial Day – at least for most of New England, though Mainers and northern New Hampshire will see periodic rain and showers persisting as the responsible storm center drifts over the Pine Tree State.

Elsewhere in New England, drying is moving in from the south and west, meaning most of southern and Wwestern New England will avoid new rain showers Monday afternoon, though communities near and north of the Massachusetts Turnpike may still find a few renewed showers between 1 p.m. and 3:30 p.m. before breaks in the clouds emerge from west to east for late day and sunset.

The recent rainfall has sent pollen counts plummeting, which is welcome news for allergy sufferers and the clouds mean sunburns won’t be a problem this Memorial Day! 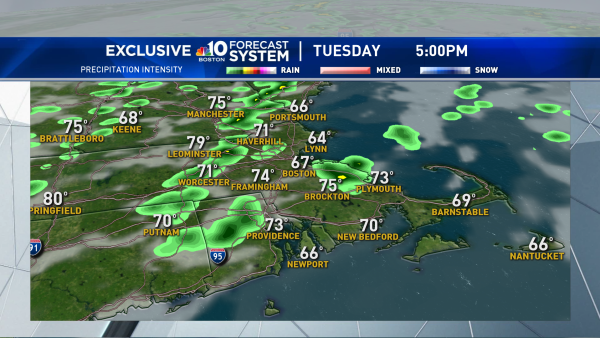 In fact, with an abundance of clouds, even a change in the wind direction to blow from the west won’t be enough to bump temperatures much above 60 degrees Monday afternoon, but more sunshine and a warmer air Tuesday will afford 70s for most.

Tuesday brings a quick-moving disturbance aloft, capable of touching off scattered afternoon showers in northern New England but likely only an afternoon isolated sprinkle central and south.  From Tuesday onward, the exclusive 10-day forecast is essentially broken into two parts: late spring and mid-summer.  The late spring weather Wednesday through Friday comes as warmth and humidity slowly returns to the northeast, delivering an increasing chance of showers and thunderstorms each day, mostly focused during the second half of the day, while daily high temperatures hover either side of 80 degrees.

As the jet stream winds aloft – the fast river of air, high in the sky, that steers storm systems and separates northern cool from southern warmth – continue to shift north, warmer air will continue to take over and, eventually, as the heat overcomes the warm/cool battle of air, the number of thunderstorms likely will diminish somewhat in mid-summer heat expected Sunday into the middle of next week, until an approaching cold front focuses new thunderstorms as it approaches at midweek.