Humidity Rises as Remnant of Tropical Storm Fred Moves in

By Thursday, the remnant moisture of Fred will move overhead, bringing areas of rain, perhaps heavy at times in southern New England

Sunshine will be somewhat limited across the region today as clouds increase ahead of a warm from approaching from our west. This warm front represents the leading edge of more humid air that will return to New England.

Many of us will sneak in a dry day today with the exception of far western New England where a few evening showers are possible, particularly through Vermont.

Tonight, expect passing showers and perhaps a rumble of thunder in northern New England as the warm front lifts north. There will be some hit or miss showers and isolated thunder tomorrow, primarily away from the coast through the interior.

It’s not a day to cancel outdoor plans, but it’s worth having the umbrella with you incase you have to dodge some raindrops. I do think we’ll mange to see a few breaks of sun, but overall the clouds will dominate. 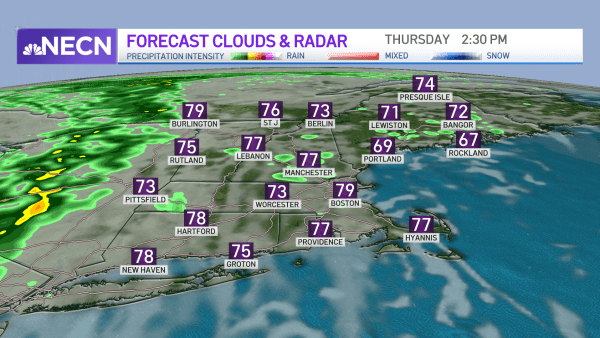 By Thursday, the remnant moisture of Fred will move overhead, bringing areas of rain, perhaps heavy at times in southern New England.

We’ll still need to monitor the threat for some localized flooding, but it’s tough to say exactly where this could set up. Some pockets of rain and showers are likely to linger into Friday as well.

The weekend should feature some slight improvements, although there will still be some pop-up showers around with upper level energy nearby.

We'll also see some building surf and rip current risk as Tropical Storm Henri churns up the seas a bit (but stays well southeast of us).

Our pattern stays a bit unsettled heading into next week as well; clouds and daily shower chances will continue through midweek with highs either side of 80.