A solar flare ejected from the sun on Monday, and since then it's become clear that what's called a coronal mass ejection, or a large cloud of energetic particles, was also released and is headed for earth.

This coronal mass ejection, or CME, is predicted to arrive later on Wednesday and will initiate what's called a "geomagnetic storm" -- the excitement of particles high in our atmosphere that can result in displays of the Northern Lights.

The first display comes Wednesday night, but there are a few problems -- much of New England will spend most of the night under cloud cover.

By Thursday night the sky should be partly cloudy or mostly clear and – provided nothing changes over the next 24 hours – it looks like New England is set up for a rare and exciting opportunity to view the Northern Lights.

Although it’s possible the forecast of incoming radiation could change in the coming day, right now it looks sufficient to send a Northern Lights display all the way into the low northern horizon of Boston and perhaps even as far south as New York City! Ironically, the one exception to mostly clear sky and good viewing conditions may be near the Canada border, where the aurora would be strongest but clouds may be stubborn. 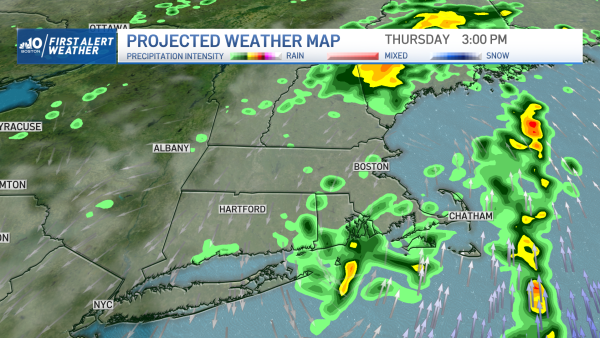 After Rainy Thursday, Summer Weather Returns for the Weekend

Elsewhere, find someplace dark and try your luck at this breathtaking phenomenon!

Take a look at the sky in Finland as the Northern Lights put on a show.